WASHINGTON -- Christmas may be seven months away, but Texas is ready for it.

State lawmakers there waged their own battle against the so-called War on Christmas on Friday, passing legislation, House Bill 308, that allows public school teachers to say "Merry Christmas" or "Happy Hanukkah" and display Christmas trees, nativity scenes or menorahs. Winter displays must represent more than one religion or include secular symbols.

But while the legislation specifies that schools may not constitutionally favor one religion over another, the bill is named for only one religion's holiday -- Christmas.

"Teachers have enough on their plate to worry about [whether] the school district's going to be sued or if they can call a Christmas tree a Christmas tree," said state Rep. Dwayne Bohac (R), who sponsored the legislation.

He told KTBC in Austin that he came up with the idea when his six-year-old son told him about how he had "decorated the holiday tree with holiday ornaments."

"I was a little bit flabbergasted and a little bit upset that we've become so politically correct that we can't call a federal holiday by its name," said Bohac.

State Sen. Robert Nichols (R), who introduced the companion bill in the Senate, said he feared it was "becoming less culturally acceptable to openly celebrate these holidays in the ways past generations have."

Backers of the bill even set up a website and petition to drum up support: 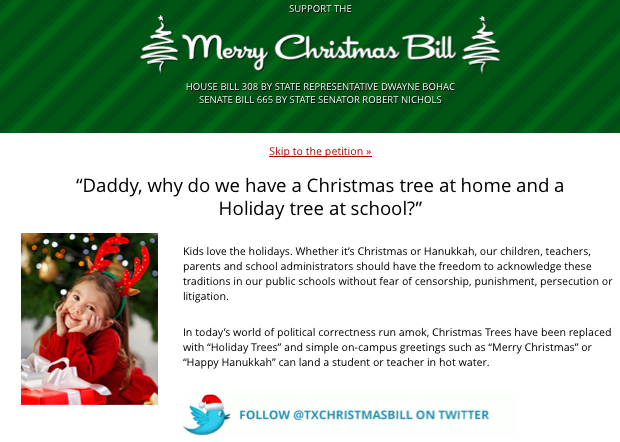 Since the bill has now passed both the House and Senate, it heads to Gov. Rick Perry's (R) desk for his signature. Asked for comment on whether the governor would sign the bill, Perry spokesman Josh Havens told The Huffington Post, "This bill is about the freedom of religion, not freedom from religion, and Gov. Perry supports it."

For years, Fox News has been warning viewers of a War on Christmas, with host Bill O'Reilly covering it more than the actual wars going on.

Linda Bridges, president of the Texas branch of the American Federation of Teachers, told KTBC that she believed there were more important issues for the legislature to be working on.

"I think I can honestly say I've never had a question from a teacher about what they can and can't do around holidays," said Bridges. "I think we really have to say, does this help education when we are caught up in discussions that have become pure partisan discussions? That is not the way we should be looking at education."

This article was updated with comment from a spokesman for Rick Perry.