At least six people have been jailed in Texas over the past two years for owing money on payday loans, according to a damning new analysis of public court records.

The economic advocacy group Texas Appleseed found that more than 1,500 debtors have been hit with criminal charges in the state -- even though Texas enacted a law in 2012 explicitly prohibiting lenders from using criminal charges to collect debts.

According to Appleseed's review, 1,576 criminal complaints were issued against debtors in eight Texas counties between 2012 and 2014. These complaints were often filed by courts with minimal review and based solely on the payday lender's word and frequently flimsy evidence. As a result, borrowers have been forced to repay at least $166,000, the group found.

Appleseed included this analysis in a Dec. 17 letter sent to the Consumer Financial Protection Bureau, the Texas attorney general's office and several other government entities.

It wasn't supposed to be this way. Using criminal courts as debt collection agencies is against federal law, the Texas constitution and the state’s penal code. To clarify the state law, in 2012 the Texas legislature passed legislation that explicitly describes the circumstances under which lenders are prohibited from pursuing criminal charges against borrowers.

It’s quite simple: In Texas, failure to repay a loan is a civil, not a criminal, matter. Payday lenders cannot pursue criminal charges against borrowers unless fraud or another crime is clearly established.

In 2013, a devastating Texas Observer investigation documented widespread use of criminal charges against borrowers before the clarification to state law was passed. 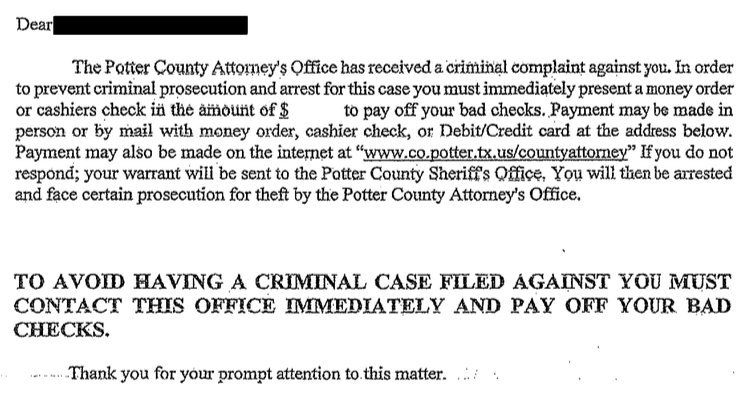 Ms. Jones, a 71-year-old who asked that her first name not be published in order to protect her privacy, was one of those 1,576 cases. (The Huffington Post reviewed and confirmed the court records associated with her case.) On March 3, 2012, Jones borrowed $250 from an Austin franchise of Cash Plus, a payday lender, after losing her job as a receptionist.

Four months later, she owed almost $1,000 and faced the possibility of jail time if she didn’t pay up.

The issue for Ms. Jones -- and most other payday borrowers who face criminal charges -- came down to a check. It’s standard practice at payday lenders for borrowers to leave either a check or a bank account number to obtain a loan. These checks and debit authorizations are the backbone of the payday lending system. They’re also the backbone of most criminal charges against payday borrowers.

Ms. Jones initially obtained her loan by writing Cash Plus a check for $271.91 -- the full amount of the loan plus interest and fees -- with the understanding that the check was not to be cashed unless she failed to make her payments. The next month, when the loan came due, Jones didn’t have the money to pay in full. She made a partial payment, rolling over the loan for another month and asking if she could create a payment plan to pay back the remainder. But Jones told HuffPost that CashPlus rejected her request and instead deposited her initial check.

Jones' check to Cash Plus was returned with a notice that her bank account had been closed. She was then criminally charged with bad check writing. Thanks to county fines, Jones now owed $918.91 -- just four months after she had borrowed $250.

In Texas, bad check writing and "theft by check" are Class B misdemeanors, punishable by up to 180 days in jail as well as potential fines and additional consequences. In the typical "hot check" case, a person writes a check that they know will bounce in order to buy something.

But Texas law is clear that checks written to secure a payday loan, like Jones’, are not "hot checks." If the lender cashes the check when the loan is due and it bounces, the assumption isn’t that the borrower stole money by writing a hot check –- it’s just that they can’t repay their loan.

That doesn’t mean that loan transactions are exempt from Texas criminal law. However, the intent of the 2012 clarification to state law is that a bounced check written to a payday lender alone cannot justify criminal charges.

Yet in Texas, criminal charges are frequently substantiated by little more than the lender's word and evidence that is often inadequate. For instance, the criminal complaint against Jones simply includes a photocopy of her bounced check.

Making matters worse, Texas Justice of the Peace courts, which handle claims under $10,000, appear to be rubber-stamping bad check affidavits as they receive them and indiscriminately filing criminal charges. Once the charges are filed, the borrower must enter a plea or face an arrest warrant. If the borrower pleads guilty, they must pay a fine on top of the amount owed to the lender.

Jones moved after she borrowing from Cash Plus, so she did not get notice of the charges by mail. Instead, a county constable showed up at her new address. Jones said she was terrified and embarrassed by the charges. She had to enter a plea in the case or else face an arrest warrant and possible jail time. In addition to the fines, Jones was unable to renew her driver's license until the case was resolved.

Craig Wells, the president and CEO of Cash Plus, which is based in California but has about 100 franchises in 13 states, told HuffPost that “this was the first I’ve heard of this case.” He said that the company instructs its franchises to adhere to all state laws and regulations. On the company’s website, Wells says his goal is for Cash Plus to be “as-close-to-perfect-a-business-as-one-can-get," adding that the company’s “top-notch customer experience keeps them coming back over and over again. ”

Emilio Herrera, the Cash Plus franchisee who submitted the affidavit against Jones, told HuffPost that he does not remember her case. But he added that he tries to work out payment plans with all his customers, and that it is common for his customers to pay back loans in very small increments.

In response to a request for comment from HuffPost about Appleseed's letter, Consumer Financial Protection Bureau spokesman Sam Gilford said, "Consumers should not be subjected to illegal threats when they are struggling to pay their bills, and lenders should not expect to break the law without consequences."

But Travis County Attorney David Escamilla told HuffPost that his office had never instructed the Justice of the Peace courts to approve all bad check complaints, and said he did not know why or where Steeg would have gotten that understanding. “We don’t do it,” Escamilla said, referring to the usage of the criminal hot checks process to enforce the terms of lending agreements.

When cases are wrongfully filed by payday lenders, how quickly they are dismissed depends on prosecutors' workload and judgment. Often, it is not clear that theft by check cases are payday loans, since the name of the payday lender is not immediately distinguishable from that of an ordinary merchant.

District attorneys may also receive these complaints and have the ability to file criminal charges. According to Ann Baddour, a policy analyst at Appleseed, the DAs seem to operate with more discretion than the county attorneys, but the outcomes were arguably as perverse. Baddour said one DA told her that of the hot check complaints he had received, none had led to criminal charges or prosecutions. Instead, he said, his office sent letters threatening criminal charges unless the initial loan amounts plus fees were repaid.

The DA, who seemed to think he was showing evidence of his proper conduct, was instead admitting that his office functioned as a debt collector.

With the help of free legal aid, Jones’ case was eventually dismissed, and she said the court waived her outstanding payment to Cash Plus. But not all debtors are as fortunate.

This success in using criminal charges to coerce money from borrowers means that payday lenders have a financial incentive to file criminal charges against debtors with alarming regularity -- even if those charges are eventually rightfully dismissed.

Because Appleseed’s study only covered eight of Texas’ 254 counties, there are likely more cases statewide. And Texas is not alone. In 2011, The Wall Street Journal found that more than a third of states allow borrowers to be jailed, even though federal law mandates that loan repayment be treated as a civil issue rather than a criminal one.

“There’s a lot more to learn about the practice itself, how widely it’s used, and its effect on consumers,” Mary Spector, a law professor at Southern Methodist University who specializes in debt collection issues, told HuffPost. “I think they’ve uncovered the tip of the iceberg.”