Dale Agostini steered his vehicle down Highway 59, cutting though seemingly endless acres of East Texas pine forest and red dirt on his way to make a business deal.

Agostini’s fiancée, their 16-month-old son, Amir, and a cook in Agostini’s restaurant were in the car that day in September 2007, with more than $50,000 cash that Agostini hoped to use for new restaurant equipment, according to a 2008 class-action civil rights lawsuit he filed in federal court. Cash allowed him to negotiate better deals, according to court documents. Everyone in the car that day was was black and most had immigrated to the U.S.

When the group got close to Tenaha, Texas, a rural town about an hour southwest of Shreveport, La., a constable pulled Agostini over. Highway 59 is a well-known drug trafficking route and the officer summoned a drug-sniffing dog and backup. The constable told Agostini the dog “was a warrant,” searched the car, found the cash and accused Agostini of money-laundering, according to the lawsuit.

The officer arrested the adults and summoned child protective services workers for Amir. Later, after Agostini showed proof that the money came from his business, the prosecution fell apart, according to court documents. Agostini was never charged with a crime and was released from jail. His son was returned. And after several months and considerable expense, he got his money back.

From 2006 to 2008, as many as 1,000 black and Latino drivers traversing Highway 59 near Tenaha were pulled over, searched and had cash or other valuables wrongly seized, according to the American Civil Liberties Union. The suit, filed by an East Texas attorney on behalf of people of color or who appeared to be and were were stopped in Shelby County, was settled this month with help from the ACLU.

Once stopped on the side of the road, drivers were offered two options by law enforcers, according to the lawsuit. The motorists could either sign a form forfeiting their cash, car or other valuables, or they would face felony charges, according to the suit. If a driver opted for an arrest and a chance to see a judge, any children in the car would be turned over to child protective services, according to court documents.

“This was, plain and simple, highway robbery,” said Elora Mukherjee, a New York-based attorney at the ACLU Racial Justice Program. “The facts in Tenaha were some of the worst cases of racial profiling abuses of asset forfeiture that we have seen around the country.”

Both city and county officials in the Teneha area have denied wrongdoing. They agreed to pay nearly $600,000 in legal fees and to have officers record all traffic stops. Under the terms of the settlement, the proceeds of property and cash seizures must be used to purchase audio and video recording equipment for traffic stops, to fund racial profiling education or given to nonprofit agencies, Mukherjee said. A court-appointed monitor will examine the seizure spending four times each year.

“In my heart of hearts, I really do not believe that there was any kind of profiling going on,” said Rick Campbell, the Shelby County judge who oversees county agencies and helps manage the county budget. But even if the county had won the case, legal costs alone would neared $1.5 million and devastated the local budget, Campbell said.

Many of the city and county officials named in the suit are no longer in office. The Shelby County constable who stopped Agonstini and the district attorney have resigned. A district attorney’s office investigator named in the suit has retired. Voters in June turned Tenaha’s mayor out of office after 48 years, ending the term of the longest-serving mayor in Texas history.

Campbell was appointed to the county’s top administrative job in 2009, after the county judge who served during the height of seizure activity on Highway 59 died of cancer.

Campbell said he stands behind the stops. At least 70 percent of the stops involved white drivers, he said. The officer who stopped Agostini and many others on Highway 59 was experienced in another part of the state, where he never got into trouble, Campbell said.

“I do feel like peace officers, when they are out there, need to be able to bring common sense to their work,” said Campbell. “I mean when you look, most inmates in the jail aren’t white. … There were stops where people had $600,000 in the car, but they weren’t buying drugs?”

The officer testified under oath why he suspected some drivers were involved in criminal activity. He said he suspected Puerto Rican drivers or passengers from New York stopped during the middle of the week and who seemed nervous when questioned.

In 2011, Texas changed its forfeiture and seizure laws as a result of news reports about Highway 59. Law enforcement agencies must now account for every cent collected though a seizure or property sale. And law enforcement agencies cannot use the funds to boost officer salaries or to pay bonuses without the permission of an elected body.

There were other instances of asset forfeiture abuses in Texas before the law was changed, the ACLU said. The district attorney's office in Montgomery County used seized money to buy a margarita machine that prosecutors used at the county fair, winning a prize for best margarita. And former Kimble County D.A. Ron Sutton used asset-forfeiture funds to take his entire staff, a district judge and their spouses on a trip to Hawaii. Sutton pleaded guilty in 2010 to felony charges of misusing funds. 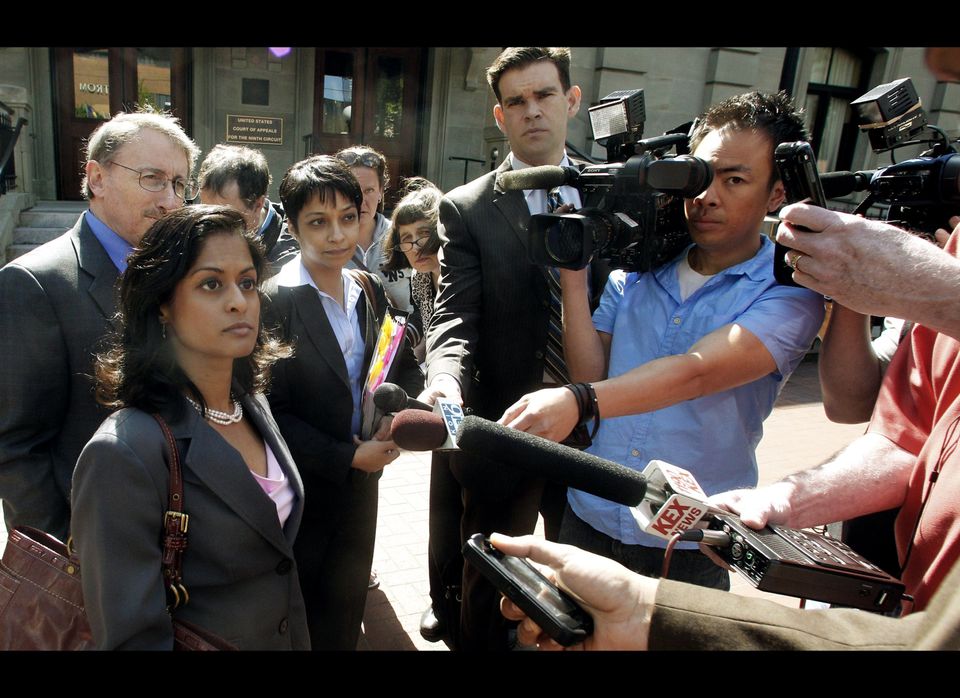 1 / 12
Nusrat Chadoury
FILE - This May 11, 2012, file photo shows Nusrat Chadoury, lead attorney for the plaintiffs, National ACLU National Security Program, talking with reporters following oral arguments on the ACLU No Fly List challenge, in Portland, Ore. A federal appeals court ruled Thursday that a lawsuit over the government's no-fly list can go forward in a lower court in Oregon."More than two years ago, our clients were placed on a secret government blacklist that denied their right to travel without an explanation or chance to confront the evidence against them," Nusrat Choudhury, an ACLU lawyer who argued the case, said in a statement. "The Constitution requires the government to provide our clients a fair chance to clear their names and a court will finally hear their claims." (AP Photo/Rick Bowmer, File)
AP