"There is a tumor. It's about the size of a small grapefruit" The doctor explained. "I think we need to take this very seriously. Your health has been compromised for a long time."

Thus began the conversation that lead to a full hysterectomy at the age of 42. It was a difficult decision to make, because it meant that I would have to give up my dream of bearing a child, but the pain was relentless and the consequences were dire. Photographs of me in public at that time are often labeled "Alarmingly thin!!" because anemia and exhaustion made it impossible for me to maintain a healthy weight. It would be a grueling recovery, but I felt grateful that I had good doctors and the love and support of family and friends. After surgery, tests revealed that my uterine lining had cancerous cells. For women, reproductive health care is total health care. Without it I might not be alive to write this article and that is why I am seeing red in Texas.

It has been a long time since I stood on a sidewalk waving a protest sign. To be sure, I did more than my share of this in my twenties, even going so far as to take a seminar on how to get arrested (note: wear boots in case the cops drag you and keep a toothbrush in your pocket), but the stakes are high. Reproductive health care for well over a hundred thousand women in Texas has just been revoked by the state legislature. They were egged on by the hapless Rick Perry in a move so dunderheaded and thick with ignorance that his performance in the presidential primaries looks studious and reasoned by comparison. Sentient beings in Texas have simply had to stop asking "How stupid can Rick Perry be?" because there is clearly no end to how stupid.

Well known singer and Austin legend Marcia Ball was the first to reach out .This was in her email:

What the heck's happening with our poor country?! Who knew that in 2012 in the USA we would be fighting about contraception and basic women's health?

Next Tuesday, March 6, and the following two Tuesdays, between noon and 2:00 PM, I am going to put on a red shirt and stand in front of the Texas State Capitol at the corner of Congress Avenue and 11th Street holding a sign decrying the defunding of women's health services. I am calling my effort SEEING RED and it may be just me and a few friends or a few hundred. My vigil is in honor of Molly Ivins who said nothing will change until we get out in the streets and bang on pots and pans. I'm just going to stand there and hold a sign

By the way, this is not a "women's movement". Come one, come all. No keynote speakers. No podium. No PA. Just red shirts and signs. Spread the word.

This is how most movements are begun. Someone just gets fed the hell up and decides to fight back. Like most this is a humble beginning, but it is a start and that is something. I knew upon reading her message that I would be there, that I had to stand beside Marcia on behalf of Texas women. So at the appointed hour I made my way through the snarl of traffic that engulfs Austin during the South by Southwest Festival and took up my place in front of the state capitol. Turns out there were between two and three hundred women, men and children on the scene, all sporting red t-shirts and waving home-made signs. A few even brought pots and pans. Most of us didn't visit much, just waved at passing cars and cheered when they acknowledged us. The response was mostly positive. Bus drivers waved, old men in Dodges honked their horns, even a couple of patrol cars gave us the high sign. There was one SUV that drove by and gave us thumbs down with arms thrust defiantly through open windows. 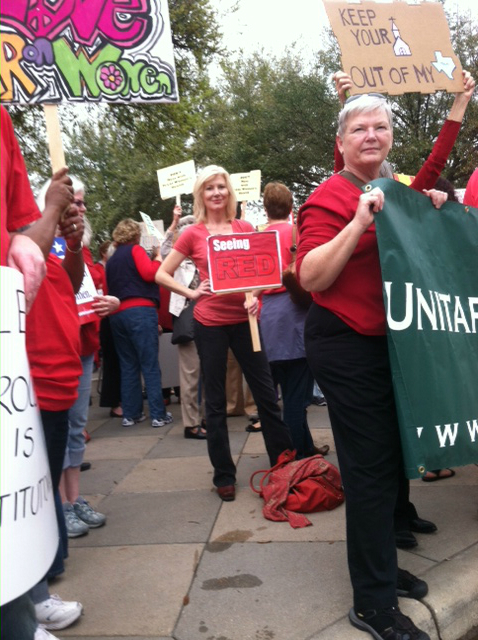 What were they trying to say? " Down with pap smears?" " To hell with mammograms?"

I found myself seeing redder and redder trying to ascertain their point of view and that of the mostly all white male Texas legislature that has decided my body is their business. This decision will mean a loss of 40 million federal dollars to the state. The good ole' boys promise that they are gonna think on a way to fund some of this work... really they are gonna, but in the meantime clinics across Texas have been ordered to begin escorting their clients out the door.

Rick Perry says it is Obama's fault, even though the law that requires states to non-discriminate in their funding was on the books under George W. He considered making a run at this in 2006, but common wisdom held that George W would uphold the law, because it is after all a LAW and cut 'em off, so they waited until now. What better time to defund women's health than while a black man with a funny name is in office? Yes, they were still etching over the "Nigger Head" sign on the family ranch when it somehow occurred to Rick that he could attack every poor woman in the state and blame it on the black guy. Fantastic really. If there were not lives at stake, I would have to concede that this is clever politics.

Alas those pesky lives. Help is on the way for a lot of Americans who are uninsured or under-insured through the Affordable Care Act, but we have a long way to go before not only poor, but middle class women will have the wherewithal for regular screenings and access to birth control. I have two health insurance policies which cost upwards of 600.00 per quarter and this is what they covered last year... nothing. Annual check up? $500.00... covered by insurance? Nope. Eye exam and glasses $650.00... amount covered? Zip. Foot ex-rays 300.00... come on foot ex-rays?... any part of it covered? Zero. Dental checkup? 200.00 plus 300 for more pesky ex-rays... covered? Nada, not a penny. Apparently healthy teeth, eyes, feet and preventative care are not meant for the likes of me. So it is not just the poor that often need to avail themselves of the services of Planned Parenthood and other health clinics. Plenty of women are going to have to debate whether or not they can afford a visit to the gynecologist. Reproductive health care is not cheap and many will put it on the back burner out of necessity.

Now most of you know the facts, that abortion makes up roughly 3 percent of services provided and that federal and state funds can NOT be used to cover the cost of it. So what gives? Why this stupid stupid obsession on the right to shut down women's health care? The "aspirin between the knees" crowd is out to punish those uppity gals over at Planned Parenthood. Snotty educated types like me who think that women have a right to determine when and why and how to create families. Of course it is just regular old Texas women who will bear the brunt of this wild eyed condemnation. Tumors will go un-measured, cancer will go undetected and women will die because these men are obsessed with abortion and any kind of sex related care.

This cannot stand. So I will be out in front of the capitol this Tuesday March 20 at noon with my boots on and a toothbrush in my pocket. If you are in the Austin area come join us. We will be easy to spot. We will be wearing red and by God we will be seeing it too.