Many college kids are returning home for the holidays and haven't been behind the wheel of a car for a while. Remind them to put down their phones and focus on the road. #itcanwait.

One night last summer, my husband and I were lying in bed watching television. At around 10:15 we heard the front door -- our son was home for the evening. There's a sense of calm that comes over a parent, no matter how old their children, when the kids are all safely at home for the night -- and that's what I felt as the door shut and the front light went off.

Then we heard a crash -- the kind of crash no one wants to hear. Metal scraping, cement grinding, terrifying noise. Then we heard a girl scream, and our neighbor yelling "I've called 911."

We rushed outside and this is what we saw: 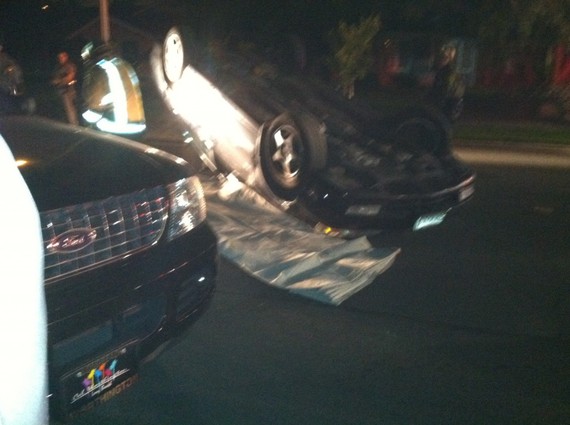 First of all, everyone is fine. Thankfully the young girl driving the car that flipped was wearing her seatbelt (always wear seatbelts! Even in the backseat!). Though she was hanging upside down until the fire department arrived, she emerged with just a few scratches -- and she was scared out of her mind.

This accident happened because the driver was reaching for her phone to read a text.

This sixteen year old girl, who had been driving on her own for less than a week, was so distracted by her phone that she didn't even brake before running into my son's car (that's the Ford Explorer in the foreground of the photos). Though she was traveling at a low speed (15-20 mph), the force of her car was so great that it pushed his truck up onto the sidewalk and caused so much structural damage that his car has been totaled.

I tell you all these details because texting and driving is very, very risky, and really stupid. I have been guilty of doing it myself -- as have most people, I imagine. We think that those 5 seconds are inconsequential, and when we hear that "ding ding" that means we've received a text, that text becomes more important than our safety or the safety of those around us on the road.

Here are some statistics about distracted driving (courtesy Distraction.gov):

Because text messaging requires visual, manual, and cognitive attention from the driver, it is by far the most alarming distraction.

Everyone needs to stop texting and driving. Me, you, my kids, your kids, the people on the freeway weaving back and forth...it's just too dangerous. Tell your family and friends, and don't be afraid to tell the driver of a car you're riding in to stop texting.