When it comes to texting and driving, the problem isn't a lack of awareness about the risk. Ninety-eight percent of people know that it's dangerous, yet three in four are offenders, according to a new survey that AT&T designed with Dr. David Greenfield, founder of The Center for Internet and Technology Addiction and assistant clinical professor of psychiatry at the University of Connecticut School of Medicine.

Texting while driving has been shown to be more dangerous than drunken driving, and it is the leading cause of death for teens in the U.S., according to a 2013 study. Greenfield talked with The Huffington Post about why people continue to text and drive, how they can make themselves stop, and what it will take for it to become as taboo as drinking and driving. 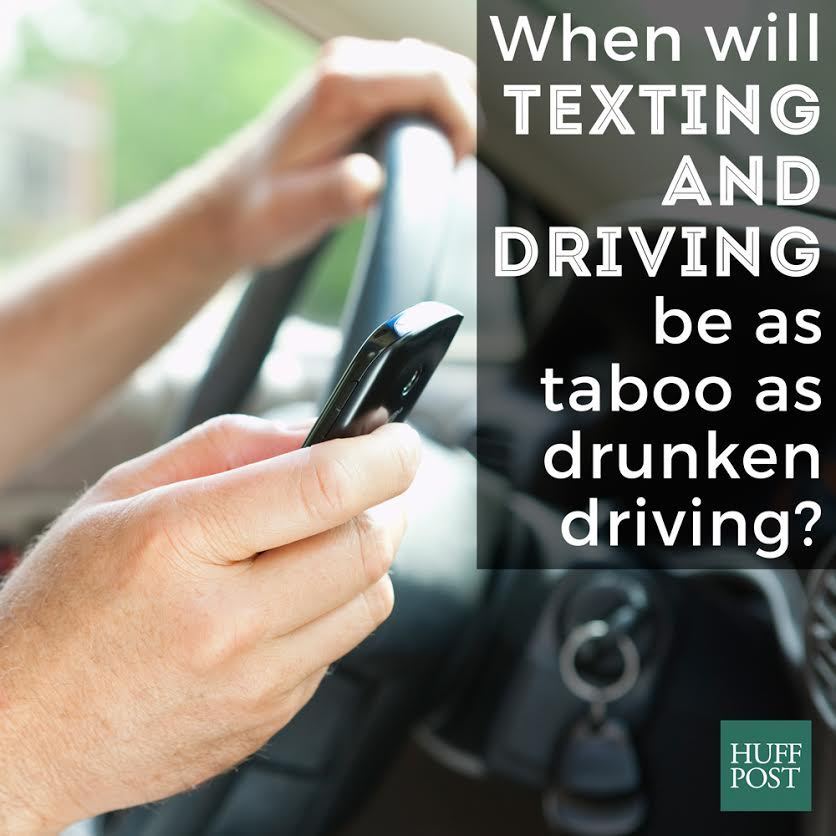 This study showed that nearly everyone knows texting while driving is dangerous, but most people do it anyway. Do people tend to think they are better at multitasking than everyone else?

There are a number of reasons. One of the reasons is that people have the false belief that there is such a thing as multitasking, and they are somehow going to be better at that than other people. That's a distortion. They're assuming that because they're doing it, they must be better at it. But when you roll the dice, the dice have no memory. So each time you get in that car and you text, your chances of having an accident are equal. It's just a matter of statistical odds that eventually you're going to run out of room.

When we hear a text come in, what are the psychological and behavioral triggers that make us want to read it, even though we're aware of the dangers?

People compulsively use their smartphones. Part of it is dopaminergic, meaning there is an elevation of dopamine when there's either an anticipation of receiving a text or when you have checked one and it's positive in nature. That elevation of dopamine is experienced as pleasure, and we like pleasurable things. We tend to repeat them. That can develop into a compulsive pattern. There's the FOMO phenomenon -- the fear of missing out -- that if they don't respond or check in, they're missing out. People also feel like they're going to disappoint people if they're not answering right away.

Why do so many people still text and drive, even though it's been shown to be more dangerous than drunken driving?

If you track the history of drinking and driving, and the drinking and driving movement, there are some very strong analogies. Thirty or 40 years ago, the attitude toward drinking and driving was very much where texting and driving is now. What happened was that Mothers Against Drunk Driving was formed, and some of the mothers of these younger individuals who were killed became very active. There was a multipronged effort aimed at increasing public awareness, public education and some legislative changes, as well as offering medical treatment to people who had problematic drinking. So over time, the consciousness and the norm has shifted drastically around drinking and driving. It's unacceptable, not just from a legal perspective but from a social perspective. And we're not there yet with texting. We joke about being addicted to our phones, and we don't take it seriously that you're five to six times more likely to be in an accident when you text than when you don't.

Is that because people have this distortion that texting doesn't impair their ability to drive?

People completely distort the neurological data that clearly show that it's impossible to drive safely while you're texting. It's not even in the realm of possibility. If you don't get into an accident or don't cause an accident, you just have been lucky. But eventually your luck will run out.

It's not that hard to avoid driving after you've been drinking, but most people have their phones on them all the time. How can they ignore their phones in the car when they rely on them for maps and navigation?

There's no doubt that the integration of the smartphone into our daily lives has been significant. There's nothing wrong with that, but you have to stop when you bring it into the car. I believe the DriveMode app allows you to use your GPS functions but not your messaging functions. People don't get addicted to using their GPS, but they are compulsive texters. And with texting you can't do it without touching the phone, and that's where people run into problems.

Do you have clients who have actually been helped by this type of app?

Among the people I'm involved with in my practice, people have used them very successfully. We always recommend some sort of external app, or we recommend turning the phone off while they're driving. Some people will actually put it in their backseat or put it in their trunk. People have come up with various ways to keep it limited, but the app is the most sophisticated way to do it because you can use some of the functions you might want to use.

If you had to make a prediction, when will we get to the point where texting while driving is considered as bad as drinking and driving?

I don't think it's going to happen in the next six months. I think we're talking about many years. But we've reached a tipping point where it's going to become less acceptable to act like it's no big deal. And as that shifts, people's consciousness and people's willingness to go against social norms will change.

The survey was released in conjunction with expanded access to AT&T DriveMode, a free app that is now available for the iPhone and silences texts when a phone is moving faster than 15 miles per hour.