If you are attached to your iPhone or Droid (gasp) -- let's just say smartphone, for all intents and purposes -- you may want to pay attention to the following rules of texting. If you relate to the aforementioned individual and find yourself in one too many uncomfortable texting situations, we are here to help.

I wanna be cute, but I also don't wanna seem too eager, but I also want him to know I'm interested, but I also need to play hard to get. So, do I text "hi" with two "i's," maybe three? Is that too many? Is one "i" not enough? For this conundrum, follow the general rule of thumb: You may repeat the letter in which you choose up to two times, anything more than that is just eager, annoying and, quite frankly, desperate for the D. Acceptable examples include: hii, heyy, suppp, miss yaaa! Inappropriate examples include this screenshot below. 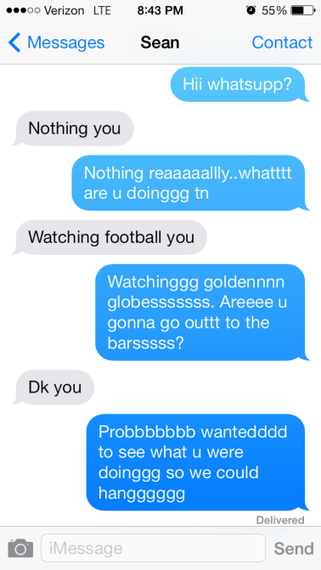 There is a rare breed of texter often referred to as the "double texter." This individual is outgoing, wants to get to know you and doesn't care about the rules of the "texting game" guys and girls play with each other to seem cool. Instead, if he has a question, he'll fucking ask it. If he wants to say "hey" and "what are you up to tonight" in two different text messages, he does it. Lady friends, if you find a guy who double texts, don't let him go, he's rare and outstanding. However, for you, as a general rule, do not double text until you're sure it's OK. By OK, I mean that he does it first. Don't be the annoying "double texter" if it's not appropriate. Also, refrain from too many texts in a row regardless of whom you're talking to, especially if you're trying to avoid the "stage-five clinger" status. 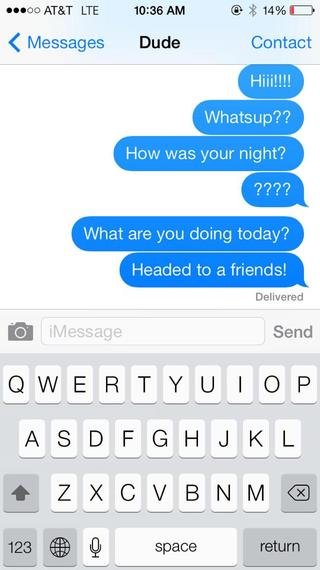 Is something funny? Does your response suffice more than just a simple "lol" response? Also, are you actually laughing out loud? Perhaps you're rolling on the floor laughing or laughing your ass off. Either way, you must respond to this funny text you received with a "haha" or another form of this. Trying to show the receiving end of your text that what he or she said was in fact not funny? Go with a simple "haha." Two ha's; nothing more. But, that's not suggested. Instead, go with "hahah" if something is funny, but not funny enough for a full out brawl laugh. Go with "hahaha" -- three ha's -- if something is hilarious. Add as many ha's to the end of that as you see fit. Don't be too generous with your ha's, however; they shouldn't be as plentiful as the hairs on your unshaved legs throughout the winter months. 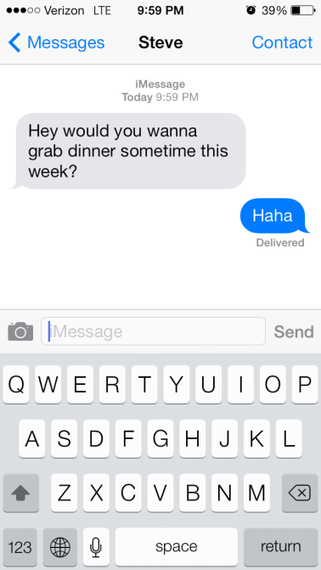 If there's one rule of texting that you must follow, it is the absence of the letter "k." Not from a word­­­, you mustn't misinterpret. What I mean is do not answer with a simple "k." It's rude, unnecessary and uncivilized. It means you're mad, have nothing nice to say and shouldn't say anything at all. My own mother makes the mistake of answering me with "k" because she just doesn't understand the "k" connotation. By all means, people, understand that your "k" speaks louder than actions and words. Remember, texting with bad connotations will not make for good conversation. 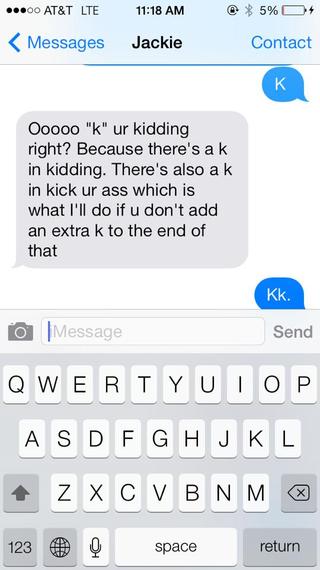 Wahoo, you have an iPhone with an updated emoji keyboard! Your life just became a million times more interesting, and at times, sexual. You can use emojis to share your emotions; hence EMOji, or you can use it to replace words. Excited about something? Insert salsa-dancing emoji here. Ready to go out with the girls? Insert margarita emoji here. Lolling so hard? Insert crying laughing emoji face here. Use a winky face if you're feeling frisky. But use caution with the winky face, as it may come off too strong with certain people. Translation: You're asking for the D. 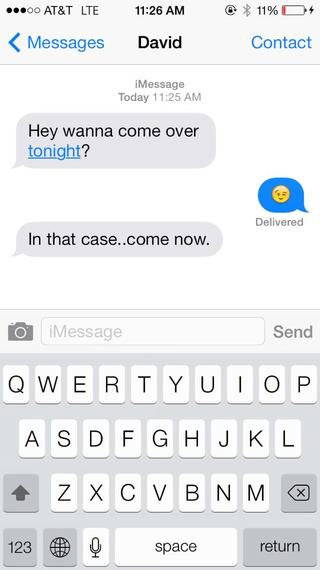 Like our friendly neighborhood friend Spiderman says, "with power comes great responsibility." Similarly, with a texting plan comes possible embarrassment. You have the responsibility to construct the most perfectly worded text if you follow the simple texting rules for optimum success. But, I urge you to click send with caution, as you may just triple text yourself into a booty call ;).

Amanda Hanowitz, Pretty Bird on a Breeze and blogging extraordinaire, enjoys the occasional shop in her mother's, father's and brother's closets. Why, you ask? The best vintage and menswear around. She is not daft, but rather witty and spunky. She writes for Unwritten and you can follow her on twitter @getWITZit.

The destination for millennials to share their uninhibited thoughts.