I'm a fan of new technology and was among the first on my block to buy a VCR. I've also been surfing the Internet for many years and bought a cell phone not long after plans became affordable.

So, I'm far from a Luddite and, while I can appreciate those who text and use the latest smartphones, hasn't it become so commonplace it has trumped common courtesy?

Using phone calls in restaurants can be annoying, but nowadays many people put phones on vibrators to avoid loud ringing or designer-theme music announcing a call. If one can chat at an audible level no louder than normal conversation, I don't view it as a disturbance. However, when one has to shout because reception is spotty, it's time to leave the table and continue the call in the lobby or outside the venue. 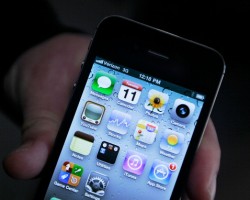 For the most part I've noticed people with cell phones have their ringers off in a theater. It's even more seldom when an inconsiderate person chats in his/her seat and very infrequent when someone actually dials a call.

But texting is another issue. Some people feel if they're not talking it's okay to have a flash of light appear out of nowhere in a darkened auditorium. And these louts do so mindlessly without concern for others, reading text or checking Facebook or Tweeting throughout the course of the film, play, ballet or opera they've presumably come to experience.

And it's incredible how many people will not reproach the wrongdoers. And when asked to stop, the reactions of these transgressors of decent conduct are often akin to a hostile "You talkin' to me?" rather than "I'm so terribly sorry." Many times the offender will immediately put the phone in his/her pocket or purse, only to pull it out later on. It's becoming increasingly rare for them to actually turn it off.

More often than not my stomach is in knots when I see an army of texters and surfers in the audience prior to the start of a film, wondering if they'll continue to do so during the movie. Some do and some don't, but it puts me in a defensive posture, almost like a self-appointed cinema policeman, because theater management does little to eliminate the practice.

At the recent COLCOA (City of Lights, City of Angels) French Film Festival at the Directors Guild theaters in Los Angeles, on almost every day I had to ask one or two people to turn off their phones. The gentleman next to me did so immediately and apologetically, but the young woman on his left only obliged when a lady behind me complained. And later on, the young woman pulled it from her purse and the flash of light resumed.

A couple of years ago at the same event, I was told to "relax" by a guy who was continuing to text after the event had started. Why am I the one apparently in the wrong? Why has it become more "cool" to be impolite?

Minutes before one of the screenings I approached Francois Truffart, the director and host of COLCOA, and asked him if he would please make an announcement admonishing people to turn off their phones and reference the annoying lights that emanated from them. He said he would do so, and just a few moments later, after welcoming the audience and introducing the filmmakers present, he left the stage failing to say anything about the annoying devices.

It's possible he forgot, but it struck me as a grievous oversight, as this was a festival to appreciate film and, except for one slide among the 27 appearing in a montage prior to each screening, at the films I attended there was no mention about this at all. Particularly mind boggling at this same screening, the woman seated next to me pulled out a flashlight to look at her program and took her time turning it off when I demanded she do so.

And it's not just COLCOA. At screenings of my own Writers Guild, which I frequent throughout the year, it's a given there will be those who text during a film. Again, the reactions to my demands are met with varying responses, from embarrassment to hostility.

And of course at regular movie theaters, even though there are slides on the screen or prerecorded announcements or even personally issued proscriptions by ArcLight hosts and hostesses, the texting goes on regularly.

So, the question is what can we do about it? Is there a way to stop it in the manner that cell phones are confiscated at certain screenings? Or some sort of technological blocking of signals? We are told the consumers will rebel, but what did they do when cell phones were not available and the best alternative was to leave the number of the movie theater for emergencies?

But more to the point, because I believe almost 100% of texting is social and not urgent, and therefore unnecessary, is there a way to make the practice so socially unforgivable that when a sparkle of light is emitted the audience will groan and boo or, better yet, an usher will escort the perpetrator from the theater?

And by bright lights I include those who open their cell phones to check the time repeatedly. If it's necessary, wear a watch. There is almost always enough illumination during a film to do so.

I urge journalists in print to write articles and broadcast anchors to air reports. CBS' 60 Minutes, ABC's Nightline or NBC's Dateline this is right up your alley. Anderson Cooper, you could qualify to become one of CNN's Heroes.

Modern technology makes life much easier, but in instances such as indicated above it's created an addictive mindset fostering rude behavior, and it's time for people to stop. Absent their doing so voluntarily, new systems should be employed to prevent them from ruining a theatrical experience for the rest of us.