It can be tempting to think that the time it takes to read or send a text while driving isn't all that long. In reality, though, doing so takes your eyes off the road for about 4.6 seconds, according to the National Highway Traffic Safety Administration (NHTSA). To put that in perspective, that's about how long it would take you to drive an entire football field, at 55 miles per hour, blind.

But even the drivers who don't text while moving may still be texting in the car. According to a new HuffPost/YouGov survey, more than half of smartphone users between the ages of 18 and 44 and 40 percent of smartphone users ages 45 to 64 have texted while stopped at a red light. 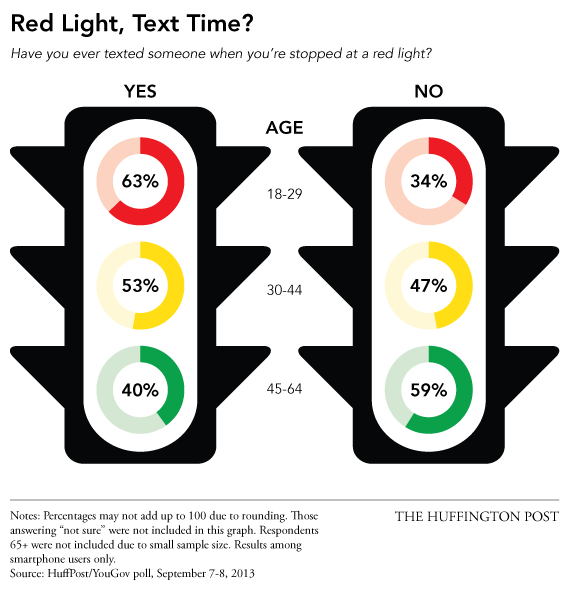 Among 18-29-year-old smartphone users, 63 percent said they have texted at a red light. More than 20 percent of distracted drivers age 15 to 19 involved in fatal crashes were distracted by cell phones, according to the NHTSA.

Thirty-two percent of U.S. adults, including non-smartphone owners, say they've texted while stopped at a red light. Stalling to text could lead to rear-end crashes, if other drivers notice the light turn green first.