BANGKOK (AP) - Thailand on Sunday marked the 83rd birthday of King Bhumibol Adulyadej, the world's longest-reigning monarch, but elaborate celebrations could not mask concern over his health and the future of the royal institution. (Scroll down for photos)

In his annual birthday speech, the king sounded what has become a routine, general call for unity and hard work to keep the country happy and prosperous in the face of the sometimes violent political conflict it has endured in recent years.

Thousands of flag-waving citizens cheered his car's journey to the ceremonial Grand Palace from Siriraj Hospital, where he was admitted in September 2009 with a lung inflammation. There has been no detailed explanation of his extended hospitalization. The king's health is a matter of immense public concern, both because he is widely admired and because he is regarded as a unifying figure in times of national crisis.

Shouts of "Long live the king" rang out as he entered the hospital lobby in a motorized wheelchair and headed to board a van, in which Queen Sirikit also sat.

On sidewalks close to the hospital, the crowd was five or six deep, with those immediately along the street kneeling reverentially. Police and soldiers lined the entire route for the 12-minute journey through Bangkok.

Massive ceremonies were held later in the day, as on past occasions honoring the king. They included a candle-lighting show of devotion led by the prime minister, fireworks, the release of thousands of small hot-air balloons and a nighttime boat procession on Bangkok's Chao Phraya river.

Speaking briefly in a slow and rasping voice to dignitaries at the Grand Palace, the king urged people to be clear about their duties and carry them out to the best of their ability.

He called for them to perform "justly and firmly, doing your duties correctly in an appropriate manner, for the security of the country and its benefit." The annual birthday speech has for several years been the main forum for the king to present his ideas directly to the public.

Bhumibol's near-disappearance from public life has coincided with a period of political instability after a 2006 military coup against Prime Minister Thaksin Shinawatra polarized the country. The king has been unable or unwilling to play his traditional mediating role to ease the conflict.

Defenders of the status quo, including the current government of Prime Minister Abhisit Vejjajiva, say the monarchy is under attack by radicals who wish to undermine its authority and prestige, or even abolish it. While serious opponents of the royal institution are a tiny minority -- and liable to long jail terms if they speak publicly -- the past few years have seen unprecedented questioning of the monarchy.

Traditionally, the palace managed to stay aloof from the parry and thrust of politics, its influence exercised behind the scenes or only in extreme cases where a crisis posed an immediate threat to the kingdom's peace and stability.

However, the 2006 coup ousting Thaksin opened a political and social schism that has still not healed. Thaksin had been popularly elected in landslide victories, but his critics accused him of corruption and disrespect to the crown.

His supporters say he was toppled at the behest of a Bangkok-oriented elite, with elements of the palace and the military playing key roles because they felt their power and influence were threatened by Thaksin's popularity, which was greatest among the country's poor rural majority that benefited from his populist policies.

The polarization became greater as gestures made by the king's top aides and even Queen Sirikit seemed to give a nod of approval to Thaksin's opponents, including "Yellow Shirt" protesters who in 2008 occupied the prime minister's office for three months and took over Bangkok's two airports for a week. Their protests were aimed at ousting two successive pro-Thaksin prime ministers.

As the crisis deepened, the health of the king began to decline, and he sharply curtailed his public appearances. That has intensified long-standing concern about the royal succession, though it is still not acceptable as a matter for public debate.

The heir apparent, Crown Prince Vajiralongkorn, does not yet have the stature or moral authority of his father, who has been on the throne for more than 64 years.

At Sunday's Grand Palace ceremony, the 58-year-old prince was the first of several dignitaries -- including the prime minister and the heads of Parliament and the military -- to offer birthday wishes to the king.

"On this occasion, I would like to promise that I will carry out my tasks appropriately according to my status and my duties, based on reason and rationality in order to maintain the Chakri Dynasty's honor and the prosperity and security of the country," the prince said. 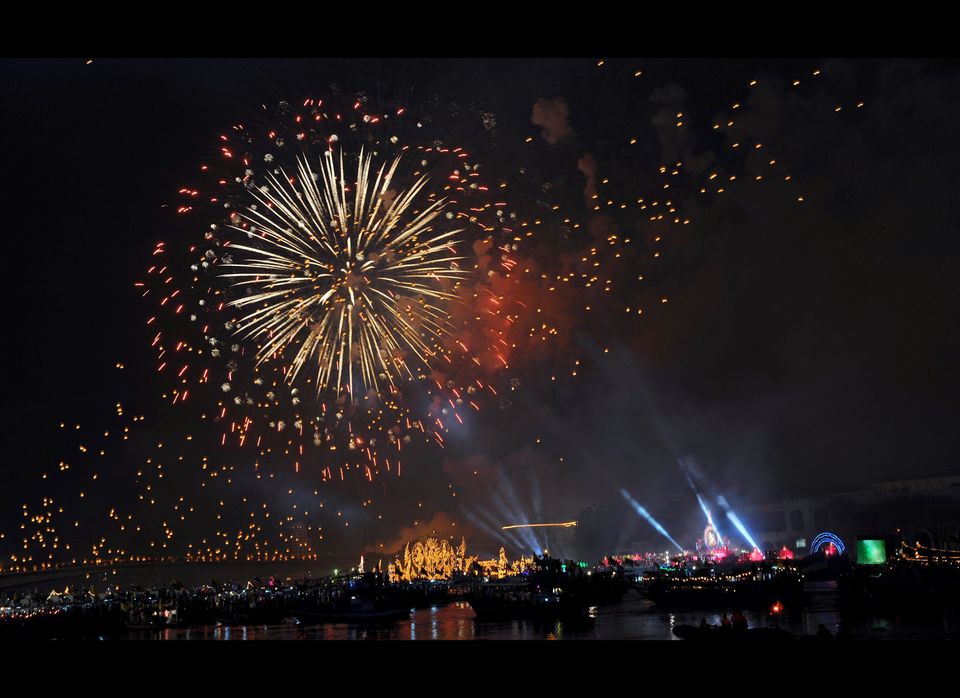 1 / 5
Fireworks explode over the Chaophraya river during the celebration.
Getty