* PM Yingluck able to get out of attacked police complex

BANGKOK, Dec 1 (Reuters) - About 30,000 protesters launched a "people's coup" on Thailand's government on Sunday, swarming state agencies in violent clashes, taking control of a state broadcaster and forcing the prime minister to flee a police compound.

But after a day of skirmishes between protesters hurling stones and petrol bombs against riot police firing back with teargas, the demonstrators failed to breach heavily barricaded Government House, office of Prime Minister Yingluck Shinawatra.

"They haven't seized a single place," National Security Council Chief Paradorn Pattanathabutr told Reuters. "They go to different places and they go back out."

The protesters sowed chaos in one of Southeast Asia's biggest cities, breaching a police line, seizing seven police trucks, and forcing Yingluck to move to an undisclosed location from a building where she had planned to give media interviews.

Small fires burned from petrol bombs that landed by police trucks. Protesters pulled at barbed-wire barricades as others washed teargas from their eyes with bottled water.

It is the latest dramatic turn in a conflict pitting Bangkok's urban middle class and royalist elite against the mostly poor, rural supporters of Yingluck and her billionaire brother, Thaksin Shinawatra, a former prime minister ousted in a 2006 military coup.

The deep detonation of stun grenades, followed by the jeers of protesters, echoed across the historic government quarter, not far from the Khao San Road tourist area, after a chaotic night of gun and knife battles in east Bangkok in which three people were killed and at least 58 wounded.

Police spokesman Piya Utayo said troops would forcibly dislodge protesters who have occupied a government complex since Thursday and the Finance Ministry since Monday.

The government urged people in Bangkok, a metropolis of 10 million, to stay indoors from 10 p.m. to 5 a.m.

"We ask people to not leave their homes for their safety so they will not become a victim of provocateurs," Deputy Prime Minister Pracha Promnok said in a televised address.

Earlier, Reuters journalists waiting to interview Yingluck in the police Narcotics Suppression Bureau were told by an aide she had left after protesters made it inside the outer compound of the Police Sports Club, where the bureau is located.

"Because of safety reasons we cannot disclose her location," Noppadom Pattama, Thaksin's lawyer, later told Reuters. Thaksin had urged the government to show restraint, he added. "The government must be the bigger person in this scenario."

Protesters massed in front of a police barricade outside Wat Benjamabhopit, also known as the Marble Temple. Police fired teargas as some tried to heave aside concrete barriers.

"I just want the people named Shinawatra to get on a plane and go somewhere - and please, don't come back," said Chatuporn Tirawongkusol, 33, whose family runs a Bangkok restaurant.

Outside the Metropolitan Police Bureau, about 3,000 protesters rallied, accusing riot-clad police of being manipulated by Thaksin, a former policeman who rose to become a telecommunications magnate before entering politics and winning back-to-back elections in 2001 and 2005.

The area around Government House was a scene of nearly non-stop skirmishes, as police fired teargas into a stone-throwing crowd chanting "Slaves! Slaves!" A Reuters photographer saw protesters hurl at least a dozen petrol bombs into police positions from Rajamangala University of Technology Phra Nakhorn across a canal from Government House.

There was a mixture of anger and anxiety among protesters occupying the university. Some wheeled garbage bins full of stones to hurl at police, while others worried about a late-night operation to clear the campus by force.

"It's not safe here," said Sumittra, 40, a government official who didn't want her full name used. "We don't know when they will attack us."

"We invite all Thais to join us and defend democracy," he said in a speech televised live on all almost every station, including state-owned Thai PBS which agreed to broadcast the speech after protesters surged into its compound.

Capping a week-long bid to topple Yingluck and end her family's more than decade-long influence over Thai politics, Suthep had urged supporters to seize government offices, television stations, police headquarters and the prime minister's offices in a "people's coup".

Suthep, a deputy prime minister in the previous Democrat-led government that Yingluck's party beat in a 2011 election, told supporters they had occupied 12 state agencies and brought a million people on the streets. Police said about 30,000 people joined the protest on Sunday, compared with 100,000 a week ago.

Yingluck, who become Thailand's first female prime minister, has called for talks with the protesters, saying the economy was at risk after demonstrators occupied the Finance Ministry on Monday. Suthep has ignored her.

The Democrats, Thailand's oldest political party, have not won an election in more than two decades and have lost every national vote for the past 13 years to Thaksin or his allies.

Thailand faces its worst political crisis since unrest in 2010, which ended with a military crackdown. In all, 91 people were killed then, mostly Thaksin's supporters trying to oust the then-Democrat government. Suthep faces murder charges for his alleged role in the ordering crackdown.

Thaksin, who won over poor rural and urban voters with populist policies, was convicted of graft in 2008. He dismisses the charges as politically motivated and remains in close touch with the government from his self-imposed exile, sometimes holding meetings with Yingluck's cabinet by webcam. (Additional reporting by Martin Petty, Panarat Thepgumpanat, Damir Sagolj, Andrew R.C. Marshall and Viparat Jantrapap; Writing by Jason Szep; Editing by Alan Raybould and Robert Birsel) 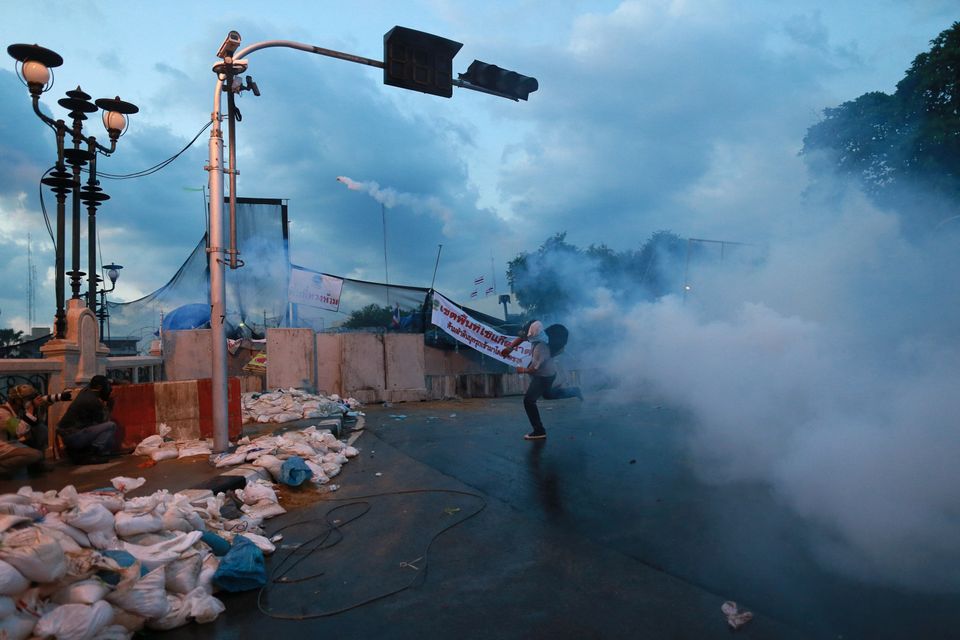