A Thai police gunboat prowls the waters of the Mekong River searching for the drug gangs that haunt this territory deep in the Golden Triangle, an age-old smuggling route -- with a new scourge.

At one time this frontier region, where the remote edges of Thailand, Myanmar and Laos meet, was awash with heroin, flooding over the border from the then world's biggest opium producer Myanmar.

Times have changed and now the drug of choice is methamphetamine often in the form of "yaba" -- Thai for "crazy medicine" -- bound for the streets and clubs of Asia.

"It is very difficult to prevent drug trafficking into Thailand," said general Manop Senakun, commander of police in Chiang Saen, the Thai town at the gateway to the Golden Triangle.

It is estimated that at least 1.4 billion yaba tablets -- with an estimated street value of $8.5 billion -- are being produced each year in the region.

The drug is mostly made in isolated mobile laboratories hidden in the forests of Shan State in Myanmar, which is still the second largest global source of opium after Afghanistan.

Police "tried every way" to stem the flow of narcotics, Manop said. But it was the notorious slaying of 13 Chinese sailors on the Mekong in 2011 that caused regional authorities to launch a concerted crackdown on trafficking.

China, from where the river snakes, has added its weight to the anti-trafficking efforts.

An operation dubbed "Mekong Safe" -- led by Beijing with the involvement of its Golden Triangle neighbours -- between late April and late June led to the arrest of 2,534 suspects and the seizure of almost 10 tons of drugs, according to Thai authorities.

China executed Myanmar drug lord Naw Kham for the sailor killings. The two boats involved, found with some 900,000 methamphetamine tablets on board and riddled with bullet holes, have been left to rust in Chiang Saen port.

"The frequent occurrence of drug-related crimes on the Mekong River has been effectively contained," said the Chinese Embassy in Myanmar in June.

A dedicated Thai unit of 30 policemen, with three boats, now patrols a 17-kilometre (11 mile) stretch of the river border.

But far from being deterred, as the crackdown starts to take effect on the river heavily-armed traffickers are finding alternative routes, with some choosing to trek with their valuable contraband through the jungle from Myanmar.

"(Traffickers) walk in a caravan with 20 to 30 people," Manop told AFP. "They would have a lot of weapons with them."

Clashes with the army or the police are common. In one incident in 2012, eight suspected traffickers were killed by security forces and Manop predicts things will only get "more violent".

Pierre-Arnaud Chouvy, a geographer at France's CNRS national research centre, said he was "not convinced by the efficacy" of the river crackdown.

"We have a few cases of very high-profile seizures, but no real evaluation of how effective these patrols have been," Chouvy said, adding that networks tend to be small in scale and "flexible", so hard to track.

Corruption within the very forces meant to catch the smugglers is also a challenge in Thailand, according to the most recent US Department of State report on drugs.

Paradorn Pattanatabut, head of the National Security Council, which supervises the fight against trafficking in Thailand, said there was some truth in these claims, but vowed "severe punishments" for those found to be involved.

The drug problem is showing no signs of receding.

While production of opium is a fraction of its height in the 1970s and 1980s, Myanmar's cultivation of the drug has increased in recent years, to some 690 tonnes in 2012 -- over 10 percent of the global total.

Tun Nay Soe of the United Nations Office on Drugs and Crime (UNODC) in Bangkok, said the level of production of both meth and opium were at "alarming levels" in the Golden Triangle area.

"I would say it is pretty much still at the epicentre of drug trafficking and production in the region," he added.

The consequences are desperate -- and close to home.

In Thailand alone, the UNODC estimated there are some 48,000 heroin addicts and around 600,000 yaba users.

"Despite all the (drug) suppression, it continues to be widespread," said 53-year-old social worker Nisanart Trirat in Klongtoey, Bangkok's largest slum.

She said the narcotics problems "never decreased" in all her years working with addicts in the area.

Joon has tried almost everything -- glue, valium, marijuana, yaba, ice, heroin -- since he started abusing substances at 10 or 11 years old. As have many of his neighbours in Bangkok.

"When I walk in the slum areas, there will be some kids asking 'brother, what do you want?'," he said.

Joon has been clean since his recent release from prison for killing a man in a fight, the 35-year-old AIDS sufferer told AFP after receiving treatment at his local methadone centre.

"I want to make my mom feel good. It's my last chance -- nowadays I am waiting for death," he said, before strolling away with a friend, who appeared to be in the process of sniffing glue. 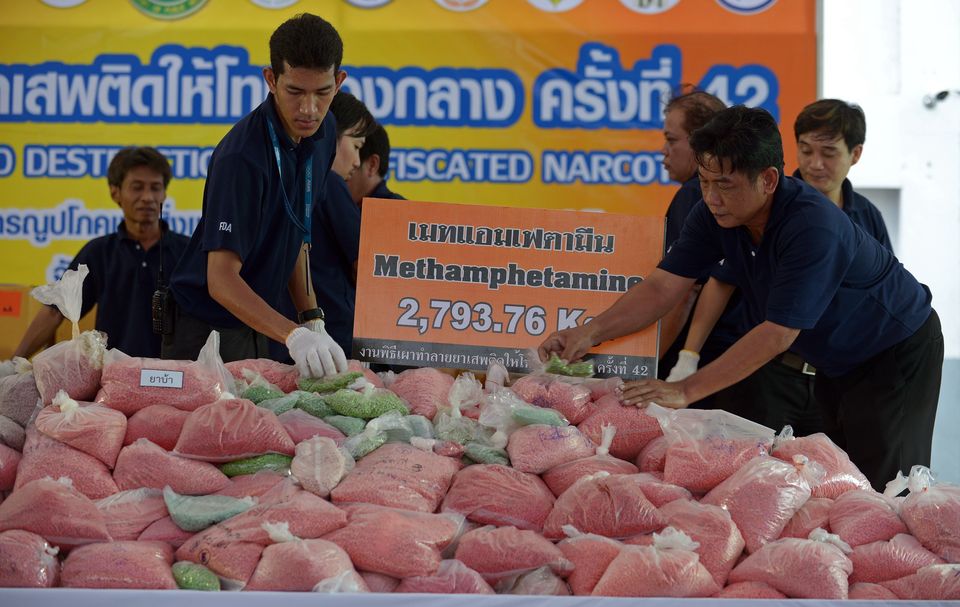 1 / 8
Thai officials check packs of confiscated narcotics before destroying them marking the UN's International Day Against Drug Abuse and Illicit Trafficking in Ayutthaya province on June 26, 2013. More than 3363 kilograms of confiscated narcotics including methaphetamine, heroin, opium, cocaine and psychotropic substances with an estimated value of 10 billion bahts (324 million USD) were to be burnt. (PORNCHAI KITTIWONGSAKUL/AFP/Getty Images)
Getty Images