LOS ANGELES (AP) — For the first time, they gobbled up treats, walked on grass and rolled in the dirt — things many American dogs take for granted.

Betsy Garvin's three dogs were rescued from Thailand, where they had been caged their entire lives and where many dogs roam the streets or are raised as food for other Asian countries. The trio of mutts, ages 2 to 9, left an outdoor Thai facility where dogs are crammed together in filthy cages and 40 hours later, glimpsed freedom in Southern California.

In their new home, Gigi and Mimi cautiously emerged from an airplane crate and glanced around, while the male pooch, Singha, bounded out. He padded across a rug, a sensation he had never felt, and then took a big whiff of the earth outside.

"It's like he was saying: 'Like, wow, I'm home.' I let them have some freedom, go to the bathroom and get fresh air," said Garvin, who lives in Agoura Hills, about 35 miles northwest of Los Angeles.

LIFE Animal Rescue in the California city has placed 50 Thai dogs in the last two years, including Garvin's, said founder Emily Bernie. She partnered with Cindy Amey, who lived in Thailand for five years and set up a network of rescues, veterinarians and shippers.

They aren't the only ones working to save dogs bound for a serving dish, even though the taste for dog meat is fading overseas. In March, Humane Society International and the Change for Animals Foundation teamed up to bring nearly 60 dogs from a South Korean meat farm to Northern California to be adopted. The farmer agreed to close the business and raise produce instead. In January, more than 20 dogs were saved from a Seoul dog meat farm and sent to Washington, D.C., to start new lives.

In adopting a dog that hasn't had the advantages many Western dogs enjoy — toys, treats and attention — Garvin didn't know what to expect. She wondered about simple things, such as how they would act in her backyard.

"I didn't know if I should let them have that much space immediately," she said. But "they came out extremely relaxed and appreciative. It was a joy to watch."

Six weeks after their arrival, Gigi and Mimi are getting more comfortable but stick close to Garvin's side, while Sangha is still awe-struck.

"He was really impressed with the grass and likes to smell the dirt and cement," she said.

Thai dogs are rescued from often appalling conditions, says Amey, who has moved to Australia and helps save animals through her group, K9Aid International.

Meat merchants round up abandoned or stray dogs, pack them together in tiny cages and stack them on trucks to be sold as food. Other dogs taken off the street are sent to deplorable-looking shelters, where several are squeezed into filthy cages and given little food and no medical care, Amey said. Dogs die of disease or fights in the massive outdoor enclaves, where adoptions are rare and euthanasia nonexistent, she said.

Bernie's group in California faces criticism for rescuing dogs abroad when there are animals at home that need help.

The 24-year-old LIFE Animal Rescue has placed over 6,000 dogs locally, but shelter conditions in the U.S. have changed drastically in the last quarter-century, she said. Many have moved away from euthanasia.

"The dogs do not know borders," Bernie said. "If the dogs need help, I don't care where they are located."

The efforts have meant a happy ending for Garvin and her three adopted pooches.

The pets have gotten used to the daily schedule at their new home: two meals, three walks, playtime, watching TV upstairs and then bedtime.

"It's amazing how they have adapted," Garvin said.

PHOTO GALLERY
The Rescued Dogs, Before And After

Caged Dogs Rescued From Thailand Find Happy Homes In The U.S.
The Rescued Dogs, Before And After 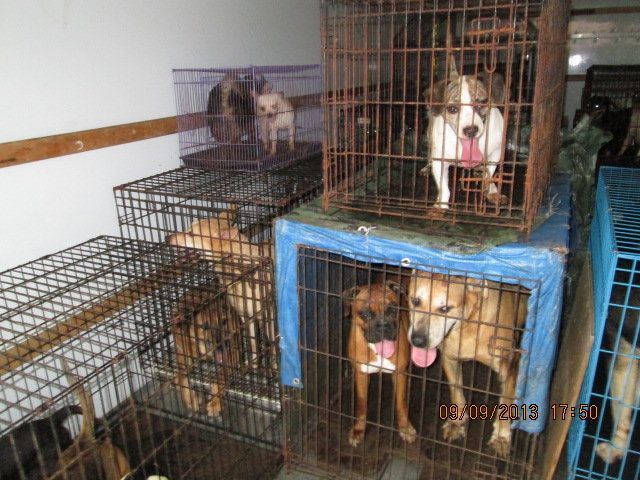