HUA HIN, Thailand (Reuters) - A series of blasts hit three of the most popular tourist resorts as well as towns in southern Thailand on Thursday and Friday, killing four people and wounding dozens. The bombings come days after the country voted to accept a military-backed charter in a referendum.

Four bombs exploded in the upscale resort of Hua Hin, about 200 km (125 miles) south of Bangkok on Thursday evening and Friday morning, killing two people and wounding at least 24.

Other blasts hit the tourist island of Phuket, a resort town in Phang Nga province, and Surat Thani, a city that is the gateway to islands such as Koh Samui in Thailand’s Gulf.

Hua Hin is home to the Klai Kangwon royal palace, which translates as “Far from Worries Palace”, where King Bhumibol Adulayadej, the world’s longest reigning monarch, and his wife, Queen Sirikit, have often stayed in recent years, until both were hospitalized.

Friday was a public holiday in Thailand to mark the queen’s birthday, which is celebrated as Mother’s Day.

No group has claimed responsibility, though suspicion could fall on groups fighting an insurgency in Muslim-majority provinces in southern Thailand.

Police had intelligence an attack was imminent, but had no precise information on location or timing, national police chief Chakthip Chaijinda told reporters in Bangkok on Friday.

“We just didn’t know which day something would happen,” he said.

Since Sunday’s referendum on the constitution, there have been attacks in seven provinces using improvised explosive devices and firebombs, Chakthip said.

The devices were similar to those used by separatist insurgents in southern Thailand, but that did not conclusively show they were the perpetrators, he said.

Police ruled out any links to international terrorism, as did Thailand’s Foreign Ministry, which said in a statement on Friday: “The incident is not linked to terrorism but is an act of stirring up public disturbance.”

Thai authorities beefed up security at tourism spots, airports and on public transport in Bangkok, while Thai junta chief and Prime Minister Prayuth Chan-ocha expressed frustration about the motives for the attacks.

The attacks are bad news for Thailand’s tourist sector, which has been one of the few bright spots in a sluggish economy.

Tourism accounts for about 10 percent of gross domestic product and Thailand was expecting a record 32 million visitors this year.

Australia issued a travel advisory saying Australians should “exercise a high degree of caution” and warned: “Further explosions in any part of Thailand are possible.”

Two blasts on Friday morning in Hua Hin came after twin explosions on Thursday. One of those was near a bar in a narrow alley in the town late on Thursday, killing one Thai woman and wounding 21 people, Krisana said.

Ten of those injured in the Hua Hin blasts were foreigners, Krisana said, and eight of them were women.

The two explosions in Hua Hin late on Thursday were detonated by a mobile device, police said. The first took place 20 minutes earlier and about 50 meters from the second, but injured nobody.

Such twin blasts are common in the three Muslim-majority southernmost provinces of Thailand, where a long-running insurgency intensified in 2004, with more than 6,500 people killed since then.

The three provinces near the border with Muslim-majority Malaysia soundly rejected the referendum on the new military-backed constitution, which passed convincingly in most of the rest of the country in Sunday’s vote.

Violence has occasionally spilled over to areas outside the three provinces, which were part of a Malay sultanate until it was annexed by Buddhist-majority Thailand a century ago.

Hua Hin, Phuket and Phang Nga are far from the usual conflict zone, where attacks are typically aimed at the security forces and government representatives, not tourists.

In a separate incident on Friday, media reported two bombs had exploded in the southern province of Surat Thani, killing one person and wounding five. That came after a blast in Trang, also in the south, on Thursday, in which one person died and six were wounded.

No one was killed or seriously wounded on Friday in two blasts in the beach town of Patong on Phuket island or the two explosions in the beach province of Phang Nga. Authorities also defused two explosive devices in Phuket on Wednesday, police said.

The head of Interpol in Thailand, Police Major General Apichat Suriboonya, told Reuters it appears the bombs were meant more to send a message rather than cause death and destruction. “But the thing is, if you observe the bombs, they are not targeted to kill people but to send a message to some groups. It could be a domestic issue.”

Small bombs have been used frequently for attacks during periods of unrest over the past decade of political turmoil but have been rare since the military seized power in a 2014 coup in Thailand.

The latest bombings came almost a year after an attack on a Hindu shrine, crowded with tourists in central Bangkok, killed 20 people and wounded more than 120. Police have accused two ethnic Uighur Muslims from China for the Aug. 17, 2015, attack. 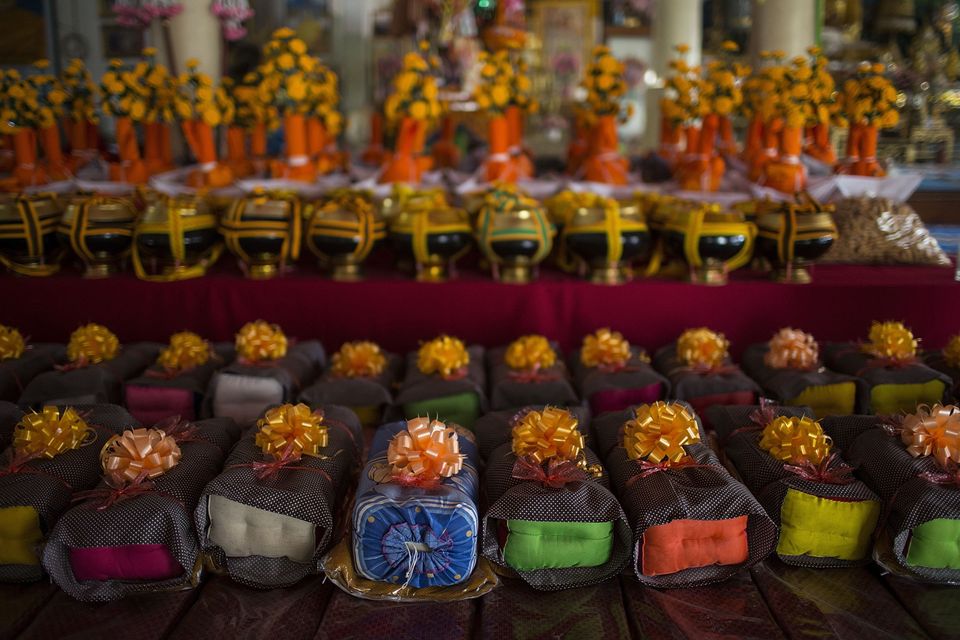 1 / 16
Robes and cushions for novices are laid out at Wat Supan Rangsri in Mae Sariang, Thailand, on April 5.
Taylor Weidman via Getty Images