From Bangkok to Phuket, Thailand is a country filled with abandoned pets. Dogs of all sizes, shapes and descriptions roam the streets, alleys and beaches in search of food and shelter. Some form packs, others hunt solo looking for a handout or a misplaced scrap of food. Many of these dogs, especially the packs, will claim a street or stretch of sand as their turf that they will defend with their lives. 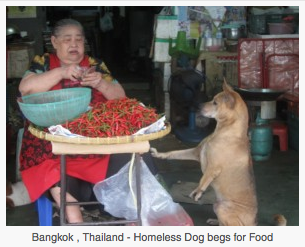 Often sickly or covered with sores and fleas, these dogs are an ever-worsening problem. Several country-wide surveys have been administered to determine what tourists like best and least about their visit to Thailand. Stray dogs begging for food and being a general nuisance was the number one complaint, according to those surveyed.

One small group of dedicated animal lovers has been charged with the seemingly impossible task of caring for all of Thailand's unwanted pets. Thailand's SPCA, headed by Roger Lohanan and his five full time staff members, labors tirelessly seven days a week to help the four-legged orphans who roam the streets of Bangkok.

"We have a very serious problem with our abandoned pets in Thailand," said Lohanan. "More than 68,000 puppies alone are born annually on the streets of Thailand. In 1999, the municipal government killed more than 50,000 stray dogs. These dogs are put to death in a terrible manner. The authorities prefer to poison the dogs they capture because it is cheaper and takes less time than putting the animals down in a more humane manner. Sometimes they will even neglect to feed captive strays in hopes that the animals will starve to death before they are scheduled to die by poison."

The reason for Thailand's pet problem is simple: Pet owners simply fail to spay and neuter their animals. Owners frequently abandon their dogs once the pets are no longer fun to play with or become too expensive to take care of. These strays wind up meeting other strays and have more puppies. The goal of Thailand's SPCA is to save the country's animals through educational programs that are designed for both children and adults.

"We go to schools with our Animal Friendly Project in an attempt to teach our children why it's so important to be a responsible pet owner," Lohanan explained. "Our primary goal is to make people understand why it is important to get their animals spayed and neutered. We also have campaigns to promote awareness to various acts of animal cruelty like dog eating, cock fights, dog fights and keeping elephants in the city."

The education of an entire nation will take time, and time is something that many of Thailand's abandoned animals don't have. Every day hundreds of dogs lie sick or injured in Bangkok's streets and alleys, whimpering for help that seldom comes. In an effort to aid as many dogs and cats as possible, Lohanan and his team spend their weekends traversing specific sections of city in search of injured pets who need immediate medical attention.

"We do the best we can with our limited funds," explained Lohanan. "We do not have the money to buy equipment and to hire a permanent vet and staff, so we depend greatly upon donations and individuals who wish to help just because they care about Thailand's abandoned animals."

The government doesn't give the SPCA any financial support: the organization depends entirely upon public donations and fundraisers to keep its doors open.

"There is a very kind woman who donates a two-story space that we use as our Emergency Center and as a temporary shelter to injured animals," Lohanan explained. "And the RSPCA in England gave us some medical supplies and a vehicle that we use for our spaying and neutering program. We work out of a donated office and sit on borrowed furniture. As you can tell, we desperately need help to care for our country's abandoned pets."

On the island of Samui, Thailand's pets face a similar problem. Out of the reach of Bangkok's SPCA, another group of dedicated men and women have taken the responsibility of doing their best to aid the local pet population.

Samui's Dog Rescue Center faces a similar situation as the SPCA does in the big city. However, on Samui many of the hotels pitch in to help, which is something that doesn't occur in Bangkok.

"We are deeply concerned about the dogs on the island," said Watcharin Intarayotha, Rooms Division Manager of the Samui Palm Beach Resort. "The Palm Beach Resort is one of several hotels that contributes to the Dog Rescue Center in an effort to keep the stray dogs as healthy as possible. No one wants to see these animals come to harm, but we also do not want them to become an annoyance or health problem. So we do what we can to support any efforts to keep these dogs healthy here on Samui."

In Pattaya City, which is about a three-hour drive from Bangkok, is the World Dogs Center. This unique tourist location is a state-of-the-art animal training and show facility. The creators of the center are avid pet lovers. After years of adopting every stray dog and cat that they came across, Sumet Rungsanpitoon and Suttiwan Kaulkaw decided to open up the world's largest dog center. Their goal was to find a way to entertain and inform the public about the history of dogs and their role in society.

"We have more than 250 dogs here at the Center," explained Thanatip Thininoraseth, Public Relations Director and show emcee. "These dogs come from all over the world, many of them are animals that we have rescued."

These handsome hounds come in a variety of shapes, sizes and personalities. They live together in a spacious compound and each one has his own custom-designed doghouse. They are cared for and trained by a staff of devoted animal lovers, including two top Filipino animal trainers, Nancy and Ric Porcalla.

"We have been working at the World Dogs Center for more than a year," said Ric. "Our show is a specialty act that combines comedy and magic. One of the highlights to our performance is when my little dog does a traditional dance of the Philippines. It involves jumping between bamboo poles as they are slapped together in beat with the music."

"Our primary goal is to educate our visitors about dogs," said Thanatip. "Many of them have never seen a dog show and are amazed at how intelligent the animal is. While they are being entertained, we also stress how important it is to spay and neuter cats and dogs. It is very gratifying to see them crowd around our dogs for photos and to ask questions at the end of each show. For us it is most important that they leave here with an understanding about how much love a dog can bring to a person's life."

Thailand is filled with abandoned pets, but it is also a country that has many devoted pet owners who take wonderful care of their animals. Thanks to the people at the TSPCA, Samui Dog Rescue, Scad and The World Dogs Center, a grassroots effort is beginning to take shape to help these abandoned animals.