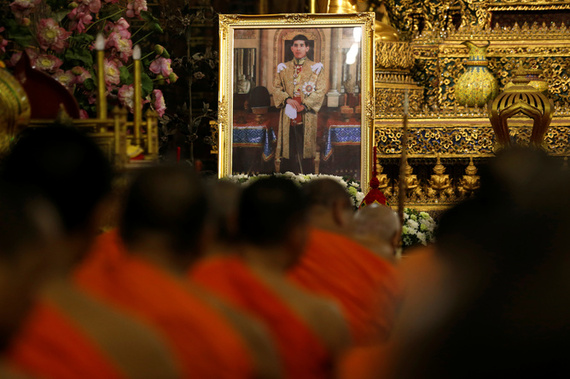 Buddhist monks pray in front of a picture of Thailand's new king at Wat Pho temple in Bangkok on December 1. Jorge Silva/Reuters

Patrick Jory, The University of Queensland

Thailand's crown prince has become King Maha Vajiralongkorn Bodindradebayavarangkun or Rama X, the tenth monarch of the Chakri dynasty, succeeding his father who died on October 13. But great uncertainly remains about Thailand's future - and that of the monarchy - both within the country and among international observers.

Much attention has focused on the personality of the unpopular Crown Prince. While the international media has noted his erratic personal life, of much greater concern is his reputation for ruthlessness, which could harm the overwhelming respect for the monarchy in Thailand.

Despite the superficial appearance of a modern constitutional monarchy (carefully crafted by palace propaganda), Thailand's monarchy is, in reality, deeply conservative. Can it modernise itself after the death of King Bhumibol Adulyadej and survive a changing world?

Thai royalists like to claim that no other country can be compared to Thailand. But there are at least three comparable cases in Asia's recent history that may shed light on Thailand's possible political future.

The first is China, following the death of Mao Zedong in 1976. The last decade of Mao's premiership in China - like the last ten years of King Bhumibol's reign in Thailand - was a period of great political turmoil.

Although ideologically from opposite ends of the political spectrum, both leaders played crucial roles in establishing the regimes that came to dominate their country: the Communist Party of China and the military-bureaucracy-monarchy power bloc in Thailand.

Both figures were the subject of totalitarian personality cults spread by the mass media and the education system. Both were politically untouchable.

In both countries, conformity to the idiosyncratic ideas of the ruler took the place of rational political debate. In both cases, ideologically extreme groups took advantage of the power vacuum created by the ageing and weakening of the ruler to seize power, ostensibly to protect his legacy: the "Gang of Four" and the Red Guards in China, and in Thailand, hyper-royalist street movements and an arch-royalist clique within the military.

Yet shortly after Mao's death in 1976 the Gang of Four were swiftly overthrown and Deng Xiaoping manoeuvred his own rise to power. As Deng consolidated his authority, Mao's supporters within the CCP were eventually sidelined.

Deng brought an end to the turmoil of the Cultural Revolution, strengthened relations with the West, and began the process of reforming China's economy and opening the country up to the world.

Another comparison is with Thailand's regional neighbour, Indonesia. The two countries share many similarities. Both King Bhumibol and the former military dictator General Suharto came to power during the acutely polarised politics of the Cold War in Southeast Asia. And military dictatorships were established in both countries.

King Bhumibol and Suharto were fervent anti-communists and played key roles in the suppression of communism. Both cultivated close relations with the United States, which supported their regimes financially, militarily, and diplomatically. And both were crucial to the adoption of policies of economic liberalisation and the capitalist transformation of their countries.

Suharto, who increasingly acted in the manner of a Javanese sultan, styled himself the "father of development", while King Bhumibol was lauded in North Korean-style state propaganda as the "development king".

When Bhumibol came to the throne in 1946 the finances of the Thai royal family were in dire straits. Today, Thailand's monarchy is the the wealthiest in the world, surpassing the Arab oil monarchs and the United Kingdom's Queen Elizabeth II.

But following Suharto's resignation in May 1998, amid the economic disaster of the Asian Financial Crisis, the New Order military dictatorship collapsed. Indonesia went through a process of rapid and far-reaching political reform that transformed the country. For all its problems, Indonesia today is perhaps Southeast Asia's most democratic nation.

But the chairman of a communist party and the president of a newly formed nation are modern political offices. The Thai king, by contrast, is conceived of, on the one hand, as the descendant of an ancient caste of warrior-kings, and on the other as a future Buddha. The military and religious legacy of the Thai institution of monarchy dates back to the 13th century.

While Mao and Suharto are gone, the Chinese Communist Party and the Indonesian presidency remain. Yet, it is by no means certain that Thailand's monarchy can survive King Bhumibol's passing in the same way.

The Shah of Iran

The third comparison is Iran after the Shah. At first glance, Buddhist Thailand might not appear to bear comparison with Islamic Iran, yet there are, in fact, startling similarities.

Both countries had old monarchies which, unlike many in Asia, survived the colonial era unscathed. The kingdoms they ruled, though formally independent, were dominated by the European imperial powers - especially the British Empire. In the aftermath of World War II, the monarchy in each country was weak, parliamentary democracies were evolving, and the political forces of the Left were on the rise.

The Cold War changed everything. With US assistance, reactionary forces in each country crushed the emerging democratic regimes - famously in the case of Iran with the assistance of a CIA and Mi6-sponsored coup that overthrew the democratically-elected Prime Minister, Mohammed Mossadegh, and restored the autocratic Shah.

Iran and Thailand became key US allies in the struggle against communism in the Middle East and Southeast Asia respectively. The US bolstered the authority of these monarchies as symbols of conservative stability.

In both countries networks of surveillance and repression were set up to eliminate threats to the regime.

With democratic and leftist forces murdered, imprisoned, or in hiding, and farmers' organisations, unions, and political parties banned or co-opted by the state, the two monarchs threw their authority behind policies of rapid economic development that transformed and polarised their societies.

Shah Reza Pahlavi was overthrown in a massive revolution in 1978-9 that ended the two-and-a-half millennia-old Iranian monarchy and established the Islamic Republic of Iran.

Despite the victory of communist forces in Indochina and a home-grown Thai communist insurgency, Thailand's King Bhumibol and its monarchy survived - until now.

In all three Asian countries the passing of authoritarian rulers - Mao, Suharto, and Shah Reza Pahlavi - was followed by sweeping political and social change.

Thai society has been acutely polarised for a decade. The long duration of the conflict may encourage the perception that the country will just muddle through the succession, and that some political compromise will eventually be reached - as had been the case during previous periods of political turmoil during the late king's reign.

But if the dramatic experiences of the three Asian countries discussed here following the passing of their powerful rulers provide any example, it would be short-sighted not to consider that a more far-reaching transformation than a royal succession might not also be in store for the Kingdom of Thailand.