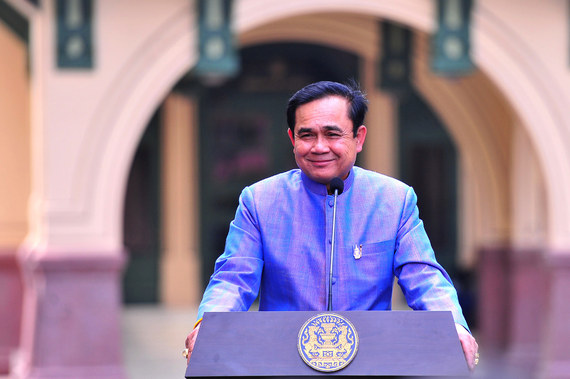 Surprising news coming out of South East Asia - a contentious draft constitution written by the Thai junta as part of its 'roadmap to democracy,' was abruptly rejected by a military council on Sunday, throwing Bangkok deeper into uncertainty. While the document has been widely criticized for making the military the most influential actor on Thailand's political scene, few had any doubts that the Charter drafted by members handpicked by the military would not muster the support of the National Reform Council (NRC), itself another military appointed body. Although some might say that the military has shot itself in the foot or has cut off the nose to spite the face by tabling the draft, in reality the rejection will only help the Thai junta stay in power.

While the members of the NRC refused to comment on what led to the rejection of the draft constitution, a new 6-4-6-4 timeline given by Deputy Prime Minister Wissanu Krea-ngam confirms that the military has de facto extended its rule at least until May 2017 - the junta has postponed democratic elections three times already, away from the original date of October 2015. According to the timeline, for the next six months a new drafting panel will be in charge of writing a new constitution, which will then be put up for public debate for four months pending the organization of a nationwide referendum. If approved, the next six months will see another committee write supplementary or 'organic laws,' while the last four months would be earmarked for the preparation of the general election.

Since the military coup in 2014, Prime Minister Prayuth has reigned over Thailand with an iron fist, thanks to article 44 of the interim constitution. The article states that Prayuth can "issue any order or direct any action to be done or not to be done, irrespective of whether the order or action would produce legislative, executive or judicial effect. Those orders or actions, as well as their observance, shall be deemed lawful, constitutional and final." Called the 'dictator law,' article 44 grants the junta absolute power over the three branches of government - which subsequently grants it absolute power over all internal affairs in Thailand.

The Erawan Shrine bombings will give more grist to the mill of the military to increase its hold over Thai society. The Diplomat's Shawn W. Crispin published an excellent analysis of the August 17th blast, concluding that, "the lethal explosion was more likely an act of local commission, motivated by rising tensions between rival political and security force factions jockeying for position ahead of a high-stakes royal succession." What this means is that the interim government under Prayuth is likely to further crack down on dissenting opinions and political opponents. In this context, allowing the Thai junta to stay in power until 2017, and potentially beyond, would be nothing short of a humanitarian tragedy.

Prayuth's government is an epitome of the adage "if your only tool is a hammer, then every problem looks like a nail." Any obstacle or incident within Thailand is met with significant military or police action, with dire consequences for all who decry the regime. In addition to the wide freedoms granted by Article 44, Prayuth heads the National Council for Peace and Order (NCPO), which has declared itself immune from any form of investigation. The organization is a double-edged sword as it grants the military unchecked powers over a vast scope of societal issues while at the same time making the junta directly responsible for the great number of human rights transgressions taking place in the country. Great power does come with great responsibility after all.

Indeed, there is an endless list of human rights indiscretions that have either been ignored, or even perpetrated by the Thai authorities.

In 2015 more than 100 individuals, including police and army officials, were charged with assisting in a human trafficking scheme, following the discovery and exhumation of a mass grave of 36 bodies near the Thai-Malay border. Moreover, there are innumerable accounts of rape and violations of young girls throughout the region at the hands of soldiers.

The US Department of State Trafficking in Persons Report of 2015 highlighted the perils facing both migrants and vulnerable workers within Thailand. The report focused on the fisheries industry in particular, but also delved into the world of sex trafficking and forced labor, both from vulnerable Thai nationals and the influx of migrants from neighboring Burma and nearby Bangladesh that Thailand has allowed to grow over the past two years. In June, Major General Manas Khongpaen was arrested on charges of running a people trafficking ring. Thailand was soon degraded to a Tier 3 status by the US report on Human Trafficking.

It's not just government voices that have spoken out against the Thai junta. Multiple human rights organizations have criticized Thailand's human rights abuses: Human Rights Watch cites a 'human rights crisis;' Amnesty International claims that the government crackdowns are creating a 'spiral into silence.'

As such, it is imperative that the US and the European Union start to exercise what power they hold over Thailand to pressure the government into implementing basic human rights protections and accelerate the transition to democratic rule. The current 6-4-6-4 timeline provides the perfect window for international actors to make their opposition to the junta's plans heard.

The US and the EU have an obligation to insist upon the enforcing and upholding of human rights standards in Thailand. As mandated by the TIP report, Washington has to apply trade sanctions on Bangkok, unless the automated mechanism is overridden by the White House. The EU has in excess of $30 billion worth of bi-lateral trade annually with Thailand, giving the Union significant leverage over the interim government, especially since the country's economy is cratering. Since the overthrow of the previous government, Thailand's economy has lost steam and relies entirely on tourism to keep afloat.

It is time for the West to start looking more closely at taking a more active stance in the East. While the EU worries about European illegal immigration and refugees, and the US frets about its military commitments, neither must forget the simmering crises further across the globe. Asia - and Thailand - may not be on the doorstep, but the people in crisis there deserve as much help as those closer to home.