My idea of a good workout is a nice long walk, and my dog thinks that is even a bit too strenuous.

It seemed we were both going to push past our natural laziness on a recent evening, when we turned up at a park in Northern Virginia for an hour-long class that combines fitness for people and dogs, and a dollop of obedience training. 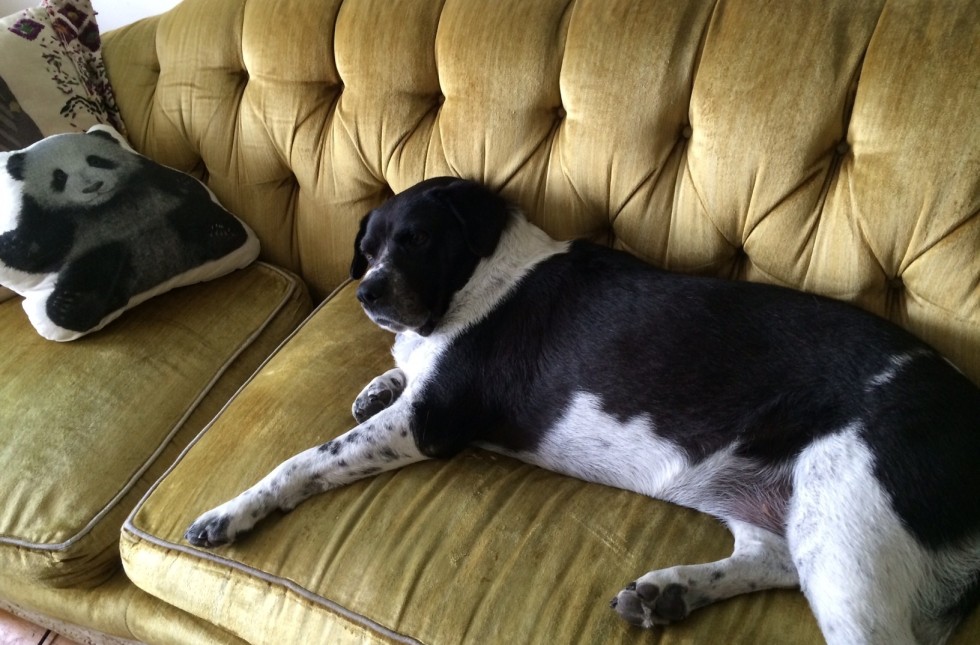 Murray's favorite form of physical activity is lifting his head up off of the couch to see if the cats are doing something naughty. He is an obedience school dropout

Karen Krieg spent a decade working in politics. Deciding she "wanted to help people," she says, she moved onto being a fitness trainer for humans and then an obedience trainer for dogs -- then realized that she could pull the best elements of both fields together, into an efficient hour-long session.

"D.C. is a place where everyone is busy," Krieg explains.

She began running Thank Dog! Bootcamps about two years ago. (Thank Dog! is a California-based company with licensed outposts in a smattering of other places around the country.)

"Finding a way to combine my dogs into the things that I love to do, running and working out just seemed like a natural thing to do," she says.

Krieg estimates that about 40 people have participated in her classes so far -- largely regulars of varying fitness levels, with canines ranging in size from petite Chihuahuas to massive Bernese mountain dogs, some already-well-trained and some not -- who do the workout a couple of times per week.

"It's always surprising it isn't more widespread, the concept is fantastic and fun," she says. "I am hoping to grow the program throughout the D.C. area." (The challenge on that front is finding more local parks where space is available for this sort of endeavor.) 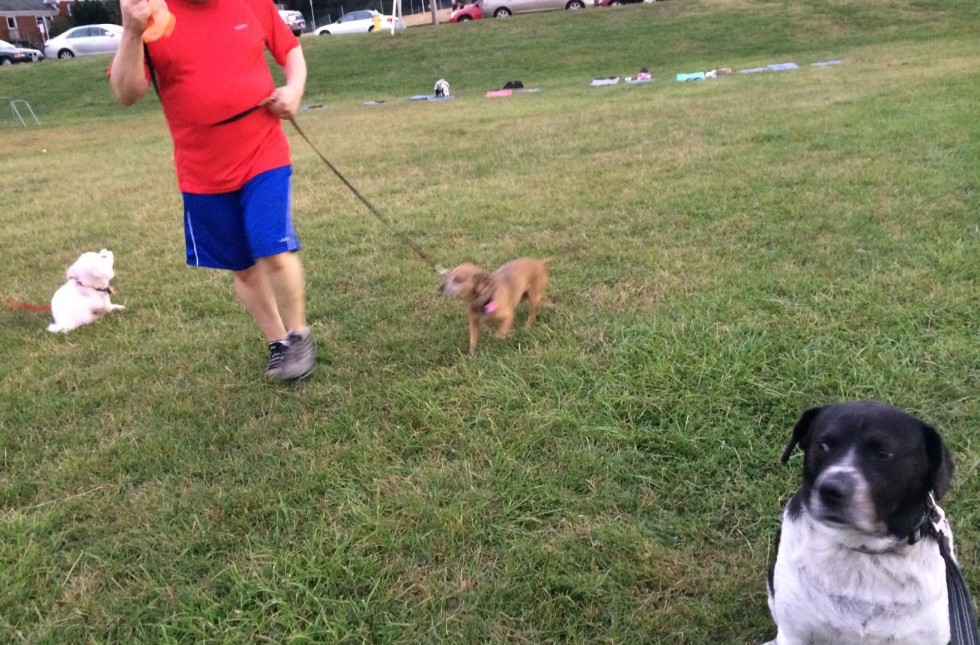 Some dogs are skeptical

The execution, we are happy to say, is also fantastic and fun.

Our class had about a half-dozen people in it, and a slightly larger dog population, since Krieg brought her three rescue pit bulls -- Rosie, Batman and Sasha -- along.

The setup involves yoga mats spaced a few feet apart, and adjacent temporary hitches for the dogs to be tied to during mat sessions. The workout itself is maybe what you would expect, if you have previously given some thought to what it would be like to do a fitness bootcamp with your dog. 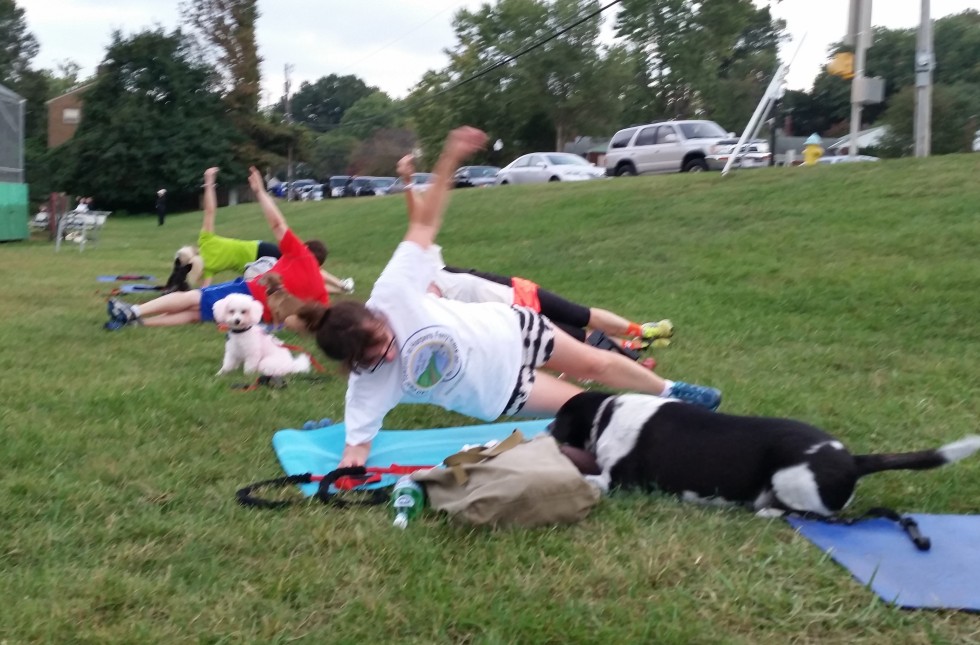 There's calisthenics and strength exercises like jogging, lunges, squats, crunches, and a leg lift routine called "pee on the tree," which is the most dog-like exercise the humans themselves are asked to engage in.

Dogs are tethered during the mat routines, then come along for the aerobic part of the workout -- they're jogging while the people are jogging, and asked to sit during in-place activities like lunges and squats, though the least disciplined (ahem Murray) find it a lot of fun to jump on their owners' faces through that part. 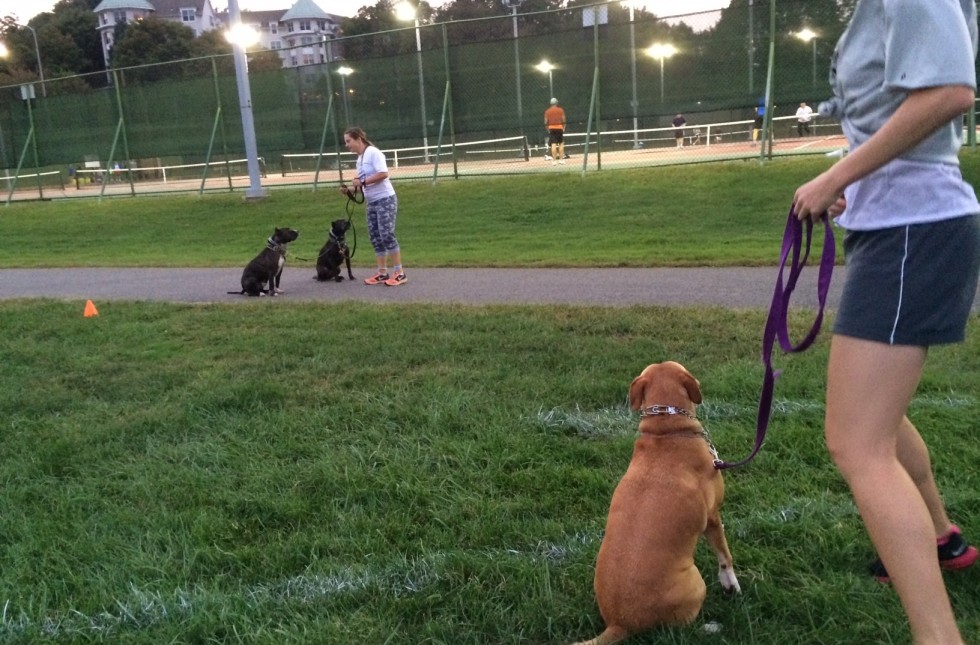 My neighborhood recently got a canine sports club, which I thought I might try one day if management started letting humans work out there as well.

And same with my thoughts about joining a human gym: if such a place would let me bring my dog, of course -- of course! -- I'd go. Probably every day. Maybe even twice or three times a day.

Well, my last excuse for not getting more exercise is gone. I got feeling surprisingly jazzed -- dorky; true -- at the end of this hour. And even Murray was seeming a lot more engaged and peppy than he is about our usual walks. 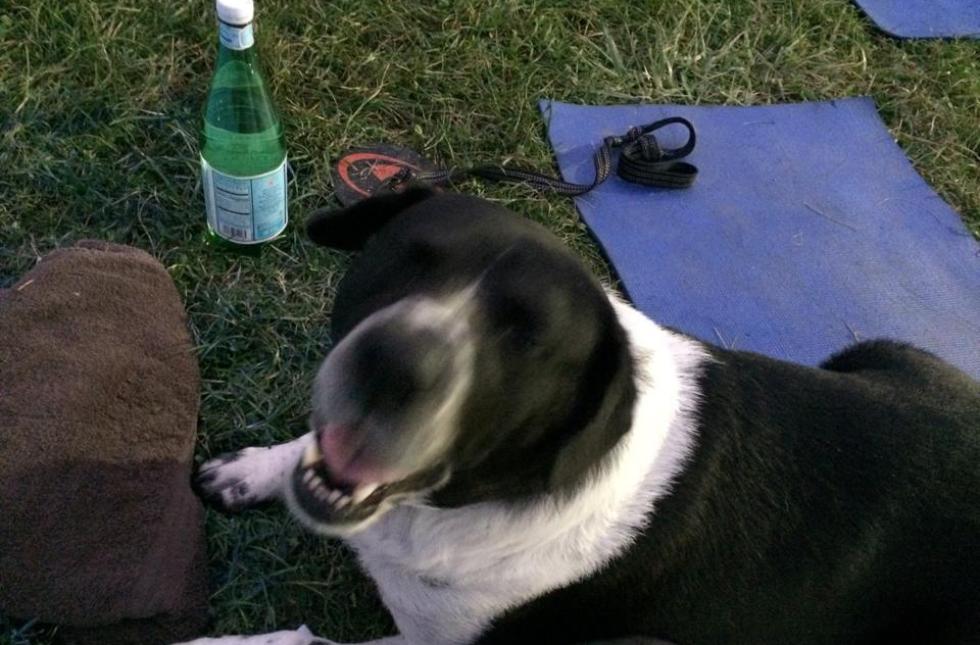 He also loved the treats that Krieg handed out as we were finishing up. Those, alas, were for dogs only. 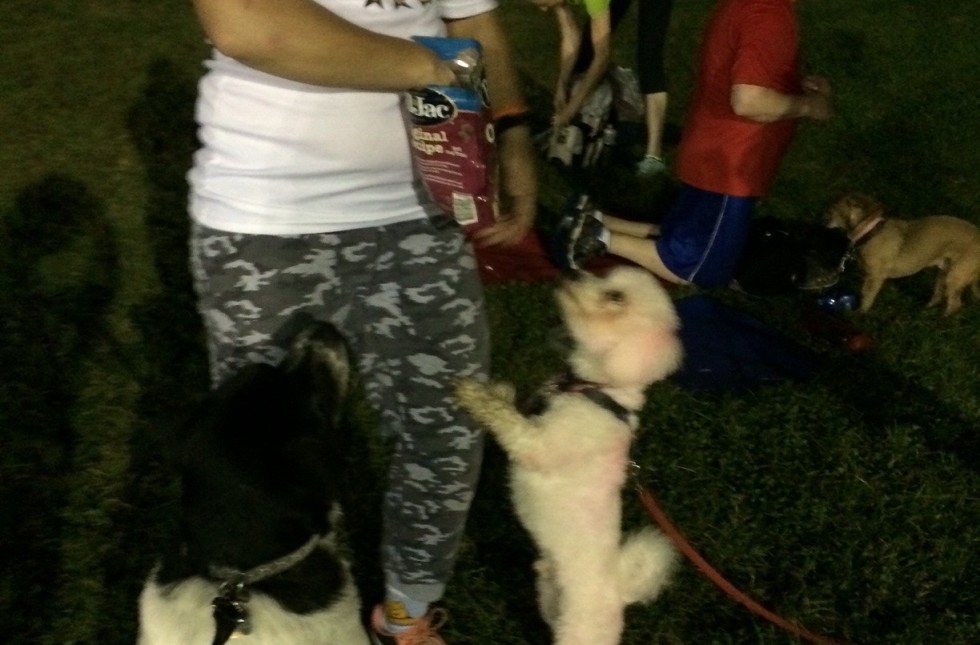 Find out more about Krieg's D.C.-area Thank Dog! Bootcamp here. Find others around the country here.

And get in touch with HuffPost animal welfare editor at arin.greenwood@huffingtonpost.com if you have an animal story to share!

My Dog and I Did a Fitness Boot Camp Together. I Know What You're Thinking.
Animal Photos Of The Week