Did you know that 1 in 4 women in the United States are victims of domestic violence? Did you know that statistic, that probability of occurrence, is the same for girls in high school? That 25% of high school girls have been physically or sexually abused? In fact, when examining our youth population as a whole, that statistic jumps even higher to 1 in 3 adolescents in the United States. Even more alarming, 94% of female victims are between the ages of 16-19, with acts of violence beginning as early as age 11. Once in college, those statistics increase exponentially with almost half (43%) of all college women likely to experience violent and/or abusive dating behavior.

As the United States, in a few weeks, prepares to acknowledge the sixth annual National Post-Traumatic Stress Disorder (PTSD) Awareness Day on June 27th, 2015, and PTSD is an extremely debilitating disorder occurring after a highly traumatic event such as domestic violence, this piece is dedicated to sharing the life of Dr. Ellen Pence, her contributions to the world of domestic violence and the innovative tools she designed and implemented to explain the victim-abuser dynamic and power struggle. Her relentless commitment and efforts generated an entirely new narrative which centers on the termination of victim blaming and provides tangible hope that we may one day resolve this ongoing, ubiquitous issue. As we approach National PTSD Awareness Day, may some of the tools and processes contained herein be of assistance to those that have loved ones who have survived or are still struggling to break the domestic violence cycle.

The Life of Dr. Ellen Pence

Dr. Ellen Pence has been called "the mother of domestic violence intervention," "the rockstar of the battered woman's movement," and by her own choice of labeling, "a workaholic" and "one of those lefty hippie dropouts." The latter comment captures a glimpse of the personality that emanated from the scholar, activist, founder, inventor, partner and mother named Ellen Pence. Such self-descriptions provide insight regarding how she approached her endeavors in helping to bring about successful, concrete and worldwide transformation to the issue of domestic violence.

Ellen Pence was born on April 15th, 1948, in Minneapolis, Minnesota. After high school, she headed North to Duluth, Minnesota, where she would earn her bachelor's degree at The College of St. Scholastica. While she would eventually stray from home to earn her doctorate at The University of Toronto, Dr. Pence would spend most of her life in the state of Minnesota, dedicating a majority of her time to initiating, innovative solutions to a variety of social issues, inspired by her mother, Audrie Pence, who was actively involved in the feminist movement.

Dr. Pence began her activist efforts while in her teen years, in the 1960s, focusing on the housing, antiwar, civil rights and feminist movements. In the 1970s, she took a position with the Minnesota Housing Authority, where Dr. Pence would uncover more hands-on insight regarding the world of domestic violence while trying to provide shelter to its victims who needed to relocate. In 1977, she helped open the Harriet Tubman Shelter while serving as an administrator to four women's programs. In 1980, she and a small group of activists co-founded the Duluth Domestic Abuse Intervention Project (DAIP). She had this special ability to instantly connect with people from all walks of life. From the children and women she would comfort "after witnessing incidents like the strangulation of their mother into unconsciousness," to the police, criminal justice department and state officials, to social service and advocacy organizations, all would agree to engage her relentless quest to end domestic violence.

Through it all, which included multiple arguments and disagreements, Dr. Pence was known to be a likable force and conduit. She believed in stepping away from the traditional approaches regarding domestic violence. Her focus was on both the male and female dynamics of the issue. She addressed the ideology that incarceration should be utilized as a deterrent but she also questioned why it disproportionately affected men of color. She would look for and create humane alternatives and insist on having every level of community involved and on the same page, stating "what are the structures and how do we respond to that violence not in a single faceted way?" She would make many memorable statements as she did in 1983, when she outlined the duality of the role of police from initial "social workers with a gun" to "police officers enforcing a law." All of these assessments would culminate in her being a founder of the Duluth Domestic Abuse Intervention Program and the Duluth model. Dr. Pence was also the President and founder of Praxis International, a non-profit, think tank "dedicated to addressing the needs of women, children and families who encounter domestic violence." In the 1990's she co-authored two books: Education Groups for Men Who Batter: The Duluth Model and A Coordinated Community Response to Domestic Violence: Lessons from Duluth and Beyond. Sadly, Dr. Pence passed away from breast cancer in 2012. She left behind her partner, Amanda McCormick, and their son, Liam McCormick, who at the time of her passing was just age 5.

The 1970s marked the period when Dr. Pence began to have hands-on encounters with victims of domestic violence. The societal response to this issue was "what happens between spouses is consensual, permissible and private." This belief was also reinforced by law enforcement who, "were largely indifferent" and "were taught that domestic violence was a private matter, ill suited to public intervention." Dr. Pence recognized that law enforcement however, was often the first point of contact for victims and batterers. By the 1980s, data confirmed that the most frequent calls police received were due to domestic disturbances. As 84% of women who requested alternative shelter in Minnesota were turned away in 1978, Dr. Pence set out to create systemic change to an issue that had become a systemic dilemma.

In 1977, Dr. Pence was in her twenties when she went to work for the Minnesota Housing Authority. It was there that she began her hands on interactions with battered women, along with their children who were also traumatized. In 1975, the only housing shelter for battered women in the entire state of Minnesota also served as "the upstairs office of Women's Advocates." This shelter, in fact, was the first of it's kind in the entire United States. Dr. Pence struggled to find alternative housing options for these families and recognized that shelter options were a key component in the equation to help end domestic abuse. In 1977, she was one of the initial organizers of the Harriet Tubman Shelter. Today, it is now called the Harriet Tubman Crisis Center and Support Services; it is the largest provider of domestic violence shelter services.

The 1960's and 1970's represented a shift in the "institutional response... from a victim-centered to perpetrator-centered treatment focus" with the goal of preventing recidivism. Dr. Pence agreed with this ideology and co-founded The Duluth Domestic Abuse Intervention Project (DAIP) also referred to as "The Duluth Model," which she would utilize to test this new school of thought.

The Duluth model brought order and collaboration into the world of domestic violence, and was presented in Dr. Pence's co-authored book, Education Groups for Men who Batter: The Duluth Model. Since its inception in 1980, the Duluth model has been viewed as groundbreaking and revolutionary. While the Duluth Model has roots in the feminist theory, which seeks to define feminism as "the radical notion that women are people" it also postulates that "men are dehumanized by their socialization" and that "many forces...have shaped their thinking." As a result, Dr. Pence considered men's involvement as part of the solution while absolutely singling out gender and men as the batterers in need of change. She also added an element of compassion and publicly thanked the men who battered as she saw their participation in the model and their feedback as vital.

At the same time, she was entirely clear that perpetrator-blaming was the focus of advocacy and assistive resources, and maintained that victim-blaming practices were unacceptable and to no longer be utilized. It was quite a contrasting dichotomy to carry out in one model and yet she achieved both goals. What made this model so entirely comprehensive and unique was the inclusion of feedback from the victims and batterers as well as the outreach and multi-meetings that took place to make sure anyone that could possibly be involved in the process was on the same page. Dr. Pence sought involvement and participation from every department and she recognized that the strongest infrastructure would be comprised of well re-trained, pro-active people. Dr. Pence sought specific definitions of words like that battering "is a pattern of actions" and would take the model a step further with the development of wheels that would provide visualizations.

Power and Control and the Equality Wheels

Four years after founding DAIP in 1980, Dr. Pence obtained feedback from 200 battered women and from male batterers and translated their journeys and outcomes into two wheels. The goal of the wheels is to provide a visual regarding the structure within the relationship, within the attachment, and between the victim and batterer. Dr. Pence recognized that "psychology theories are always discourses of power," and created the wheels to better explain the transition of moving from the power and control wheel into the equality wheel, particularly at the post-separation stage. Decades later, these wheels are still utilized worldwide and provide instant insight into the dynamics of domestic violence: 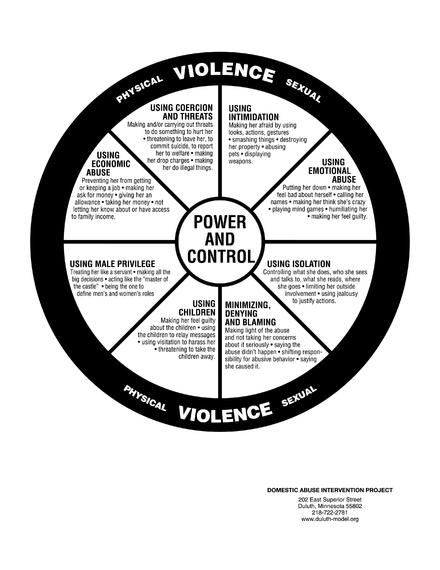 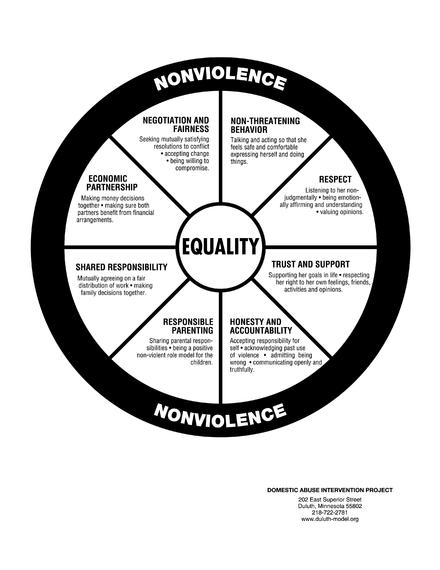 According to the Harlem's Children's Zone, there should be a certain expectation regarding models and outcomes; ten years is a feasible amount of time to "fully implement a pipeline and see major outcomes... and in 3-4 years interim outcomes." In the case of the Duluth model, which began implementation in 1980, it is evident that the model continues to be dynamic and evolve as we make progress in the domestic violence realm thanks to Dr. Pence. She encouraged organizations to become partners in addressing the system changes necessary for victims, abusers, departments and institutions through an intensive, collaborative effort resulting in fewer and fewer cases of domestic violence. In the words of State representative and co-author, Michael Paymer, ""If you want to change the world, if you want to change people, you have to do it with love in your heart. And she did."

Thank you Dr. Ellen Pence. For more information on Dr. Ellen Pence and more about her many contributions please visit: http://www.ncdsv.org/images/DAIP_InMemoriamEllenPence_1-6-2012.pdf