I was informed of Jon Stewart's retirement from The Daily Show by an NPR news alert, which was swiftly followed by a deluge of texts, emails, and Facebook messages from friends. They were concerned about how I was coping with the news.

I responded: "Don't worry I'm in denial! Check back tomorrow when I'm in depression."

I always say that my number one life goal is to do something meaningful enough to be interviewed by Jon on The Daily Show. It sounds like a joke or logic from a misguided value system (because the meaningful accomplishment should be the goal itself, not the means to the goal, duh). However the aspiration is genuine and principled: I consider being worthy of an interview on The Daily Show to be the most honorific validation of one's social, political, cultural, and/or scientific impact within American intellectual-pop culture.

Sure getting a Nobel Prize would be an honor, but being interviewed by Jon because I received a Nobel--that's when I'd pause and think, "oh yeah, I've done something with my life." Now that he's retiring my goal is dead. I guess I'll just become a degenerate.

No, no. I will miss Jon, but I'm confident that the show will carry on with the same character due to its incredible team of writers and correspondents. I've progressed through denial, anger, bargaining, depression, and acceptance--and now I just want to express my gratitude and nostalgia for the sixteen years that Jon has given us. 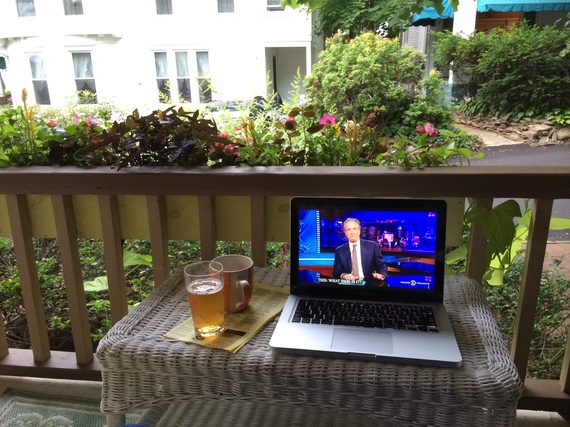 Caption: Watching The Daily Show at my parent's lake house in 2010. 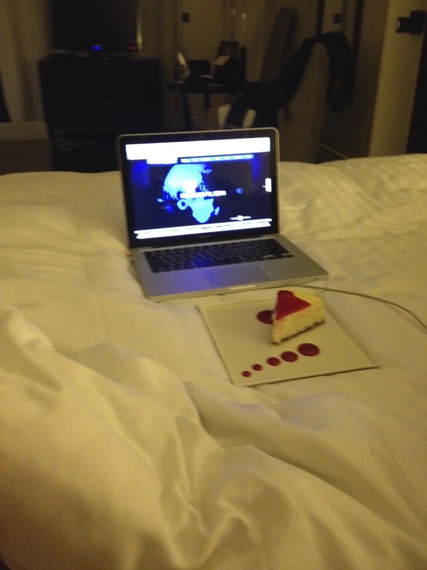 Caption: Watching The Daily Show at the Marriott Hotel in Tsaghkadzor, Armenia in 2014. 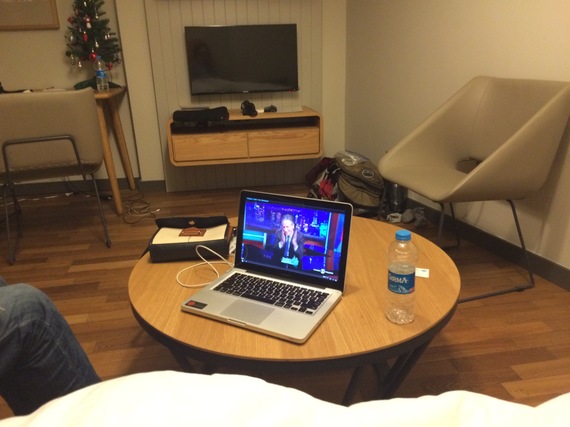 Caption: Watching The Daily Show in Istanbul this January.

This is why I am emphatically grateful for Jon and The Daily Show:

First, in terms of political and social consciousness, The Daily Show has raised me from ignorant apathetic to smart-ass, concerned citizen. In part I used to ignore the news because it was boring: it was Dan Rather constipatedly delivering headlines to my dad, who sat in a lazy boy, eating dinner off a tray in our TV room. When dad got fed up about "the stinking Republicans" etc., we were allowed change the channel to Simpsons reruns. Yay cartoons! Boo news!

But more deterring was the fact that most news is depressing, without prospect of clear and positive resolution. Conventional news shows buffer the devastating nature of their content by ending with uplifting fluff: A football team sang the Frozen song! A potbelly pig and a kitten are snuggling! That's swell, but I haven't forgotten that ISIS and Boko Haram are massacring thousands, gun violence in America is rampant, and Congress is willfully impotent.

The Daily Show, however, provides the right form of comfort: caustic camaraderie. It helps me cope with the disheartening and infuriating problems of our world by reminding me that there are other reasonable people, just as disheartened and infuriated as me. Rather than becoming paralyzed by the absurdity, hypocrisy, and tragedy that dominate current events, we can first of all laugh, and then see what we can do to improve things. Through humor Jon has eased my anxieties and galvanized my activist spirit. It's a cynical and often lazy activist spirit, but it's in there and he knows how to talk to it.

Thank you Jon for making me an informed and caring citizen through your gift of intelligent humor. 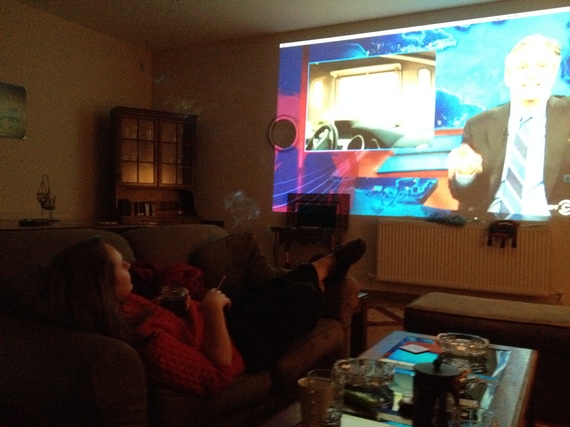