As Thanksgiving approaches, families across the country are preparing to celebrate the holiday through a patchwork of traditions, from fried turkeys to tamales. This is the time of year we take a break from the hustle and bustle of everyday life to express our love and gratitude through good food, football, and leftovers.

Yet for a growing number of our family members, friends, and neighbors, spending hours doting over a turkey or playing a game of touch football is a luxury they don't have time for. They are among the more than 65 million family caregivers who often struggle to provide quality care in the face of devastating chronic diseases like Alzheimer's. In fact, according to the Family Caregiver Alliance, more than 15 million family caregivers are caring for a loved one with Alzheimer's disease or another form of dementia. There are more than 1.8 million Latino family caregivers who will spend this Thanksgiving - like every day - providing high-stress, unpaid, around-the-clock care for a loved one living with and dying from dementia. It's a loving yet hazardous job. According to research, caregivers have lower levels of subjective well-being and physical health than non-caregivers and they regularly report higher levels of depression and other mental health problems.

I'm thankful not just for the selfless example these caregivers set for all of us but for the economic contribution they make to our country on a daily basis. In 2013, family caregivers provided approximately 40 billion hours of unpaid care at an estimated value of $470 billion, representing the largest source of long-term care services in the United States. 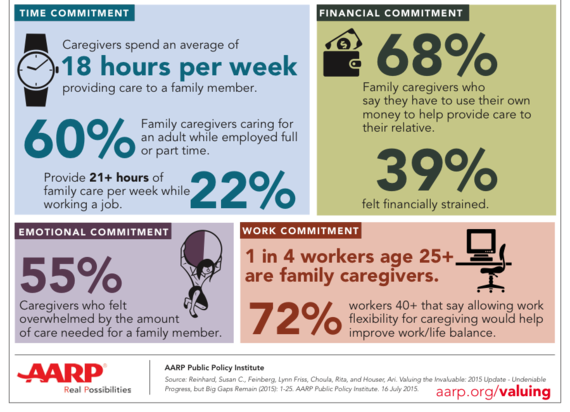 As the executive director of the LatinosAgainstAlzheimer's Network, I have the privilege of working hand-in-hand with powerful caregiver advocates who inspire action through their unrelenting determination to end Alzheimer's. There's Meryl Comer, a trailblazing business journalist turned citizen scientist who is leading a revolution in patient- and caregiver-driven Alzheimer's research while caring for a mother and husband with Alzheimer's, both in her home. Then there's Daisy Duarte, who finds time to engage in advocacy and participate in Alzheimer's clinical research - one of the less than 1 percent of Latinos enrolled in a clinical trial - while caring full-time for her mother with Alzheimer's. She does all this knowing she will almost certainly get Alzheimer's by her 65th birthday due to a genetic mutation that runs in her family. Meryl and Daisy are in the trenches of caregiving, joined by 65 million others, and each day more are enlisted. Every 69 seconds someone in America gets Alzheimer's disease and another family is impacted, another Thanksgiving tradition changed forever.

So as I sit down this holiday season - to both tamales and turkey - I'm thankful for the tough and selfless work of family caregivers like Meryl and Daisy and all they do to preserve the dignity of their loved ones and our country, oftentimes at great expense to their own health and wellbeing. Without them, the ugly realities of diseases like Alzheimer's would be much more severe than they are today.