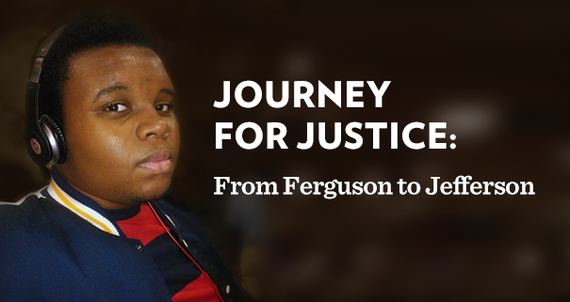 Two days after the grand jury's decision not to indict Darren Wilson for the death of Michael Brown, there appears so little to be thankful for. Decades of overaggressive policing are all too common in all too many communities that some may want to give up.

Today, as we celebrate Thanksgiving, be encouraged that even in the midst of such profound sadness and darkness, there are still glimmers of hope and things worthy of gratitude: We can be grateful for the young activists of yesterday and today, our country's ability to transform for the better and our own capacity to effect meaningful change.

Reports of fires, looting and civil unrest in cities across the country have dominated the conversation. But what has not been amplified are the peaceful protests led by young practitioners of democracy. These young activists transformed an individual incident in police brutality into a global call for social justice. Peaceful, nonviolent protest is part and parcel of our American tradition -- from Selma to Montgomery to Occupy Wall Street. And in each of these instances, our young people have stepped up and stood on the front lines for justice. For each of them, we can be grateful.

We can be hopeful in our country's ability to change for the better. While we have overwhelming work to do in reforming our criminal justice system, we have made some inroads.

We are hopefully nearing the crest of a rising tide where there is increased national awareness and a shift in public opinion about the immorality and unconstitutionality of racial profiling as a viable police strategy and tactic. Now, we at the NAACP know about racial reform. We were founded to combat a form of racialized police brutality known as lynching, which was often done by law enforcement officials, aided by mobs. Between 1862 and 1968, as many as 3,346 black men and women were lynched. We helped bring that practice to an end. We can yet do the same for racial profiling and police brutality. And we are encouraged that today there is a growing consensus of researchers who invalidate racial profiling, citing that it engenders community distrust, makes prosecutions more difficult and makes both communities and police officers less safe.

However, we must still stand firm on advocating for a federal standard on the excessive use of force, both federal and state anti-racial-profiling laws and the elimination of other laws that criminalize our black and brown communities, like the "Three Strikes, You're Out" law and laws that overincarcerate drug offenders.

And for this reason we must be most grateful for and never lose sight of our own ability to effect change -- change in our communities, change in our country and change around the world.

Michael Brown's death is a moment none of us would have sought. However, his death and the death of so many other black and brown brothers and sisters at the hands of police misconduct has served as the catalyst to bring to the forefront the need to end racial profiling and police brutality.

And on Saturday, Nov. 29, the NAACP, including members of our Youth and College division and senior and youth organizations, will continue this work by embarking on a 120-mile, seven-day march titled "Journey for Justice: Ferguson to Jefferson City." The march will commence on Nov. 29 near Michael Brown's home and conclude at Missouri Gov. Jay Nixon's governor's mansion in Jefferson City.

This march is the first of many demonstrations to make clear to the country and the world that the NAACP and our allies will not stand down until systemic change, accountability and justice in cases of police misconduct are served for Michael Brown and the countless other men and women who lost their lives to such police misconduct.

This Thanksgiving, we need not underestimate ourselves. There is much to be grateful for even now. We must be thankful that our power is evident -- in the voices of young and older protesters, in the marchers of the civil rights era, in the lawyers fighting for the rights of the oppressed and for those joining us this Saturday on our 120-mile journey. We will not cower, and we will not capitulate. We will continue to demonstrate our power with both grace and vehemence. We believe in our young people and in the value of their lives, and we will bring police brutality to an end.