If I have seen farther than others, it is because I was standing on the shoulder of giants.
Isaac Newton

"Mike, I will come work with you and be your assistant,"

"You can come Julie, but as my associate and friend"

My heart fills with gratitude when I remembers those words from a great leader, Mike Caslin, who mentored me and sponsored me professionally. Mike believes in servant leadership and felt that when the best leaders leave, people have full confidence they can do it themselves.

At a time when we want to advance more women and minorities in STEM careers, I ponder in hopes of replicating what did Mike do for me and so many others.

In 1992, I was having a bumpy transition from one of my first jobs at 21. At a conference, I learned of a growing movement to teach low-income children how to build their own businesses. Mike was a key consultant at the time.

His office was over 65 miles from where I lived.

On our first meeting, Mike asked me to drive out to his office and stop on the way at the Boston Globe to secure three newspapers with a headline article on the organization, NFTE. The next day, he invited me to a meeting with him and four high level government officials 70 miles in the other direction.

I wanted to volunteer two days a week, but reflecting back, I cancelled interviews and never looked for another job, not for 20 more years. Initially there was no budget to hire me, I just knew this was the right mentor and the right course.

Later in advising on management he taught me the Ronald Reagan adage, "Trust and Verify," and we discussed Joseph Campbell's hero path often.

My self-esteem was a bit low from some missteps I made in a corporate hierarchy, but Mike was oblivious to that, he wanted me to see myself as a leader. "Leaders lead, so lead," he would challenge. He had high expectations and sat with me at a shared computer to write proposals to start youth entrepreneurship programs in New Bedford.

Once funded, Mike selected our pilot to be the toughest alternative school in the region and me to be the teacher, he said "Great, now let's train you to teach," and sent me through a week long certification training in NY. He also encouraged me to go to a student's home and talk to her parents when she stopped coming to school.

I didn't know where the path was taking me, but I followed my mentor and was open to where he led. Each day there was intensity, challenge, joy in the journey, and faith.

A few years later Mike had me training teachers in India and I became the youngest Executive Director at the age off 22 when Mike got a big national promotion. I set up a new office closer to my home in Boston, no Mike there, now I had to fend for myself and grab coffees and inspiration with Mike when I could.

Mike and the Founder sent me to take over Washington, DC to build in 1995 and I started bringing in interns working to replicate Mike's 'belief in me' style of management with sprinkles of high expectations and challenge to leave my professional comfort zone.

There were times in my career when I was at a crossroad or felt like drowning and Mike was always the one who showed me how to get back to shore.

Mike became our Executive Vice President and when Mike left after 20 years, he came to me in Washington and told me he wanted me to go for his job. He championed me and it led to some intense work with the Aspen Institute and to lead national leaders looking at scalability of youth entrepreneurship education in America. My heart soared in this great opportunity and growth.

So how do I thank Mike Caslin for the dozens of chapters in my book of life and the direction? For the belief in me (way before I believed in myself) and belief in the youth of our country?

I thank him with a challenge and a pledge to mentor five young women and men in 2015.

I invite you to use hashtag #ThankItForward to say Thanks a Million! to your mentor too. I encourage you to set a goal to mentor this year with workplace skills. To pay it forward. 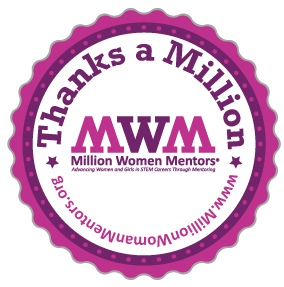