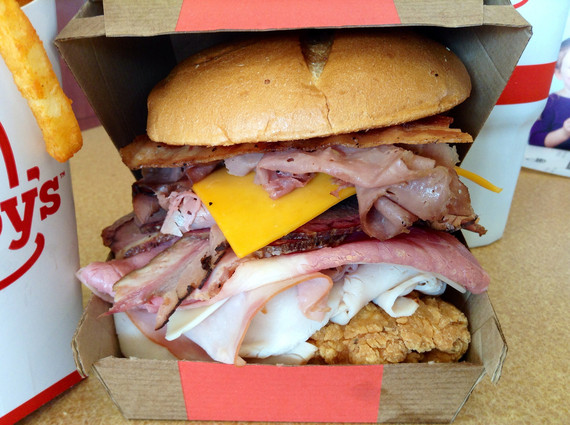 I'm a vegetarian, and I have a message for Arby's: Your bacon is disgusting, and I want nothing to do with it. In your open letter to vegetarians, issued via press release, you trolled us with a sarcastic offer of support and even a hotline. You also attempted to taunt us with a video of cooking bacon.

But it's you who needs the help, Arby's. They say not to feed the trolls, but you so desperately need a taste of the truth.

Any way you look at it, the processed meat on your menu is sickening. Literally. It has sickened dozens of customers with salmonella, landing almost 20 of them in the hospital. Aside from being potentially contaminated with deadly fecal bacteria, it's pumped full of growth hormones, antibiotics, and preservative chemicals, such as sodium nitrite, which the American Cancer Society calls "potentially carcinogenic."

Speaking of cancer, studies show that consuming red and processed meats--which include your bacon, roast beef, ham, and other deli meats--sharply increases the risk of several types of cancer. For instance, eating 50 grams of processed meat per day, equivalent to just two slices of your bacon, increases the risk of colorectal cancer by 21 percent. Try to sugarcoat that, why don't you?

I'd like to live, thanks. I actually like my life a whole lot more than your bacon.

Do you know who else would like to live? The animals who wind up as your meat. Science tells us they're just as sensitive, intelligent, and capable of feeling pain as our dogs and cats, but they are nevertheless tortured by the millions in your supply chain. You serve almost 400,000 pounds of their flesh each day. That's more than 70,000 tons of cruelty each year.

The animals you slap between sandwich buns come from factory farms. Crammed by the thousands--or even tens of thousands--into rank, windowless sheds, pigs, cows, and chickens on factory farms live cheek by jowl, covered in urine, feces, and blood. They are routinely mutilated (body parts are sliced off without painkillers) and mercilessly abused: hurled, kicked, punched, stabbed, dragged, and slammed into concrete floors.

I dare you, Arby's, to eat your beloved meat while watching an undercover video that reveals where it comes from. Better yet, blast these videos on big screens inside your restaurants and see how your customers react. There is simply nothing more unappetizing.

You may have chosen to target vegetarians in your latest advertising stunt because you're scared of us and our growing power as consumers. I don't blame you. The number of vegetarians and vegans in America is skyrocketing while meat consumption has dropped significantly over the past several years. Nasdaq.com recently warned investors of the impending "death of meat." The Dietary Guidelines Advisory Committee--a panel of our country's foremost nutrition experts--recommends Americans cut back on animal products or cut them out completely, as does the United Nations.

The fast-food restaurants embracing this trend are flourishing. Those rejecting it are getting butchered in a market increasingly driven by eco-, ethics-, and health-conscious consumers.

So, Arby's, it's time to seek help. Meat is dead and dying, and your business will someday follow suit if you don't change your ways. Order a free Vegetarian Starter Guide and then give us a call. Be strong. We're here for you.

Nathan Runkle is the founder and president of Mercy For Animals, an international nonprofit organization dedicated to preventing cruelty to farmed animals and promoting compassionate food choices and policies.

Founder and President, Mercy for Animals