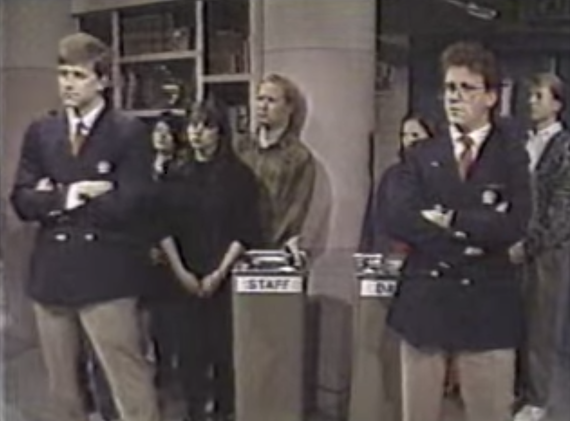 At age 14, I would have had no idea what four of those words meant, but looking back, that is surely why David Letterman's short lived 1980 morning show enthralled me. It's why I have been watching Late Night and Late Show for what? More than 30 years.

Also, at age 14, there's no way I could have known that the guy giving a canned ham to a monkey washing a cat would be 51 percent responsible for my happy marriage, my career in TV comedy and my cherished friends. Yes. 51 percent. Trust me. I did the math.

I became a Page (think Kenneth from "30 Rock") at NBC in Rockefeller Center in 1989 for one reason: to get as close as I could to the epicenter of revolutionary mischievous hilarity.

As part of my Page duties, during the day, I'd give tours of empty Studio 6A where Late Night was taped. I also sat in Dave's chair, despite being admonished by my page bosses not to. I threw pencils through the "glass" behind the desk. I sat on the desk, too. In the afternoon, I wandered the halls outside Studio 6A just to get a glimpse of Dave as he headed to and from rehearsal. At the time, he carried a football and obsessively tossed it to himself and others. On a few occasions, I even manned the Studio 6A desk -- situated in the hall outside the 6A studio -- and handed Dave his dressing room key. On many evenings during my 18 months as a Page at NBC, I also sat the audiences for Late Night.

Just before the show started, Dave would appear to say hello to the audience. He'd crack a few jokes and answer a question or two. Dave had one joke in particular that got a laugh every time he told it. Before someone asked a question, he'd ask "Where are you from?" And regardless of their answer, he'd say: "Oh! By the laundromat."

Just being around was pretty damn great. But for me, the best part was watching the show. There were a few chairs and some standing room behind the last row of audience chairs. That's where the Pages sat during the show's taping. It's where, by osmosis, I learned the business of revolutionary, hilarious, mischievous, subversive, anarchical comedy.

And, there were a few days when watching the show got trumped by actually being on the show. Now and again, the show would feature one of the NBC Pages in some in-studio comedy segment. And for reasons I don't know, I got asked a few times. One time, Dave came back from commercial break and on the TV monitors in the studio, instead of Dave sitting at the desk, the channel changed to various celebrities sitting in Dave's chair -- as if someone was changing the channel. Bruce Willis, then Connie Chung, then Fred Savage, among others. Dave shouted that he knew what was wrong and asked the Page to take care of it. The camera turned to the audience and revealed a guy pointing an oversized remote control. My job was to grab the guy and roughly escort him from the studio.

OK, so it seems clear how Dave influenced my career. Although I was unsuccessful getting hired on Late Night, thankfully Bill Maher was starting up Politically Incorrect, where I spent five years. Now, what about my wife and friend? Well, a few days after I started my job as a Page, another guy started, too. He and I have been fighting about the best way to lose weight three times a week for 25 years. And, about a year after I started as a Page, a pretty girl showed up to start her first day as a Page. The first time I saw her, I knew I would marry her. And I did.

So, thanks Dave for 30 years of revolutionary, hilarious, mischievous, subversive, anarchical comedy. Oh, yeah. And that other junk, too.

Jon Hotchkiss is a TV writer, creator and director. Follow him on Twitter.
Note: Those are his real glasses. Not a comedy prop, despite looking like one.