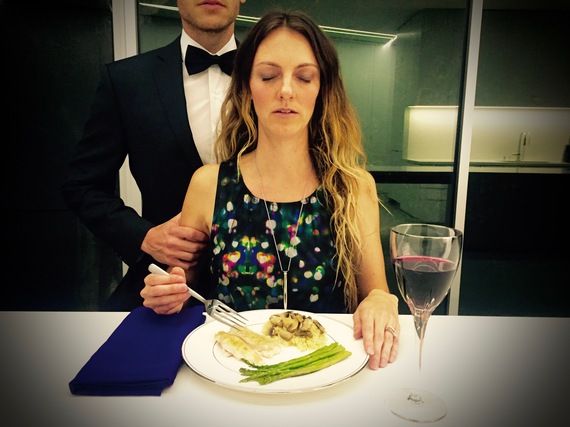 This week, people all across America will sit down together for dinner and express their gratitude for the good things in their lives. And if this year is like prior years, the day after Thanksgiving, we'll wash our hands of the holiday and dive headfirst into the "Season of Giving." But a recent experience makes me wonder what the world would look like if we could keep expressing gratitude and thankfulness all year long.

This story begins on a flight from London to SFO. Turns out that when you write a blog about sex, everyone wants to talk to you about sex and the guy next to me on this flight was no exception. One of the things he shared was the concept of an erotic dinner that sounded both intimidating and intriguing. So when I got home, I hopped on Google to do some research. It appeared the dinners were like any regular fine dining experience with waiters and waitresses, good food and wine. But at these dinners, seduction was also on the menu.

A few months later, I decided to surprise my husband with tickets to one of the dinner events. That night, I threw on a new polka-dotted party dress and a courageous face and got into the car. I felt so nervous on the drive over! I had no idea if I was going to be able to relax and enjoy the flirtations to come or if I was going to clam up and deny my sexuality this veritable playground. I was sweating and feeling a bit of fight-or-flight coursing through my body.

When we crossed the threshold into the dinner, I felt intimate stares from all around the room. As I started to take in the scene, I noticed servers presenting glasses of champagne to patrons with a teasing smile and sometimes an innocent brush of the arm across a back or a leg. At that moment, I took a deep breath and decided to see how it would feel to just soak it all in.

I looked at one of the waitresses across the room and returned her smile. Checking in with myself, I thought, "Yes, that feels good and playful and I don't get enough play in my life." A little bit later, I admired a waiter who was dancing sensually with a waitress. Again, checking in with my myself, I thought, "It feels nice to be able to look at this couple and to imagine not only how they feel but to notice how watching them makes me feel." It felt liberating to be in an environment that allowed me to safely explore these feelings.

Then a bell was rung and we were asked to take our seats for dinner. Much to my delight, the servers I had been admiring were all circling our table one-by-one, taking our napkins and slowly and deliciously draping them over our laps. It was such a simple act, and in the state I was in, it was heavenly. With each course, the waiters teased us by untying their bowties and the waitresses by unbuttoning buttons.

Before dessert, it looked like we were about to be treated with a shoulder and upper arm massage. The men lined up behind the women and I decided to close my eyes and not only relax into the sensations, but also to show my gratitude for this act of service by leaning into each squeeze and caress. And if I am honest with you all, these physical reactions were accompanied by a not-so-small-or-silent amount of moaning.

When the massage was over, I looked at my husband with dreamy eyes and told him how good it felt. He laughed and said "I know" and then let me in on a little secret. While my eyes were closed, my husband was surveying the table and he saw something kind of incredible. The other women at the table were sitting there motionless and silent while they were receiving their massages. And their massages lasted about 10 seconds.

I was stunned. My massage lasted a full three minutes. My husband said that it appeared that my enjoyment was so enjoyable to my server, that he kept going. Wow. Lesson learned. Show my appreciation. All the time, to everyone. So here's to Thanksgiving all year long. May yours be as satisfactory as mine.

If you are interested in exploring your sexuality, check out the books and websites listed at www.downtothere.com/resources. There are also great public workshops available through sex educators and sex therapists who make it their mission to help everyone lead the sex lives they want to lead.