At a time we give thanks to Native Americans, the people of color who shared their limited food with immigrant English Pilgrims it is time to remember all who struggle to help the needy.

During March 2015, homeless Maria saw an ad for a caregiver in Penny Saver. She responded and an agency hired her to care for elderly and victims of terminable illnesses. She worked from 6 in the morning to 9 in the evening, sleeping in the home. She was promised the minimum wage to care for patients' needs. Within weeks, she learned the employer did not provide the necessities of life and had to buy water and food for patients from her personal food stamps. In addition to caring for the elderly and terminally ill patients, Maria was required to clean the home, cook the meals, and assist residents bathe and clothe and engage in toilet needs. She was never paid the minimum wage. Maria is a twenty-first century example of a class of workers enslaved since colonial days. "Invisible Women; The Real History of Domestic Workers in America discusses in detail our historical abuse of domestic workers from slavery to the unsuccessful effort of Reconstruction era domestic workers to organize in Jackson, Mississippi, Galveston, Texas and Atlanta, Georgia to exclusion from the National Labor Relations Act and Fair Employment Standards Act in the 1930s as part of an agreement between liberal Northerners and Conservative Southerners.

Farm Labor leader Cesar Chavez was not unaware of the domestic workers' plight when he began organizing farm workers in 1962. He recognized that farmworkers, primarily workers of color, were forced to live in poverty working in torpid fields while many women of color who were domestic workers suffered poverty in homes of the elderly and disabled they cared for. In part because farmworkers worked in the same general site while domestic workers were spread across the country in separate homes, Chavez chose to focus on farmworkers but did not forget domestic workers. While he was succeeding in his effort to organize farmworkers he saw domestic workers flounder without a union.

In 1972 after Cesar's organizing efforts led to contracts with Delano grape growers who fought diligently to defeat the workers and the tiny group of workers had grown into the United Farm Workers, AFL-CIO, Cesar talked with Ken Seaton-Msemaji and Fahari Jeffers.

Ken began in Watts with civil rights movement in 1964 and moved into the Black Power movement. Over the years Chavez had seen the leadership skills of the couple of color and his trust for them grew. Cesar encouraged Ken and Fahari to start a union to assist domestic workers. Ken and Fahari met with Cesar in Cesar's backyard at La Paz, the UFW headquarters. Cesar told Ken and Fahari that he wanted them to organize domestic workers. Cesar warned them that optimism had no place in union organizing. He warned them, "This struggle will take you the rest of your lives."
Ken and Fahari had proven themselves as community leaders but they had no experience in union organizing. When Ken reminded Cesar that many domestic workers are Latina, Asian and White wouldn't follow a Black, Cesar responded that people don't follow one because of the color of skin but because the leader shows them respect and commitment. Both Ken and Fahari had a little experience in domestic work and both were active in seeking change in an unfair system. Cesar recommended Ken and Fahari follow the CSO (Community Service Organization) program the farmworkers had pursued. Cesar sent Fred Ross, Dolores Huerta, and Gilbert Padilla, founders of the UFW to San Diego to train Ken and Fahari in the CSO method. This involved identifying employees and making home visits 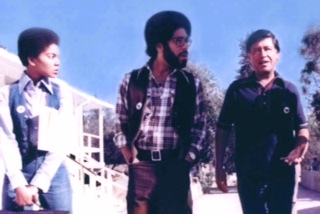 Not knowing who was a domestic worker or who was a domestic worker employer, Ken and Fahari felt hopeless. Together they decided they could ride buses and talk with workers during their lengthy bus journey from their small homes of the lavish homes of the affluent. Ken and Fahari soon learned that most domestic workers are more concerned about the elders and disabled they care for than their own working conditions and did not even know who their employer was. When works began to show interest in a union, they learned that domestic workers, unlike most American workers, are not covered by the National Labor Relations Act. But Ken and Fahari were not defeated. They recalled Cesar telling them Si Se Puede. Rather than resign themselves to defeat, they struggled to create the United Domestic Workers of America. Like the United Farmworkers, they recruited volunteers, especially college students like Sara and home keepers like former UFW volunteer Linda Legrette. Like the UFW they engaged in marches, fasts and suooort of our churches. By 1988, they obtained their first contract in San Diego and through efforts in Sacramento in 1999, finally obtained legislation favorable to domestic workers. Meanwhile, on a national level, Ai-Jen Poo was creating a domestic workers alliance in the eastern United States.

Like their predecessors A. Phillip Randolph who created the The Brotherhood of Sleeping Car Porters in 1925, the first labor organization led by African Americans to receive a charter in theAmerican Federation of Labor (AFL) and United Farm Worker, AFL-CIO, Cesar Chavez they will go down in history as part of the formation of a union by people of color.

Like A. Phillip Randolph and Cesar Chavez, Ken and Fahari have shown their thankfulness for living in the United States by struggling their entire lives to improve the lives of the more needy. Like the Native Americans who helped the English P:ilfrim refuges, A. Phillip Randolph, Cesar Chavez, Ken Seaton-Msemaji, Fahari Jeffers and the thousands of needy domestic workers across the country daily set aside their personal needs to help the more needy.