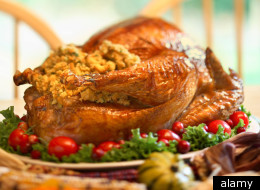 This is the week to plan Thanksgiving Day menus, watch celebrity chefs fry, brine or steam their turkeys, and search for the pie recipe that Aunt Carol used to make. As soon as cooking for Thanksgiving Day begins, caution and calories will be thrown to the wind. Everyone's carbohydrate phobia is put aside while the sweet potato casserole with marshmallow topping is assembled. Cholesterol concerns are forgotten as the third stick of butter is melted into the mashed potatoes, stuffing and pecan pie. And the food scale that silently reproaches us for being ignored is thrown into a drawer so there is room on the counter for making gravy and sausage cornbread stuffing.

Years ago when I was helping a French graduate student studying in Boston overcome her bingeing, she told me, "I don't know why I should worry about my bingeing. On Thanksgiving, it seems as if everyone in the United States is bingeing."

Her remarks came to mind as I glanced at a recent issue of a New York magazine that featured holiday menus. The recipes included intricate salads and a medley of roasted vegetables, but what caught my eye was a dessert recipe for banoffee pie whose calorie content seemed to resemble our national debt. I read the ingredient list over twice, not believing my eyes. The ingredients included two cans of condensed milk (very high in sugar and fat), one cup of butter, three egg yolks, two cups of heavy cream and 8-10 bananas. Oh yes, there was additional sugar, chocolate and flour, but these ingredients were modest in quantity compared to the rest. Who would eat such a dessert? I suspect most of us, if offered a chance.

Are we schizophrenic when it comes to holiday eating? Do all the people who view carbohydrates as the source of metabolic evil and think saturated fat will clog their arteries faster like a traffic jam in Times Square morph into other people on Thanksgiving? Do those of us who focus on the health quotient of our cooking, rather than its taste, feel liberated from worrying about mucous causing dairy products, colon-cluttering red meat and foods that simply taste good without being nutritious?

YES. At least many of us do. I am as guilty as everyone else who puts taste rather than nutritional health as a priority on this holiday. And I suspect that my guests, like yours know it too.

To be sure, there are small changes in a Thanksgiving meal that decrease the probability your cousin will call you up the next day and complain about how much weight she gained. Some dishes like the sweet potato casserole with marshmallows can be replaced with roasted sweet potatoes, hold the marshmallow creme. Gravy does not need to be 50 percent fat, and almost all of the fat from the roasting pan juices can be skimmed off. (I put the drippings in the freezer if I have time so the fat congeals and can be discarded.) Roasting vegetables with a sprinkle of olive oil avoids the need to perk up the taste with butter. Pumpkin and apple pies are certainly less fattening than something like the banoffee pie with its egg yolks, heavy cream and butter; just sideline the whipped cream. And putting out pre-dinner nibbles of dried fruit rather than nuts decreases calories intake a little more, but be sure to offer both so as not to alienate your guests.

We should remember that Thanksgiving is about having a good time in the kitchen and having more fun at the meal. And these days when so many of us rarely, if ever, eat together as a family, simply sitting down together for the Thanksgiving meal is enough reason to celebrate. Just don't ask me how many calories you are eating.