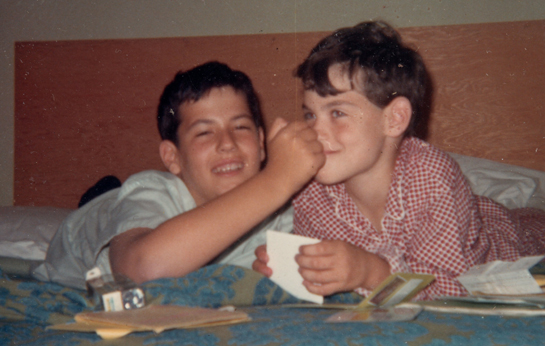 Sometimes my students ask me why I became a teacher. No simple answer really. It was a combination of things, probably starting when, though I am three-and-a-half years younger than my brother, I became the older brother. I'm not sure when exactly that happened but by the Thanksgiving of 1966, I was already looking after him.

I was, of course, also looking out for myself and looking out for our cats. I didn't like turkey and so I needed Popeye and Cat there beneath my feet. I came into the kitchen on the morning of Thanksgiving and asked my mother why we didn't celebrate with our entire family. Mother was stuffing the turkey. The oven was preheating behind her, lofting a sour odor of petrified grease and Easy-Off.

"Our family can't all be together," mother said, reaching deep inside the turkey with her big spoon. "My sisters live in Wisconsin and Uncle Bill lives upstate. We don't even have a big enough table anyway. But we have Aunt Lolly and we have Dad and me and you and Andy."

"And Popeye and Cat," I added.

"No!" she shouted, then gathered herself with a smile. "Thanksgiving is for people, dear."

"Why? Why can't cats be there? "I knew Popeye and Cat would crouch beneath my chair and lick my ankles and wait for me to pass whatever I didn't want to eat.

"Larry, you know how Aunt Lolly is. I don't know why you can't understand."

I loved my Aunt Lolly, who'd given me silver dollars and a big carton of baseball cards for my birthday, and I knew in the vague way a 7-year-old knows that she had suffered some awful trauma with a cat when she was a girl. But I just didn't understand how a grown up could be afraid of my pets.

"Thanksgiving is a time to count our blessings," mother said. She had filled the cavity of the turkey and was pasting the stuffing mixture onto the shoulder. Heat from the oven made a puddle around the still-thawing bird. Mother's hair stuck to the back of her neck. "What are you grateful for?" she asked.

"I have Ron Swoboda's rookie card," I said.

"You have a lot to be grateful for, Larry. We all do," she said, sculpting the curves with more stuffing. We're all in good health. You're doing well in school. We have food on our table, a roof over our heads. And your brother is doing better. He's making progress."

Until recently I'd had no idea Andy needed to do better. I knew my older brother was different from me. He seemed to speak a secret language that only doorknobs and light switches and glasses of liquid could comprehend, and he seemed to be able to speak to them through his mind without words. I'd felt selfish for wanting to lure him out of his distant thoughts and engage him in laughter or a game or a book. Now I knew that it was a good thing, an important thing, to get Andy to pay attention to people.

That was the reason we'd gotten our two cats. Our neighbor's kitty had come through our kitchen window one morning. Andy had crept toward it and touched its nose, then laughed. He tried to make his arm stick out behind him like a tail. He put his face up to its whiskers, then chased the cat around our apartment laughing with abandon. We'd never seen him so outgoing.

This must have posed an awful dilemma for my father. The needs of his autistic son versus the comfort of his dear Aunt Lolly. She was my father's second mother and since she'd become a widow she visited us every Sunday. She'd made father promise that as long as she lived we'd never have a cat.

But the day after Andy's first encounter with the neighbor's cat we were at the animal shelter, father holding a cat in each arm -- a choice for Andy I presumed, but he got so excited at the sight of them and so distraught when father tried to return one to its cage that we adopted both. Andy named the black-and-white male "Cat." I named the tabby female "Popeye."

My brother let both of them sleep on his pillow, but if mother and father had expected a radical change -- if they thought Andy would start to converse with us or respond when we tried to make contact with him -- then they must have been horribly disappointed. Andy still spent most of his time staring at objects, humming to himself, rocking methodically.

And whenever Aunt Lolly came to visit, the cats were locked in a back room, forever consigned to remain out of her sight and beyond her awareness.

"Why are you stuffing the outside?" I asked mother as she padded the turkey's thighs with her big spoon.

"I thought stuffing goes inside."

"Don't worry about it, Larry."

"Because everything's closed on Thanksgiving..." She would say no more about, but then Popeye and Cat strutted into the kitchen, rubbing the refrigerator with their faces. Cat jumped onto the counter and perched a few feet from the turkey. "Get down!" mother screamed, a carving knife in hand. "Get out!" She stomped her feet and they scattered in either direction.

"I know why the turkey has holes in it!" I said, remembering how mother had screamed the same way at Popeye and Cat earlier that morning. "I know why you put stuffing on the outside."

"Larry," she said, admonishing me with her index finger, "if you say anything to Aunt Lolly..."

I was glad -- Popeye and Cat had gotten to have their turkey. They'd gotten to celebrate Thanksgiving. They were part of our family after all.

When carved, the turkey showed no evidence of its missing flesh. Still, father carried it to the dining room table with a tormented expression. Aunt Lolly sipped wine and widened her eyes with excitement. I watched her eat, certain she would know Popeye and Cat had gotten to it first. Mother saw me staring and kicked me under the table.

Andy gazed into his plate and stabbed the meat with his fork pushing it into his mouth with the other hand. He hummed, smiling at the ceiling with each big swallow. Mother told him to slow down. Father asked him if he enjoyed the food. Andy smiled at the ceiling and lowered his face toward the plate, lifting cranberry relish to his lips. Aunt Lolly made a light remark about him being a growing boy. Everyone looked at my full plate, my empty mouth.

I tried to sneak some of the turkey onto Andy's plate, but mother caught me and slapped my wrist. No dessert if I didn't finish it all. I tried to persuade myself to eat. I pretended that I was Popeye on the kitchen counter last night. All meat is good -- even if it's frozen!

I said, "Meow," and my brother looked up smiling. I propped my hands atop my head like cat ears and ate with my face in the plate. "Meow! Meow!"

Aunt Lolly gasped. Mother kicked her foot into my shin. I picked up my face and told her I was sorry. Mashed potatoes were stuck to my cheeks. Andy looked up from his plate and smiled. "Cat," he said, laughing, then stood up, knocking his chair backward, and ran away.

Andy ran back in shrieking, "Meow." The cats were behind him. Popeye leapt onto the table. Cat dove under my chair. Aunt Lolly cowered, then stiffened and mumbled as if encased within a wall of ice. I'd always wanted to see what would happen if she saw a cat, but now I was afraid she'd become like Andy, retreating into some impenetrable interior world.

"Get out!" I told the cats. Mother went after them with a big fork. I snatched the meat off my plate and waved it past Popeye's nose to lure him and Cat away.

Father knelt next to his petrified aunt who was unable to speak. Andy sat back down next to them. It's OK," my brother said. "Aunt Lolly , don't be afraid. Cat just wants to lick you."

My parents stared, unable at first to comprehend the enormity of their Thanksgiving blessing.