The scariest thing about the modern American Thanksgiving is the bounty of leftovers that will haunt the nation's refrigerators for days to come -- the lingering decay of gravy, the ghosts of turkeys past.

But an old custom from over a hundred years ago, especially popular among poor New York City children, might scare the stuffing out of a Thanksgiving dinner party today. Imagine opening your home to invited guests, only to find a group of children in wretched and unsettling disguises, disfigured masks and poverty-inspired costumes, knocking at your door and begging for sweets.

If that weren't enough, the boys might be wearing their sister's dresses in an act of zany cross-dressing. 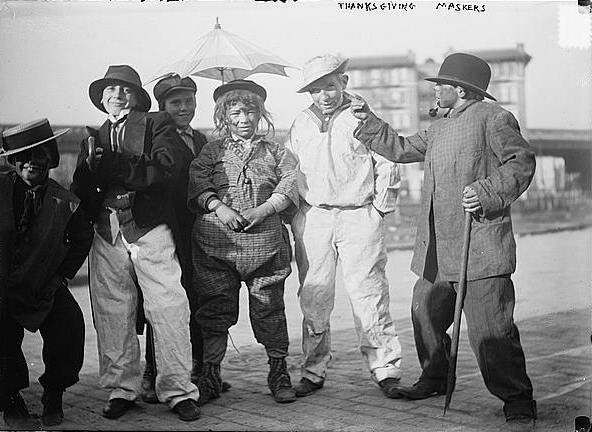 New York boys in a wide range of curious garments, 1911. (Photo courtesy of the Library of Congress)
Thanksgiving 'masking', as it was often called, stemmed from a satirical perversion of destitution and the ancient tradition of mumming, where men in costumes floated from door to door, asking for food and money, often in exchange for music. In the 19th century, makeshift Thanksgiving parades -- fantasticals -- featured New Yorkers marching through the street in garish costume, most likely inspired by Guy Fawkes Day. By the late 19th century, these had morphed into a day for children to take to the street in ragamuffin garb, going from door to door, begging for fruit, candy and even pennies.

"Every street had its band of children," proclaimed the New York Tribune in 1901, "dressed as ragamuffins, who kept in the open air for hours." 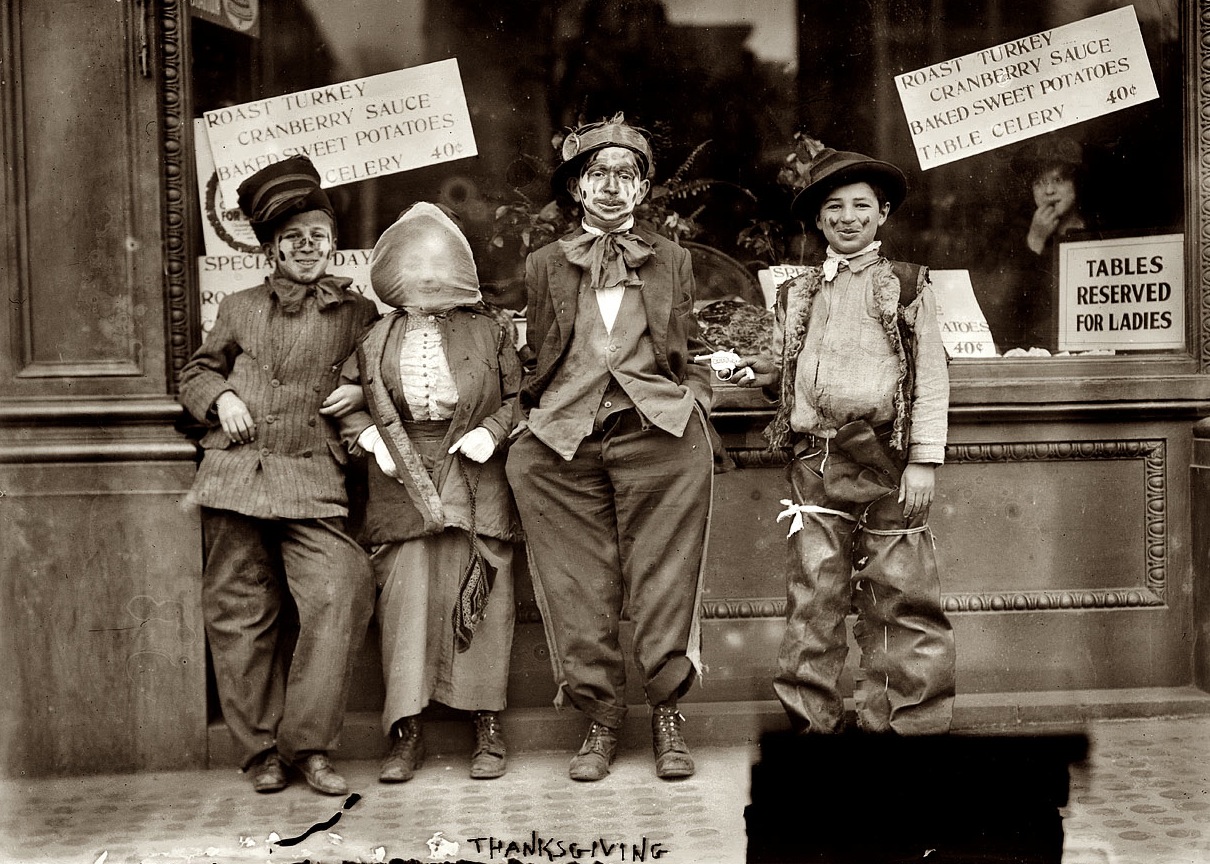 (Photo courtesy of the Library of Congress)
Proper families were certainly scandalized, even as their own children snuck out the back door to join in the fun. In 1899, delightfully warm weather had the New York Times proclaiming, "Thanksgiving masquerading has never been more universal," the streets filled with "Fausts, Filipinos, Mephistos, Boers, Uncle Sams, John Bulls, Harlequins, bandits, sailors." While in the poorer neighborhoods of New York, "a smear of burned cork and a dab of vermilion sufficed for babbling celebrants."

"This play of masking is deeply rooted in the New York child," said Appleton's magazine a few years later, in 1909. "All toy shops carry a line of hideous and terrifying false faces or 'dough faces' as they are termed on the East Side." 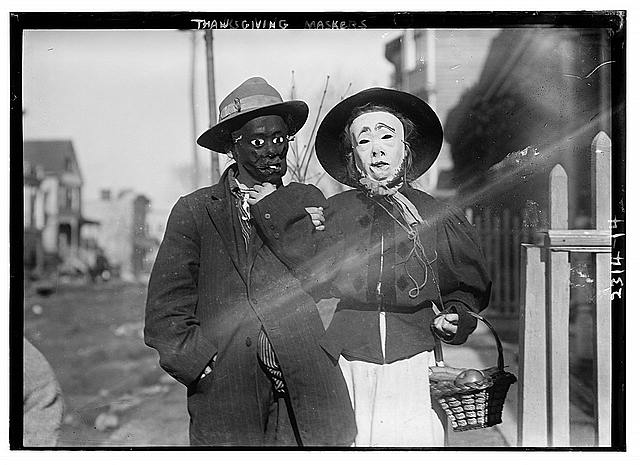 (Photo courtesy of the Library of Congress)
Masking would have had obvious appeal to young boys and teenagers, an excuse for a bit of mischief on such an austere holiday.

Dressing in girl's clothing -- perhaps the most accessible 'costume' for many boys -- was among the most popular options. According to Appleton's, boys "tog themselves out in worn-out finery of their sisters" and spent their afternoon "gamboling in awkward mimicry of their sisters to the casual street piano."

The key was to look as disheveled and homely as possible, an almost perverse custom given the poverty in many sectors of New York at this time. A 1910 book called Little Talks For Little People spelled out the dress code: "Old shoes and clouted upon your feet, and old garments upon you. Clouted means patched."

While the chaotic tradition was associated with juvenile shenanigans, some educators saw a bright side to the tradition, especially in the waning years of World War I. A writer on early Kindergarten practices suggested that "the masking on the streets of Thanksgiving Day ... has its redeeming quality, in reminding the children of our dear soldiers' need for real masks."

They would, of course, be referring to gas masks. A disturbing classified ad from 1919 even offered a World War I gas mask as an 'ideal Thanksgiving mask.' 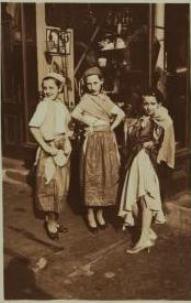 These fabulous Thanksgiving maskers appeared in the streets of the West Village in 1933. (Photo courtesy of the New York Public Library)
This custom was mostly frowned upon by polite society as a distraction from the historic and somber traditions of Thanksgiving. Sidling up to a dinner table wearing costume makeup or an oversized gown was certainly no way to pay tribute to American providence.

By 1924, New York could focus its holiday cheer onto more controllable pursuits with the debut of the Macy's Thanksgiving Day Parade. Within a couple decades, it appears that the merry tradition of Thanksgiving masking slowly relocated over to the less dignified Halloween, becoming codified into the ritual of trick-or-treating by the mid 20th century.

This article is a revised and greatly expanded version of one that ran on the Bowery Boys website last year.