When it comes to setting our Thanksgiving table, most of us know very little about the history of the elements that decorate our tables. We spoke to Jim Baker, the author of "Thanksgiving: The Biography of an American Holiday," Richard Pickering, the Plimoth Plantation's deputy director and Amy Traverso, the senior lifestyle editor of Yankee Magazine for a mini-crash course in how our tables got this way -- and some myths about the first Thanksgiving.

The First Celebrations Were Held At Multiple Tables. 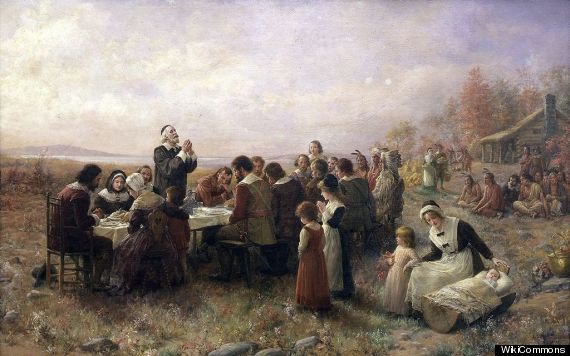 "If you Google pilgrim paintings... there are these gorgeous 1930s paintings of Pilgrims sitting at a very long table and these beautiful Pilgrim women walking along the table with steaming turkeys, and there are a couple Native people sitting on the ground at the end of the table," says Pickering. "Actually, you’ve got 48 people surviving the first winter in Plymouth, and at a minimum there are 95 Native men accompanying [them.]" Pickering says that at that feast, since there were so many more Native Americans there than we have imagined, they would most likely be dining in small groups, rather than one large table.

The Cornucopia Is Older Than You Think. 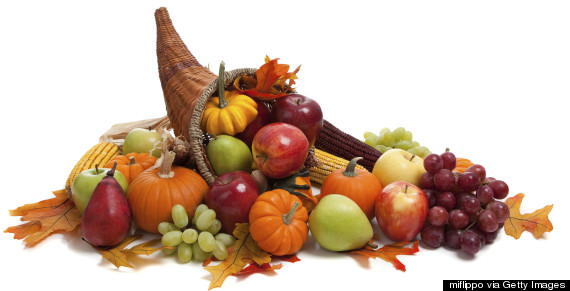 Those horns filled with fruits and vegetables you see on many Thanksgiving tables are actually a symbol from Greek mythology, displaying a magical goat's horn, which could be filled with whatever the owner wished. The word cornucopia originated from cornu copiae, meaning "horn of plenty" in Latin, and its first known use was in 1508.

Baker estimates that the cornucopia first appeared in glass, pottery and silver in the late 19th century, while basket versions arrived in the 20th century.

Traverso says that corn saved the lives of the first settlers during their first harsh year in the country. Since many of their other crops essentially failed (including bean crops), corn became a saving grace, mostly because they were taught how to properly grow it. "The symbol of the corn is so significant because the corn is what saved the pilgrims from starvation," says Traverso. "They really didn’t know how to farm in this climate. It was Indian corn, as they called it, which was taught to them by the Native Americans living at the time... that kept them alive."

Even At The First Thanksgiving, Sports Were Entertainment.

"In the one eyewitness description that we have of this event, there is just as much emphasis on the sports and just as much emphasis on the military practices as the dining," Pickering says. "It was an opportunity for the English men -- now that their agricultural labors were put aside -- to be able to muster and practice, because they were also soldiers now. There's no one else to defend them but themselves." Pickering says games such as running races and pitching the bar were played during the first celebration.