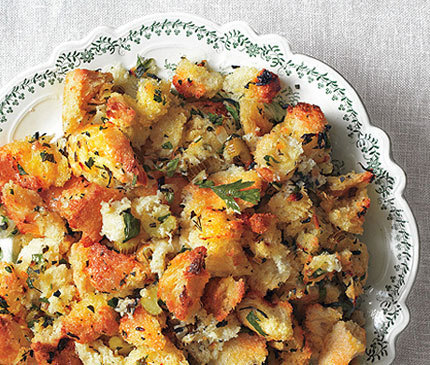 Since Christmas ads appeared before Halloween this year, it's high time we talked turkey about Thanksgiving. One of my neighbors asked me about turkey stuffing the other day. Should she stuff her bird or not? Talk about a loaded question! Stuffing and where you cook it is one of the most potentially contentious topics within family Thanksgiving traditions.

Millions grew up like I did, with stuffing inside the bird. According to the current recommendations of the Food Safety and Inspection Service (FSIS), a division of the United States Department of Agriculture, my family would be potential candidates for food poisoning today given the way my mother used to prepare Thanksgiving. She tested turkey doneness by wiggling the drumstick to see how loose it was. But test the stuffing? Ridiculous, she'd have said. And how could she? Digital thermometers hadn't been invented yet. The concept that the stuffing might not be cooked through was not on the radar then. And no one ever got sick.

But that was a different time. Old pathogens have gotten stronger and new ones have emerged. I've read enough on the subject to have a healthy respect for these microbes. Cooking your stuffing outside the turkey is the safest and best way to go in 2013. Without the large turkey cavity empty, air circulation in and around the bird improves, allowing it to cook faster and more evenly. All those juices that used to go into the stuffing? They aren't lost! They collect in the bottom of the cavity, and when poured out of the perfectly cooked bird and into the roasting pan, they make a better gravy.

The crux of the turkey stuffing problem is this: A whole turkey is at its juiciest best when cooked until the meat, when tested in several places with an instant-read thermometer, has reached 165°F. If the turkey is stuffed, the stuffing will not have reached that all-important safe temperature. Stick your thermometer into the middle of the stuffing and you'll see for yourself.

In the recent past many many of us in the food media world recommended removing the partially-cooked stuffing from the perfectly-cooked bird and continuing to cook the stuffing outside the bird in a baking dish in the oven or microwave. This seemed like the ideal solution, but these days the FSIS doesn't agree. Kathy Bernard, the Technical Information Specialist in the Office of Public Affairs and Consumer Education at the FSIS told me that when you remove stuffing that isn't fully cooked from a fully-cooked bird you risk cross-contamination. Accidents do happen. The current recommendation from the FSIS for stuffed turkeys is to cook them until the stuffing is 165°F. no matter how overcooked the rest of the turkey may become.

The good news is that stuffing cooked outside the bird has so much more going for it (just look at the photo above and its recipe)! Texture for starters. As long as you douse the stuffing with good stock along with a couple spoonsful of flavorful turkey drippings from the roasting pan, and bake the stuffing covered to start, then uncovered later, you will end up with the delightful contrast of lovely crisp edges of toasted bread covering a jumble of tender moist innards.

Truth be told, I never liked the stuffing cooked on the inside, anyway. It's one-dimensional: mushy bread. There's so much other soft stuff on the table--mashed potatoes, sweet potato purée, cranberry sauce, and later pumpkin pie--that I crave some crunch. And one of the best ways to get it is to cook your stuffing outside the turkey. The choices are clear. If you want juicy meat with a combination of crisp and tender stuffing, cook the stuffing outside the bird. If you like overcooked turkey with wet stuffing, cook the stuffing inside the bird.

And speaking of the instant read thermometer: You get what you pay for. High end ones read the temperature in three seconds. More affordable but still good-quality ones read it in six seconds.

As for where to stick the thermometer, the FSIS revised their recommendations a while ago to account for the buxom birds Americans love. No longer is it sufficient to test the innermost part of the thigh. You've got to test the thickest part of the breast, too, as well as the innermost part of the wing joint where it connects to the breast. And because ovens can be temperamental, with hot and cool spots, it's best to rotate the roasting pan every time you baste the bird, and take the temperature on both sides of your turkey.

BTW is phone-texting shorthand for "by the way." This Thanksgiving, make BTW your shorthand reminder to test the temperature of the turkey breast, thigh, and wing!

If You Drink A Lot Of Nondairy Milk, Is It Better To Buy It Or Make It Yourself?