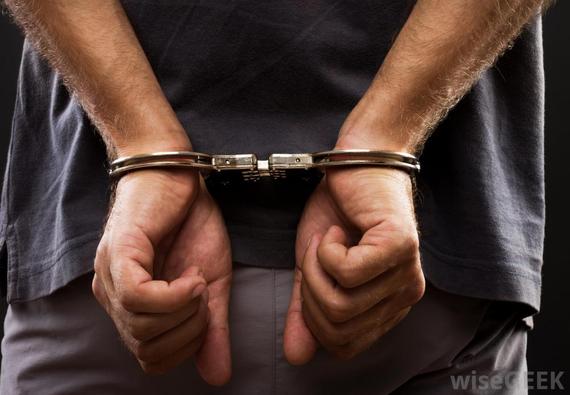 "Ladies and gentlemen, may I have your attention?!"

I sat on the floor of cold brick-shaped pavers, in the lobby of Oakland's Wiley W. Manuel Courthouse. The police megaphone sounded the warning.

"This is your third lawful order to vacate the premises!"

Two items rested in my lap: a chumash, a bound volume of the Jewish Torah, and a simple square of cloth that read, in block letters, "Black Lives Matter."

"If you do not comply with this order, you are risking arrest!"

The risk was not mine alone. Flanking me were other religious leaders, 14 of us, in solidarity with 14 African American activists who, on "Black Friday" 2014, had chained themselves to the West Oakland BART train platform, blocking service for several hours.

The activists' message was clear: on Black Friday -- that brutal spectacle of unbridled commerce and business -- as long as black lives were at risk, there would be no business as usual.

"I repeat! If you do not comply with this order, you are risking arrest!"

But unlike white protesters who had similarly blocked highways and mass transit, the "Black Friday 14," as they came to be called, were not charged with minor infractions and released. They faced criminal charges. And so we sat, and we sang, and we shouted, 14 religious types, one year later, refusing to move, demanding that the charges be dropped. Even though the courthouse was closing. Even though it was the day before Thanksgiving.

I've been arrested before at other protests, in both Oakland and San Francisco. In my experience, the arresting officers have been kind and polite. But as the phalanx of officers moved in, I noticed one in particular, her hair pulled back in a severe bun, framing a face creased with anger. She shouted directly into my right ear.

"You know I have a family!"

In the midst of the mounting chaos, I struggled to understand what she had said. A beat later I realized she was angry at us for delaying her return home -- perhaps to enjoy Thanksgiving with the people she loved.

Though I had been shouting for hours, I strained to formulate any coherent response. "People are dying," I finally stammered. "They don't have families anymore."

This only heightened her anger. "But I have a family! We could all be going home now. It's just rude!"

Rude. As if I had cut in line at the market, or used up the toilet paper without replacing the roll. What's the proper response to someone who hears an anguished cry of sorrow and mourning primarily as a breach of etiquette?

As her colleague tightened my metal cuffs, our eyes met. "There's people who will never go home tonight because they're dead," I said. "That also seems pretty rude."

In my retelling of the story over the next few days, I egotistically cast myself in heroic light. After all, I had spoken truth to power. Only later did it occur to me that, in that moment, I had done something that could have gotten me seriously hurt, or worse, were I a person of color. I had mouthed off to a cop. Twice. But I'm not black in America. The officer, frustrated, simply walked away.

It is, of course, safe to say that the kind treatment I received from law officers in previous protests had more than a little to do with my skin color.

That Ol' White Privilege got me under its spell.

After our arrest, all 14 of us were booked and confined to holding cells. One of the officers let me keep my chumash. (Again -- my privilege at work.) Alone with the Torah, I read the story of Moses' parents sending him down the Nile in a basket, desperately hoping their baby boy would somehow escape Pharaoh's death machine.

As the basket floats down the river, Pharaoh's daughter and her maidens go down to the Nile to bathe. Moses' basket interrupts the proceedings. Talk about rude. Pharaoh's daughter instructs a servant to retrieve the basket -- saving the baby's life. The Hebrew text reads va'tiftach, which is commonly translated as "she opened it," the "it" being the basket. But that's not what va'tiftach means. It just means, "she opened."

Pharaoh's daughter has a family. Her family is the very power behind the pyramid. Her family ties provide every reason to close her eyes to the suffering of the Israelites. But she opens herself. Opens her eyes, and her heart. And because she does, Moses too gets to have a family. And so, too, do I. The family of the Israelites, precursor to today's Jews.

I take no pleasure in the fact that the officer I met that night was late to her family Thanksgiving. Still, I don't think it's rude to ask that everybody get to enjoy the blessing of family. Even if they block a BART platform. Even if they jaywalk, or sell some loose cigarettes, or play their music loud, or walk down the center of a street, or even if they mouth off to a cop.

Even if they're black in America.