Just when it seemed like really old news would remain really old news, religious extremists popped back into the headlines. Paul Broun (the scientifically illiterate Congressman from the state of Georgia who is a sitting member of the House Committee on Science, Space, and Technology) insisted that Planet Earth was formed in six days and that "All that stuff I was taught about evolution and embryology and Big Bang theory, all that is lies straight from the pit of hell. And it's lies to try to keep me and all the folks who are taught that from understanding that they need a savior."

Back in the mythical land where the stork still delivers newborn infants, an old video of Missouri Congressman Todd "Legitimate Rape" Akin surfaced in which the father of six home-schooled children demonstrated his acute ignorance of human sexuality by asserting that doctors perform abortions on women who aren't even pregnant! 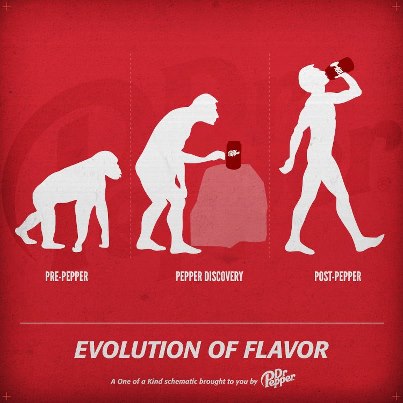 In her blog post on Salon.com entitled "Creationists Take On Dr. Pepper," Mary Elizabeth Williams quoted such horrified comments as "I didn't come from no ape the great creator made me GOD!!!!!!!" and "Let me believe in a God that created me. I'll let you believe that you came from a rock." It's too bad these religious fools weren't able to attend the 2012 San Francisco Fringe Festival, where Biblical literalism got royally (and deservedly) trashed with satirical and surgical precision.

Two one-act plays offered unique takes on The Great Flood from a more decidedly different perspective than the Scripture quotes so conveniently regurgitated by many Christians. Unfortunately, too many Christians can't accept the fact that the Bible itself is a work of fiction.

My father was a science teacher who, when I was very young, introduced me to the wonders of prehistoric life. As a result, I've always been amazed at the lunacy exhibited by born-again Christians who insist that man co-existed with dinosaurs. Whether these people believe that The Flintstones and Jurassic Park were documentaries or that the devil is in Darwin's details, their blazing stupidity, willful ignorance, and distrust of science are learned behaviors.

David Caggiano has been working on Jurassic Ark for the past few years, polishing his monologue at The Marsh and several other local venues. Directed by Mark Kenward with a rip-roaring sense of fantasy that captures and enhances the biting satire in Caggiano's first solo play, this piece is a breathtaking joyride through the delusional world of fundamentalist Christianity and the cynical illusions created by Hollywood filmmakers. 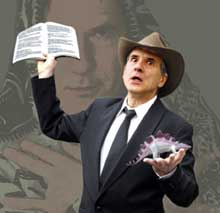 A well-meaning preacher who struggled to save souls in San Francisco, Brother Dallas succumbed to the lascivious charms of a transsexual hooker who showed him what true rapture can really feel like. After receiving some money, he decided to pursue his bliss: creating a 3D film about Noah's Flood and what the earth was like when when men walked with dinosaurs.

Brother Dallas's script includes a hilarious scene in which a father and son unleash their pet dinosaur as well as a sequence involving a frustrated God, a hungry pterodactyl, and its unwitting human prey. Then there are the Hollywood producers and filmmakers who have figured out how to spice up Brother Dallas's original treatment in their attempt to make his film as marketable as Mel Gibson's 2004 epic, The Passion of the Christ.

Caggiano is an exceedingly likable performer whose writing skewers Creationism and Hollywood with equal glee. His deliciously droll show is blessed with a great movie-style soundtrack by John Mazzei which makes Caggiano's imaginary dinosaurs and pterodactyls seem every bit as memorable (in the most bizarre sense of the word) as some of Stephen Spielberg's creations.

What makes BibleNOT: Stories For Grown Ups so much fun is that the playwright is also a clergyman. Well versed in the Bible, he has been able to find comic gold hidden in scripture and new interpretations of Biblical stories most of us have heard repeated since we were toddlers. As Charley Lerrigo explains:

I grew up thinking that the Bible was a very serious book which would give me all the answers I need in Life. I never laughed at Bible stories, though, except nervously. They were scary or pious and so righteous that surely they were about someone else. Then I grew up and I learned a lot more about the Bible. I discovered there's more than one way to read it and understand the stories it tells. I began to see the lives it described and the God it references in a new way. The God of the Bible and Life became not a crabby, old guy, but a wonder-full Being (or Force) who's big enough to include laughter and collaboration as well as pain and obedience in perplexing unity.

At that point the Bible became wonder-full -- a gateway to other stories and thoughts that affirm the fullness of Life that truly are about me and the people I meet. I began to read its stories in a way which sometimes raised more questions than they answered. I've written BibleNOT! with the hope that it will present a faithful and playful reconnection with some very old stories and ancient truths. Not just for people who believe, but for people who are becoming, who are paying attention to what's happening around them, and who are wrestling with what it means to live authentically and openly enjoying the fullness of their wild and precious lives. 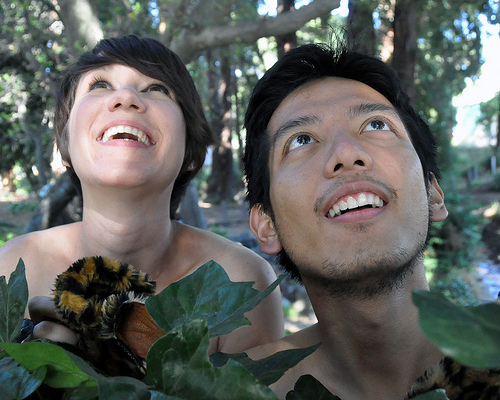 Karen Biscopink as as Eve and Louel Senores
as Adam in BibleNOT: Stories For Grown Ups

As directed by Ben Brotzman, BibleNOT: Stories For Grown Ups begins with Adam (Louel Senores) and Eve (Karen Biscopink) trying to figure out their next steps in the Garden of Eden. Eve is tired of being called "Hey, you!" Adam would really prefer to be named "Hot Stuff." Fascinated by the collection of shoes that has magically appeared at the side of the stage, Eve informs Adam that he can be in charge of fashion (whatever that is).

The fun continues as the simple-minded Noah (Charlie Shoemaker) is visited by a very impressive God wearing a cocktail dress (Melissa O'Keefe), who gives him the dimensions of the ark he should start to build, telling Noah that she'll give him enough time to grow trees and gather the animals before she brings on the flood. Noah (who has always prayed to a male God) may have trouble getting with the program, but his sharp-witted wife, Na'amah (Lynn Sheridan) takes one look at God and has no trouble understanding who's in charge. 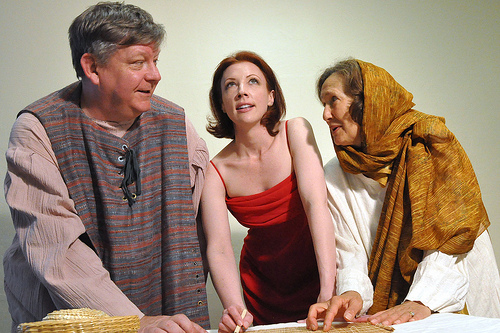 Charlie Shoemaker as Noah, Melissa O'Keefe as God, and
Lynda Sheridan as Na'amah in BibleNOT: Stories for Grown Ups

Lerrigo's script takes a more serious turn as Moses (Steve Menasche) tries to explain to his wife, Zipporah (Tristan Cunningham), that while he was up in the hills he saw a burning bush and heard the voice of God telling him that his people needed Moses to lead them out of ancient Egypt. 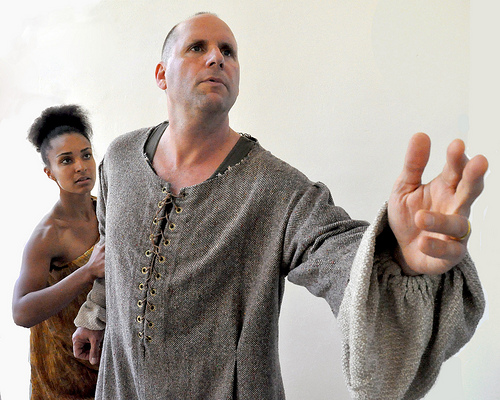 Tristan Cunningham as Zipporah and Steve Menasche as
Moses in BibleNOT: Stories For Grown Ups

Zipporah's reaction is not as docile as most people expect, as she asks Noah a series of tough questions that he finds almost impossible to answer. In the final scene, Pastor Bob (Charlie Shoemaker), finds himself unprepared for and unable to accept the second coming of Jesus (Tristan Cunningham) at his Christian social services agency in modern day San Francisco. Why? Homeless and hungry, Jesus has been reborn as a woman of color.

The deftness with which Lerrigo has turned the assumptions and expectations of contemporary Christians upside down and inside out is a joy to behold, not only for his theatrical craft but for his brilliant use of character development. The final scene, in which Pastor Bob tries to distance himself from Jesus is a lesson in true compassion that should be seen by those who are so ready and eager to denounce "the other" in the name of their lord.