New York City's Pizza Rat stole hearts and minds recently when he attempted to carry a piece of pizza down a flight of stairs into the subway.

I assume Pizza Rat stole the slice to snack on later. But in my experience, rats prefer toothbrushes - and I'm concerned Pizza Rat is on its way to find mine.

The first time a rat ate my toothbrush was in Kenya. I was staying in a tented camp in the Maasai Mara game reserve with my mom and sister. They were in one tent, and I was alone in another next door. We were as far away from the lodge and other tents as possible.

Wild animals could - and did - roam freely through the unfenced compound. During the day this was great - seeing so many beautiful animals up close, right outside my tent. But at night, the staff repeatedly warned us not to leave our tents unless accompanied by a watchman because of the "dangerous nature and propensity of all wild animals."

On the second night a crashing sound awakened me. Alarmed a wild animal had decided "glamping" inside my tent beat roughing it outside, I lay quietly for a minute, waiting for whatever might come next. When nothing did, I told myself to relax. The wind - which I supposed was blowing inside my tent - had probably just knocked something over. I started to fall back to sleep.

At that precise moment the cacophony started. I knew the shuffling, banging, chewing, and slurping noises I heard were not the result of wind. The noises were too loud and persistent to deny. Now I was really scared, but doing nothing was not an option. Not knowing what was causing the noises was far worse than knowing.

I grabbed my flashlight, my trusted bedmate while in remote places. I told myself I had nothing to fear but fear itself (thank you, FDR). Then I flashed it toward where the noises were emanating - the area that separated the toilet from the rest of my tent.

In the beam of light I saw a giant rat standing on my sink gnawing, chewing, and/or sucking on my toothbrush. Maybe all three. It was hard to tell.

Startled by the light, the rat starred up at me, then dropped my toothbrush, jumped down, and disappeared into the darkness. I started screaming like someone who had seen something much worse.

Certain the rat was still in my tent, and heeding repeated warnings to not leave its safety at night, I did what any self-respecting 33-year-old woman would do:

I started screaming for my mother.

"HELP! There's a giant rat eating my toothbrush!" I shouted. When I finally roused her (and my sister), mom yelled back from her tent, "Don't worry. It's gone."

She promptly fell back asleep, I assume, since no further sage advice followed. And my other protector, the promised night watchman, was a no-show.

I was on my own, with nothing but a flashlight.

The flashlight helped me quickly find my flip-flops, which were next to my bed, which is where I keep shoes when traveling, because I am far better at dealing with scary and/or gross things with my shoes on. I put them on and reached for the tent's overhead light.

A cursory search of my tent - the kind you do when you don't want to find something - revealed my abused toothbrush. It lay dead on the floor. I bid it farewell, and vowed to deal with it in the morning. I convinced myself the giant rat had left my tent for greener pastures, turned off the light and attempted once more to sleep.

Within minutes of closing my eyes: Slurp. Chew. Slurp.

I aimed my flashlight at the sink just in time to see the giant rat again. It was now on the floor going at my toothbrush. Busted, it dropped my toothbrush and disappeared behind the wardrobe.

Deciding a giant toothbrush-eating rat in my tent was scarier than any wild animal outside it, I fled next door to where my mom and sister slept.

Neither wanted to share a bed with me, so they took turns explaining why I was overreacting, then suggested I go back to my tent.

I suggested they shove over and make room for me.

Instead, mom bet me $10 the rat was gone, and agreed to go with me to look. We searched the room, saving the wardrobe for last. Inside, we found nothing - "See! I told you! No rat!" - but one peek behind it revealed my furry foe.

I shared my sister's bed the rest of the week, and used my finger to brush my teeth. I let my mom keep the $10.

The second time a rat ate my toothbrush I was in El Nido, Palawan, in the Philippines, in a small, local hotel on the far end of town. My detached room on the beach was sparse and simple, with two giant front windows that faced the sea, and a front door that didn't lock.

Lying under the mosquito net in bed one night, I heard shuffling-scrambling across the roof, then a sort of squeaking, haven't-I-heard-that-noise-before sound from somewhere inside my room. Since I'd grown wiser and faster in the years since Rat Attack 1, I was out of bed, with lights on in seconds.

I got back in bed and pretended the mosquito net surrounding it was a protective shield from all evils. By some miracle, I fell back asleep.

In the morning when I walked into the bathroom, my toothbrush was on the floor. Instead of connecting "blur dashing out of room" to "toothbrush laying on floor," my brain said:

Your toothbrush fell off the edge of the sink. Waste no time thinking about how it fell off the sink, or why there are little marks on it. It was probably damaged in the fall. Pick it up, wash it off, and use it again quickly before you figure out none of this is true. Wait; was it wet before you ran it under the water? No, no...just brush.

That night in town I ran into a British man who had been staying in the room next to mine. I hadn't seen him for a few days, so I figured he'd left El Nido.

We got to chatting, and it turned out that he had not left El Nido - only our hotel, because he "could not longer abide the rats breaking into my room, and rummaging through my belongings." For him, the final straw had been when he awoke in the middle of the night to use the loo and found a rat eating his toothbrush.

Since Rat Attack 2, I've decided my Pollyannaish brain cannot be trusted when it comes to matters of dental hygiene. Now when I travel, unless my toothbrush is in my mouth, it stays sealed inside a toothbrush cover, preferably inside a plastic Ziploc bag.

Sorry, rats...toothbrush is mine. But the pizza is all yours. 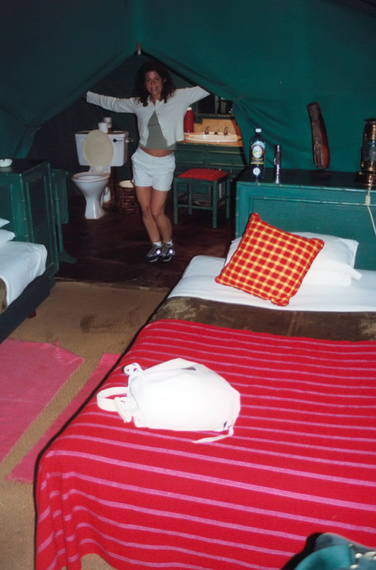