When I travel, I like to get down and dirty with the locals. So when I met Enrique with Mystery Peru tours and he told me that not only could he hook up a visit to the Quechua Indians that live on floating grass reed islands in the middle of Lake Titicaca, high in the Andes Mountains, but that I could spend a couple of days with them as a home stay... I jumped at the chance.

So a quick plane ride from Lima and a 2-hour car ride through some Incan ruins got me to Puno, the town on the edge of Lake Titicaca where I was to be picked up by boat to be taken to Uros. There are 50 islands that are made of floating reeds in Lake Titicaca and the people that live there live in peace and solitude (other than the boat loads of tourists that come every morning to buy their artisan crafts). I had no idea what to expect when I got there and it was like a fantasy world where everything was made out of grass and dyed neon colors. Even their boats and homes are made of the reeds from the lake. 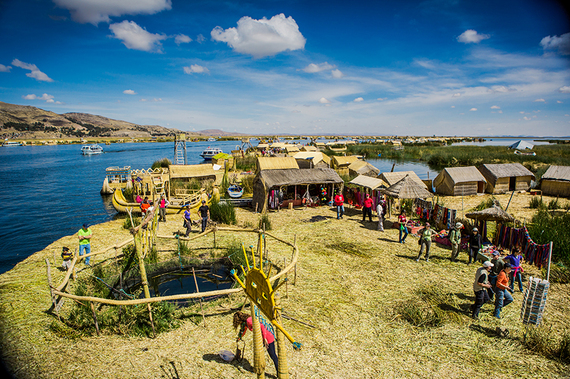 The Quechua people created these islands by hand by bringing local mud that floats and stacking layers of reeds on top of the mud and then attaching the floating mud blocks with wooden stakes, sort of like a jigsaw puzzle. There are two rows of islands with a "river" that goes through the islands. It's actually all just Lake Titicaca, but the constant water traffic between the islands makes it seem like a river. Usually 4-5 families live on one of these islands at any given time and if someone wants to move to another island, they literally cut it away and float and reattach it to another island! Insane, yet ingenious! 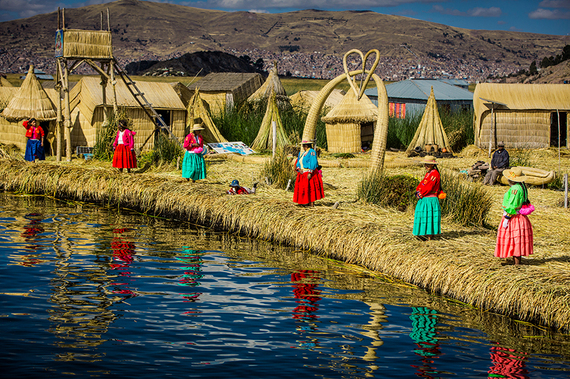 I was warmly greeted by the local women in their vibrantly woven skirts and braided hair with pom poms at the edge of their grass island, ready to welcome me into their family for a couple of days. This included dressing me in their thick cotton, colorful dresses and donning me with a knitted cap, signifying that I was single and not married. The married women have straw hats and I thought, how much easier this would make life at home if your relationship status was announced by the hat you wore! 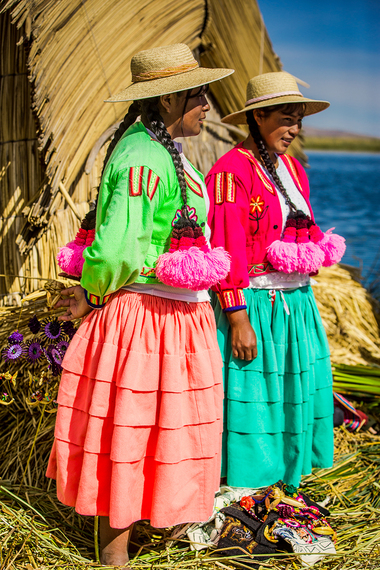 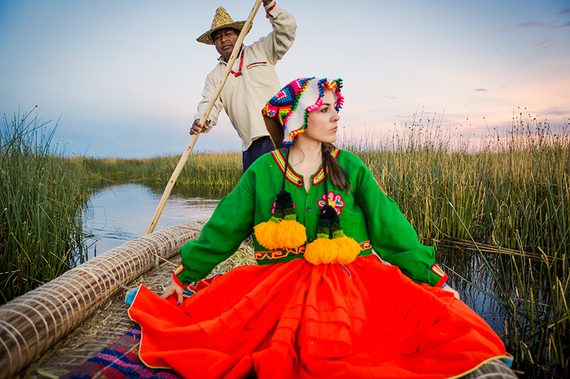 After I changed I was given the grand tour of the island, which shockingly had a full kitchen with solar panels perched on a grass pole, a "lounge" area with a swing set and chairs all made out of grass, a pond where they keep their fish that they catch, separate men's and women's bathrooms, and of course the family homes. For how poor and simple these people live, it is amazing that some have satellite TV and solar electricity! It was even more surreal to see their family cat wandering around the island and even a pet flamingo that chills at the family pond. 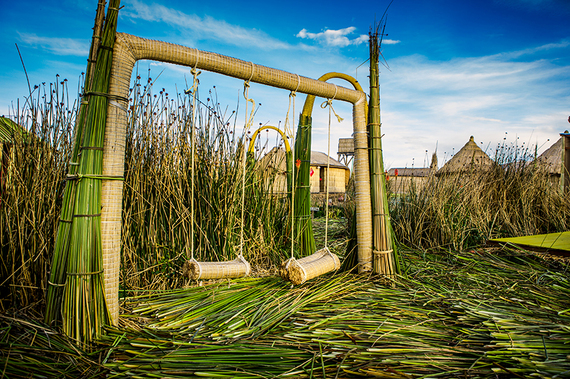 Here they do not speak Spanish, but an indigenous Quechuan language that is based on an ancient Incan language. So my Spanish only got me so far. So sign language and gestures had to communicate the rest for me. It is amazing that you can spend a couple of days with a family and figure out a way to communicate and to even joke with each other. After a while I almost forgot we didn't speak the same language. 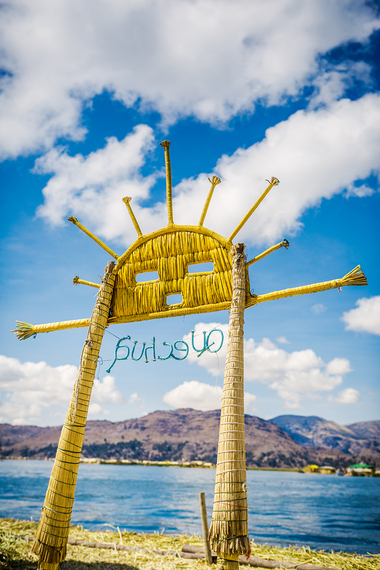 I spent my days watching the Quechua women hanging up their hand-made woven reed mobiles and arts and crafts to sell to tourists and boats passing by. The men were not around, because they are either out cutting grass reeds as their daily chores to prevent their island from sinking or to make things out of or they are knitting! It is such a funny sight, but in their Quechua culture, the men are actually in charge of knitting the clothes and toys for their children. 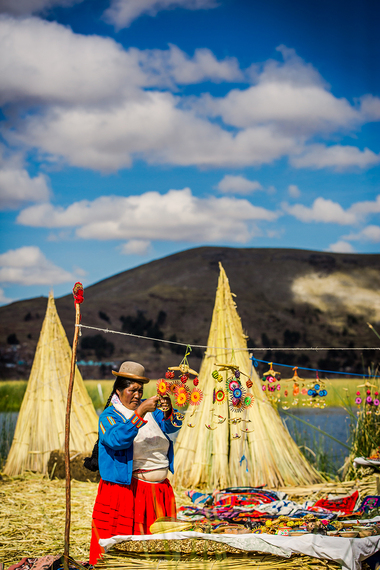 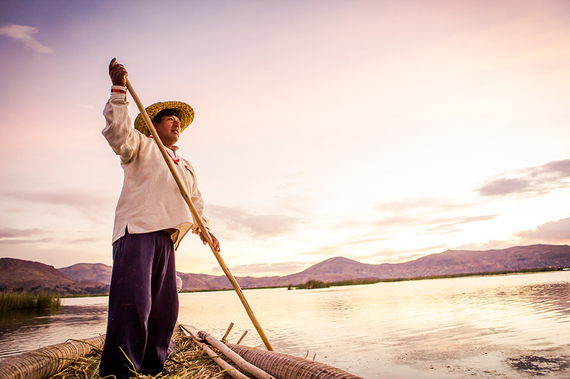 In the evening, I joined Victor, my Quechua "gondolier" and the patriarch of the island of Khantati where we stayed. He took me on a canoe ride in my local garb to see where they fish and how they cut the reeds for their island. I helped fish and pull up the nets and learned how they cut the grass and make their boats. The boat that I was being rowed in, Victor made by hand. These boats last 1 year and 8 months, he said, until they turn into a soggy mess. Everything eventually turns into a soggy mess, so it is a daily struggle to cut more reeds to maintain their homes and island. 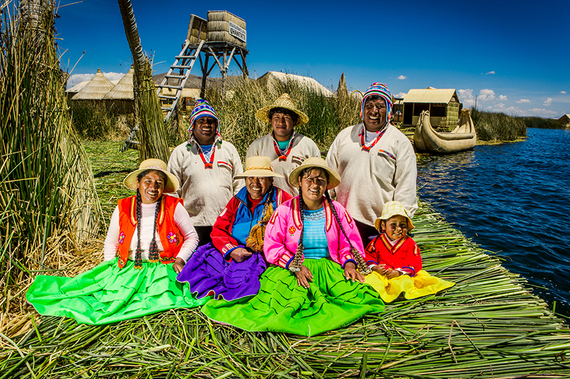 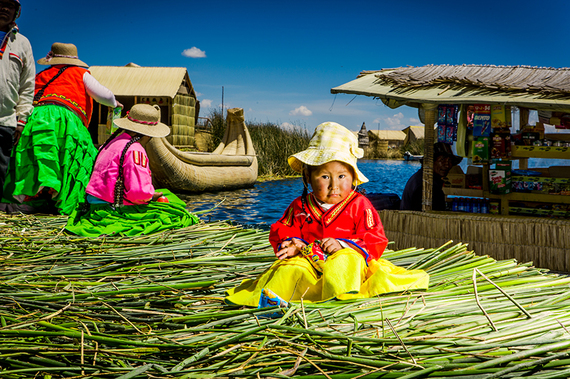 Victor and his family live simply and without many outside influences or conveniences. Their days are filled with cutting grass, making things out of grass, and feeding their families. Their only contact with the outside world is a small floating "convenience store" that comes to the island daily and the tourists who come to visit every other day. Their people have lived simply like this for hundreds of years and it made me realize that life is as simple as you want to make it. Our cell phones and texts and emails and mortgage payments...all are self-induced stresses and not necessary in everyone's lives. I spent two days floating, fishing, weaving, and just enjoying the simplicity of their lifestyle, something that is very foreign to me...relaxing. At night I slept in a comfortable bed in a grass hut with warm water bottles tucked in my woven blankets. Here, strangely enough, I felt at home in this remote place high in the Andes Mountains and I will always remember the hospitality of Victor and his family. 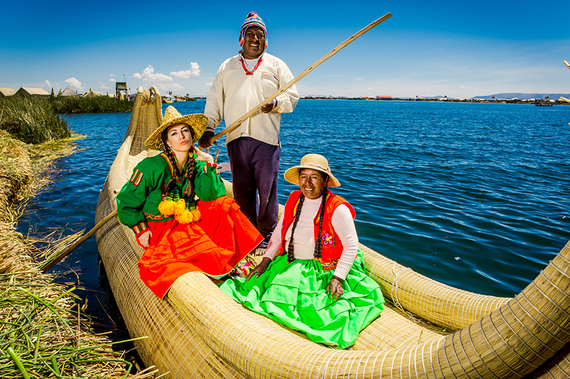