It's a scenario parents across the world have faced: their child imprints on an object, usually a stuffed toy or blanket, and that item disappears, causing sleepless nights and many a tear (until a convincing replacement is acquired). But what if the object your child takes to is one of a kind, or discontinued? This is the dilemma my husband and myself faced last fall, after leaving "Murphy," our son's beloved stuffed kitty, in a church while attending an out-of-state funeral. 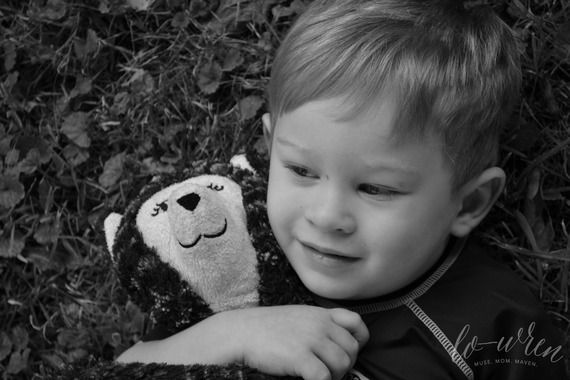 Thankfully, Murphy was located, and my mother-in-law was able to pick her up and overnight her back to us; it also helped that my son wasn't completely attached to Murphy at that point. After having that scare, I went online to search for a replacement Murphy, Murphy Two, if you will. My Internet search turned up frantic parents, all over the world, searching for this discontinued IKEA stuffed toy. Past eBay auctions showed people all over the world, capitalizing on other families' misfortunes, charging up to $150 for this $7.99 IKEA stuffed toy. I abandoned my search and vowed to be more mindful when taking Murphy out and about.

A little backstory is in order here, I suppose. Murphy, formerly known as "Churphy," was a stuffed cat given to me by my, then-fiancé, to comfort me while I spent a month in rehab 2010. Not only was Churphy a comforting token from my husband, she was named for our two cats, Chaucer and Murphy, who I would miss dearly while away. I saw the real Murphy for the last time, just before leaving for rehab, as she became very ill and was put to sleep while I was away. My Chaucer went into kidney failure almost two years to the day, and was put down when my son was 3 months old. Never would I have guessed that he would attach to my stuffed animal, with the many plush toys he received as a baby. It's fitting, in a way, and my husband and I found ourselves tearing up a bit when Declan chose Churphy, out of all of the other stuffed animals (almost as if our furry gals were looking over him in their own way).

When Declan was around 15 months old, he began asking to sleep with "Murphy," and we obliged, finding it dear. The fact that Declan named the cat "Murphy" was a source of competition between my husband and myself, as Murphy had been his cat, while Chaucer mine. After a couple of weeks of trying to correct Declan each time he said "Murphy," I gave up and went with it; after all, he was now claiming Churphy as his own.

Declan's attachment to Murphy has continued to grow since last fall, and Murphy now accompanies us on trips, often has a place at the dinner table, and shares secrets that only she and Declan know. Declan often says that he "loves Murphy," and it's enough to make your heart melt. Last week, I went in to check on Declan before heading into bed, and took a moment to take in my little boy and his cat. Declan now sleeps hugging Murphy, during naps and nighttime, and I had walked in to see my sweet little boy nuzzled in the neck of his stuffed cat. That sight was enough to set me on a mission to find a backup Murphy, Murphy Two, should anything ever happen to her. Murphy gets bathed weekly, and I say a little "prayer" each time I zip her into my lingerie bag to be washed. This is a cheap stuffed toy we're talking about, and Murphy is so well loved, that her stuffing is displaced, with a floppy neck from being tucked into the crook of Declan's arm each day and night. If we don't lose her, Murphy will surely soon come apart.

I put a call out on Facebook, and leveraged my blog's social media following, in an attempt to find a kind soul, who would be willing to sell me their cat, if they had one laying around. My readers posted active eBay listings for this IKEA cat, all overseas, and I felt the need to act on one (despite the price and the location), not knowing when or if we'd find another. One of the cats listed was located in the UK, with the seller only shipping within the country; thank goodness for family! I sent a quick email to my British cousin, explaining our predicament and asking for her help. My cousin was quick to respond, and having two sons herself, availed herself to the cause. Thankfully, the listing was a "Buy It Now" listing, and my cousin was able to purchase the cat for us on the spot. Royal Mail moves at lightning speed, and I'm pleased to announce that Murphy Two is currently traveling across the ocean to make her new home with us. Provided her journey is successful, we'll have averted a potential 'crisis', and be in good shape lest the original Murphy decides to pull a disappearing act. When all was said an done, we spent nearly $100 to buy a backup from Great Britain, but you really can't put a price on something that is so dear to your little one; I know my husband and myself will sleep well, once Murphy Two arrives!

(If you're curious, perform an Internet search for: IKEA Gosig Katt, the results are sure to entertain.)

More:
Parentsikea
Newsletter Sign Up
Raise the kind of person you'd like to know
Subscribe to our parenting newsletter.
Successfully Subscribed!
Realness delivered to your inbox