September 15, 1963. A car travels North from Valle de Bravo, Mexico toward the border of Laredo, Texas. Artist John Henry Waddell, age 42, and his family have spent the past two and half years living in Mexico.

As John's wife, artist Ruth Holland Waddell remembers it. "John said, ' Let's turn on the radio and see what's new in the Unites States.' That is when we heard about the bombing of the 16th Street Baptist Church in Birmingham, Alabama."
"Is there a war?" asks their youngest son William, age 9.

The radio newscast went on to report that four little girls attending Sunday school had perished in the blast. 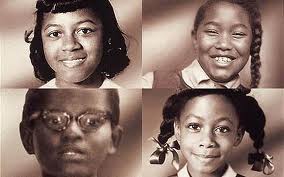 Upon returning home to Tempe, Arizona, Waddell immediately went into his studio and began moving things around - making way for something. Feeling something had to be done, to be said. As he was a sculptor, it would be through his art.

Over the next 15 months, 19 different women from the surrounding community came to pose for Waddell and his sculptural eulogy to the four little black girls - the work that would come to be titled, "That Which Might Have Been, Birmingham, 1963"
The only figure that was started and finished with the same model was the West facing figure - like most of the others, Ernestine Moore had never modeled before.
"Word got around," said Ernestine in the 2008 film "Rising" by Marlo Bendau. "My mother-in-law said, 'I don't know what you expect to get out of this.' But I felt it was very important to stick with John and his idea. I did stick with it. I'm glad I did."

At the funeral of three of the girls (one family preferred to hold a private ceremony), Martin Luther King spoke ;

"These children -- unoffending, innocent and beautiful -- were the victims of one of the most vicious and tragic crimes ever perpetrated against humanity."

"I drove Cynthia to Sunday school and went to get some gasoline in my car." "I was just a few blocks away when I heard the explosion." Claude A. Wesley father of Cynthia

"...someone told me I better go to the hospital. There they asked me what she was wearing. I told them a little class ring. They pulled out her hand and I saw the ring. Then I saw her black patent leather shoes and white socks..." Claude A. Wesley father of Cynthia

Justice would come slowly for the families of the victims, in part because FBI Director J. Edgar Hoover refused to let his agents share the results of their investigation with State or federal prosecutors.

Bobby Frank Cherry, born June 20, 1930, was convicted in May of 2002. Two years later, at age 74, he died in jail. In the Marines Cherry had become a demolition expert and later, a violent white supremacist.

A fourth man, Herman Frank Cash, who was also linked to the bombing, died in 1994
--untried

All four men belonged to the Ku Klux Klan.

50 years later, on September 10, 2013, the Senate would posthumously honor the four little girls killed in Birmingham, with the Congressional Gold Medal of Honor.

But back in 1963, Birmingham, Alabama, where justice was but a dream, a decision was made by the congregation of the 16th Street Baptist Church - and by the parents of the for slain girls.

They would retaliate with peace.

"Even in war we don't bomb hospitals and churches. But I cannot help but believe that some good will come of this. If not, her death will have been in vain." Mrs. McNair mother of Denise

The horror of the event, and the spirit of the four girls killed would inspire poetry, songs, films and fiction.

"The stained glass windows of the 16th Street Baptist Church were blown out of their frames in today's explosion. The one remaining window, which was damaged, showed Jesus leading little children." New York Times Sept. 16 1963

In Tempe, Arizona Waddell finished his own contribution to this universal eulogy to the four little girls and the ongoing quest to honor them ; "That Which Might Have Been, Birmingham, 1963"
"The total group stands as a prayer of atonement and symbolizes the unfulfilled maturity of the four Black girls killed in the church bombing in Birmingham, Alabama on September 15, 1963. The total group implies nobility, perseverance and hope." Wrote Waddell.

"The negative space in the center of the four figures implies the base of a vortex reaching heavenward, and suggests the need and desire for supernatural aid. On the raised hand of the figure facing northward is written the word "prayer". The overtone of the total group is earnest hope for understanding among humankind."

The sculpture was purchased by anonymous patrons and donated to The Unitarian Church in Phoenix, Arizona. At the dedication Waddell spoke ;

"From a world torn asunder by artificial and meaningless barriers, where differences create misunderstanding and fear, we look to a future of harmony and peace, where differences quicken interest, reveal beauty, and create a desire to understand. To the achievement of such a world, we dedicate this art, keeping in memory the lives of those innocents memorialized herein."

Around 1992, just before the 30 year anniversary of the bombing, Reverend Christopher M. Hamlin from the 16th Street Baptist Church in Birmingham, led a campaign to bring the sculptures to Birmingham. Hamlin traveled to Arizona to see the work and meet the artist. John and Ruth Waddell used personal funds to recast the work. The Waddell's traveled to Birmingham and there also befriended Christopher and Maxine McNair, parents of slain Denise.

Though there were many supporters of the work and a great effort was made to "bring the girls home", as one proponent said, this second casting did not travel to Birmingham. Shortly thereafter, "That Which Might Have Been, Birmingham, 1963" was welcomed at the George Washington Carver Museum and Cultural Center in Phoenix, Arizona.

In both the Carver location and at the Unitarian Church, the four sculptures are placed facing North, South, East and West, respectively.

"The sculpture is a memorial to Addie Mae (Collins), Denise (McNair), Carole (Robertson), and Cynthia (Wesley).
But it does not represent them. However, it reminds the onlooker that these innocent children would have grown to adulthood in all of the genetic richness of individual uniqueness. A uniqueness that when allowed to flower, makes for the best of worlds. For me the work stands as an act of atonement. Each figure has a meaning that relates to the health of the world. The total sculpture allows the onlooker to become a part of the mystery, the pain and the healing."

NORTHWARD FACING FIGURE: This figure is the most youthful and reflects hope and optimism in the face of adversity. On the upraised hand of this figure is written the word, "prayer." 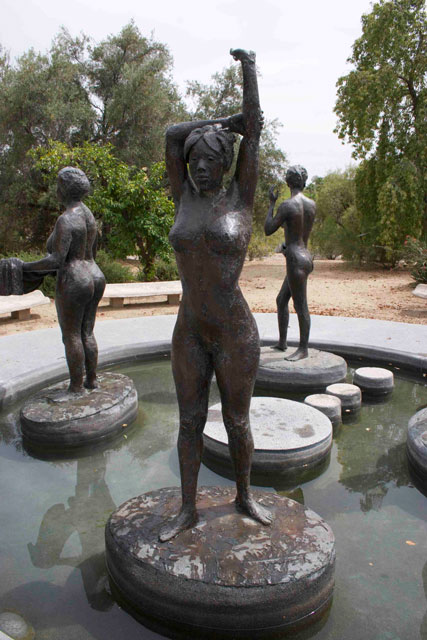 SOUTHWARD FACING FIGURE: This figure is in the act of turning--turning away, or toward. 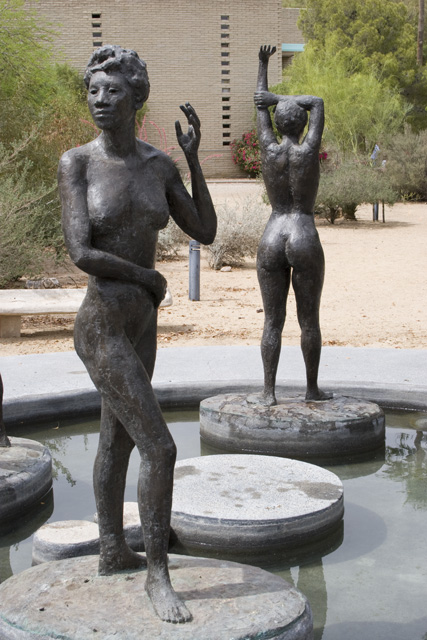 EASTWARD FACING FIGURE: "This, the most maternal of the group, implies the maturity of fulfilled womanhood and motherhood. The upraised swaddling cloth bears the imprint which symbolizes the progeny that will never be born." 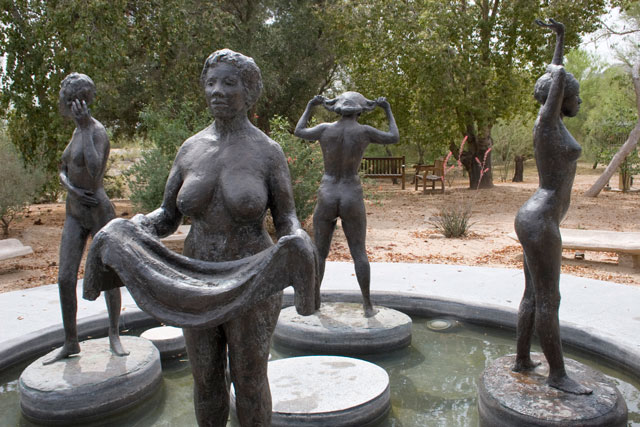 WESTWARD FACING FIGURE: This figure is in placed contemplation of death and acceptance of all that is and will come. Acceptance is symbolized by the shell-like quality of the gesture of the figure." 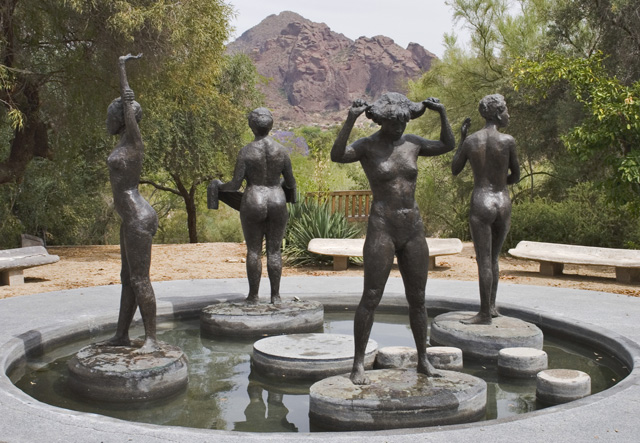 At age 92, John Henry Waddell and his wife Ruth Holland Waddell live and work near Sedona, Arizona. He still traverses the steps to his studio daily, to examine human nature and social unrest through his sculptural work. In 2008 he completed "Rising" an elegy to those who lost their lives on September 11, 2001. 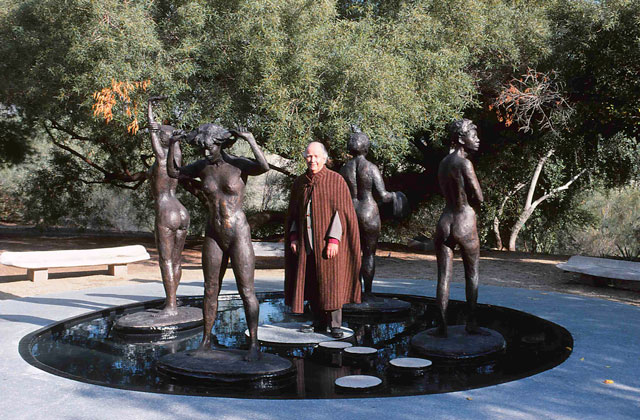