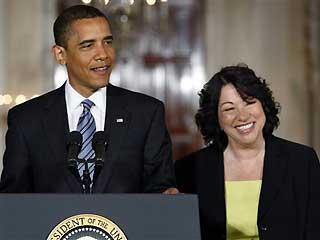 I say this as a member of the Hispanic demographic, which as you know, is one of the 13,000 groups that Republicans are supposedly trying to win back. I also say it as an American citizen with common sense, which is one of the groups the GOP lost a long time ago.

Yes, we know that the Supreme Court nominee has one controversial ruling (the "reverse-discrimination" firefighter case) and that she mouthed off about Latinas making better decisions than white men. But Newt Gingrich and Rush Limbaugh's claims that she's a closet bigot are simply not resonating. And unless pictures emerge of Sotomayor wearing a t-shirt saying, "I hate white people," that isn't going to change.

To my Republican friends, I say back off while you can. The first reason you can't stop her is a factual one.

In addition, she offers a well-known compelling story (The Bronx, diabetes, "Perry Mason," and so on). Sotomayor had to earn her way into the Ivy League, where she excelled. She wasn't some rich kid who got in because of family connections and then barely squeaked by with mediocre grades (ahem... where was I?).

This is a chance for Republicans to stop rebuking their own philosophy. You know the one I'm talking about: "Anyone can pull themselves up by their bootstraps, and not let their circumstances keep them back."

Yet whenever someone actually does that - like President Clinton, President Obama, and Sotomayor - they wind up despised in conservative circles. Then the GOP goes with the son of a president or the son of an admiral to carry their standard. In truth, the last Republican I recall who actually came from dirt was Alberto Gonzalez, and we all (especially mortified Latinos) know how that one turned out.

Republicans should be thrilled. Here is a woman who actually did what they claim everyone can do: Raise up to greatness from lower-class origins. Weirdly enough, they don't seem pleased see her.

Mike Huckabee couldn't even be bothered to know her name.

In any case, the second reason for Republicans to cool it is a purely political one.

Do they really want to piss off the fastest-growing block of voters, who by the way, just rejected their presidential candidate by a factor of two to one? Is telling the first Latina ever nominated for the Supreme Court that she's not good enough truly the message they want to send to Hispanics like me?

And I'm not even talking about the many women who would be furious, all of whom would rightly ask, "So Clarence Thomas is ok up there, but not another woman?"

Speaking of Thomas, I find it interesting that Republicans talk a great game about picking only the best and ignoring racial considerations. Eighteen years ago, Thomas was considered by many to be a lightweight who only got in because Thurgood Marshall was leaving, and Republicans wanted credit for appointing an African American to replace him. They denied this, of course, and said Thomas would go on to greatness. Two decades later, we're still waiting for the guy to ask a question, author a memorable opinion, or be anything other than Antonin Scalia's sidekick.

In any case, people like George Will come across as oblivious when they denounce "identity politics," as if John Roberts' upbringing as a straight white male has had no impact on his tendency to vote for the establishment.

Still, if all these reasons aren't enough, let's look at the basic math.

Democrats have 59 votes, and may even have a filibuster-proof 60 if the Minnesota mess ever gets figured out. Many of the Republican Senators are moderates who are not terrified of a left-center Latina. So what chance do the 20 to 30 hard-right conservatives have to stop her confirmation? The numbers just aren't there.

But let's say that Republicans derail the Sotomayor nomination. Then what happens?

Well, Obama just picks someone else they despise. And eventually, this person gets confirmed, giving us the same court we have today. If anything, such a court might be even more liberal than Sotomayor would have made it. Oh, and there's also a whole lot of angry Hispanic and female voters now.

But go ahead, Republicans, don't listen to me. You never have before.