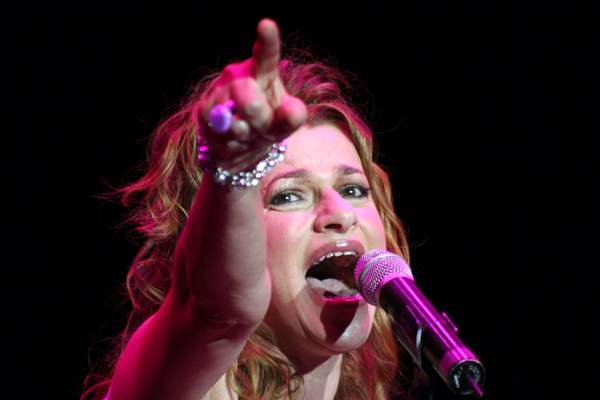 Bryan Safi is a writer for infoMania and host of "That's Gay."

Next Thursday, I'm debuting a That's Gay live show at the Out Loud Comedy Festival in San Francisco! But enough about me and how you should buy tickets to see me here -- and on to someone far more interesting.

I had the chance to chat with the brilliant and hilarious Sandra Bernhard, who is headlining the Out Loud Comedy Festival in San Francisco Saturday, October 9th at the Castro.

We talked about her time on Roseanne, those unforgettable Letterman interviews, the nutty Christine O'Donnell, and why I would absolutely watch her reality show.

Q: You were kind of a big part of my household when I was younger. I told my Mom I was interviewing you and she goes, "Is that the one like Courtney Love?"
A: Really?! Oh my God. That's hysterical.

Q: I told her you've both sung songs by Hole but that's where it ended.
A: For sure. Oh my God. For sure.

Q: So what are you planning to do at Out Loud?
A: Just 45 minutes of my music and my comedy. It'll cover everything from contemporary pop culture to my personal life to politics and everything in between.

Q: I saw you perform in Los Angeles once. And I remember that Michelle Lee from Knots Landing was in the audience. She was tipsy and you made some snarky remark to her.
A: Tipsy Lee! I'm gonna see Michelle tonight. We're going to see Liza Minnelli.

Q: My segment in That's Gay talks about gay issues and stereotypes and the way the media looks at them. So I want to know who you're loving in the media right now.
A: I love Rachel Maddow, I really like Amy Poehler. I'm a big fan of that show Mad Men. I don't like all the hype around it, but I think it's a very engaging show. I don't watch much TV in general. Friday Night Lights is another one of my favorite shows.

Q: I've still never seen it.
A: You have to get it on DVD! And I love Damages. I don't understand why all these great shows get overlooked. It doesn't make any sense to me. I've been Twittering a lot too. I Twitter with Rosanne Cash, I'm going to tea over there this afternoon. I'll tell you who I love -- Stephen Colbert and Jon Stewart. Especially Stephen Colbert. I think he's fearless. I love how he plays it.

Q: Is reality TV something you've ever been interested in doing? I imagine you've been approached.
It's interesting. Fifteen years ago, my friend Jhoni Marchinko -- who ended up becoming the show runner for Will & Grace -- pitched to HBO "A Day in the Life of Sandra Bernhard."

Q: OH MY GOD THAT WOULD BE SO GOOD.
A: The people at HBO said, "We don't get it." It was right before it all kind of exploded. And so it never happened. And then of course, y'know, Curb Your Enthusiasm and all these shows [came on]. But no, I would never wanna do a show that's strictly maudlin and invaded my personal life and my home. I would never do that.

Q: What about on Bravo?
A: No, no, no, no. That's not for Sandy. I don't see the reality thing happening now. I don't think there's any room left to do anything inventive. They don't want inventive. They wanna be hit over the head with this stuff. And, you know that's not where I come from.

Q: When you came out on Roseanne, my parents wanted us to stop watching it. That must have been a huge moment - being one of the first recurring lesbian characters on a hit show.
A: Don't forget I started out married to Tom Arnold. That's what was sort of really funny about it. That was kind of the whole point, that he had driven me to it. So it wasn't kind of like you were getting hit over the head with it -- like, "We gotta throw a gay character on the show." It was much more subtle.

Q: I remember the controversy over that kiss with Morgan Fairchild so well.
A: That kiss wasn't consummated. ABC wouldn't let us have the kiss. Just as we were starting to kiss, the camera cuts.

Q: I just remember being excited about it.
A: Yeah, it's an interesting story. But nobody took [the lesbian thing] seriously on that show. Roseanne just shoots from the hip. She just goes for it. Nothing was ever serious on that show. Nobody was like, "Oh my god this is the most incredible thing." She came up with funny ideas and things that hadn't been talked about and she did it. That's why to me it was so much more effective.

Q: Have you ever been proud of offending a particular person?
A: Before the last election, I spoke out a lot about Sarah Palin. I got harassed about that a lot. I'm glad I did. I'm glad I stood up. I can't believe she's still in the eye of the storm. I find that shocking. Most of what I've done over the years is take apart pop culture. I'm never out to get anybody. But that was a specific time. We're still in a specific time of people being incredibly hateful and stupid and totally not in touch with what reality is. I just think we're in a very weird place.

Q: This is a really strange time. Kind of terrifying. People are pissed.
A: Yes. There's a lot of people who don't work and have a lot of time on their hands. They're frustrated. They don't like that there's a black president. They're freaked out by the idea of gay people getting married. It's too much for them. So they're just freaking out.

Q: And people take comfort in that, too -- in freaking out.
A: Yes. And then having other people to freak out with.

Q: I'm doing a show at Out Loud called the "State of the (Super Gay) Union." I'm going to rattle off some current events and I'd love your thoughts on them. Ground Zero Mosque.
A: It's absurd. Of course they should be allowed to build it.

Q: The Real Housewives.
A: I put blinders on around those chicks. They drive me crazy.

Q: It's used a fair amount in hip-hop. An example would be, "Suck a dick. No homo." Meaning, don't take that in a gay way.
A: Like a disclaimer?

Q: Exactly.
A: God. I don't know about that. I guess I missed that one.

Q: My two favorite things are watching all of your old Letterman videos on YouTube and also watching Paris Is Burning. What does that mean?
A: They're both pretty outrageous and unedited and uncensored. When I used to do Letterman, it was a different time. You could do stuff you can't do now.

Q: Are you friendly with Letterman?
A: No! He wasn't friendly with me. He totally turned off to me and didn't have me on anymore. I don't know. I have no idea why. Nothing happened. He moved to another network, and times changed. Maybe that was part of it. Maybe they didn't want people to come on and use the place as an entertainment medium. It doesn't make sense at all.

Q: What I loved about guests like you on those shows is you were just there to be interesting and funny and have a point of view and not to promote some shitty movie that nobody wants to see.
A: That's right. Exactly. And that's what television should be. It's a total bummer now.

Get tickets to the first ever live version of my segment on Thursday, October 7, at San Francisco's Out Loud Comedy Festival.