My 2-and a half year-old daughter sang these words as she skipped, then jogged toward the man walking in front of us. I watched the situation unfolding, thinking about how happy any father would be to see joy on his daughter's face at the mere sight of him.

The problem was this guy was not her dad. He was a random dude on a crowded Brooklyn street.

"Maxine. That's not your dad."

"Punkin', it's not. We've talked about this before; you have two moms. Remember?"

I didn't have time to talk to her about the complexities of our family structure because she was rapidly approaching a stranger, and upon closer inspection, he looked insane. He kind of had pants on. To make up for his partial pants, he wore somewhere in the neighborhood of 57 shirts. One would think that when picking a fake dad, my daughter would choose someone that liked to shower.

Just as Maxine was about to grab his hand, my wife and I ran interference, scooping her up and turning the moment into a bouncing and throwing game, while simultaneously mouthing "sorry" to the quite possibly homeless guy.

This whole "Daddy" thing started 6 months before. We were driving to Ikea, like you do, and Maxine was sitting in the backseat enjoying the view. That's when she saw a man out the car window, pointed and yelled, "Hey! That's my daddy." 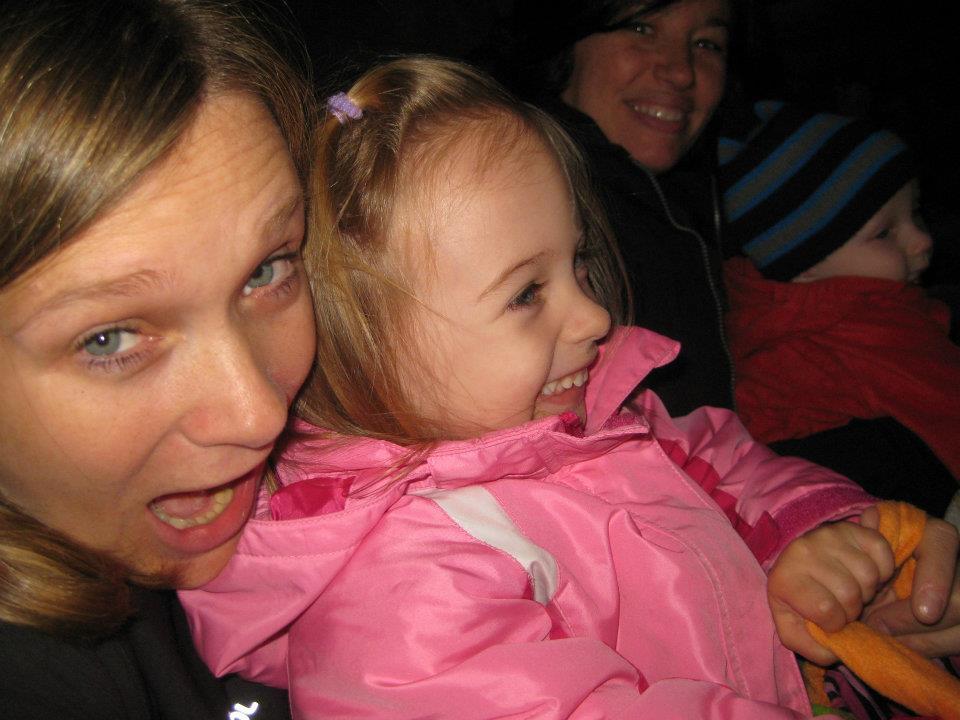 I'll admit, I was startled, but I figured we could clear this whole situation up with a quick talk about how there are all different types of families in the world. There are single dads. There are single moms. Some kids live with their grandparents. You get the point.

I turned around to the backseat, looked Maxine in the eye, because that's what all the dumb parenting blogs tell me to do when talking about something important, then blurted out a quick sentence about all the different types of families. Then I yelled, "Oh, look, an ice cream truck!"

Ice cream bought me the time I needed to go home, google the crap out of the situation and then figure out our next step.

Thank God for the Internet. You can experience what feels like the most personal or unique situation, yet when you look it up, you realize that someone else has not only searched this same thing, but a group of accredited experts have written an article about it.

It reminds me of the time I was talking to a friend and I mentioned that I occasionally get these foul smelling white globule thingies stuck in the back of my throat and, oh yeah, sometimes when I sneeze, they fly out. Turned out she had the same problem and I was all, "What? You too?" So, of course the next thing I did was google "white, smelly globules" and found out that it's an actual thing called "tonsil stones."

Here's what I learned: I'm not alone, and also tonsil stones are super gross and you never want to see pictures or diagrams of them.

I can see you opening up another browser page. I wouldn't.

I clicked and clacked on the keyboard searching "two moms," "sperm donor" and "talking to your kids about sperm donor." Low and behold, I found, quite possibly, the most specific and perfect book called My Family. It was written by a donor network in London, and they had options for almost any situation you could imagine; two dads with a rented uterus, a mom married to a dad who's sperm is broken or even a gay dad and a pack of lesbians on a commune. I picked out the book that was for two women who bought sperm on the Internet as easy as buying a bathing suit from Lands End. I popped that bad boy into my cart and checked express shipping.

This book was going to fix everything.

I'm not saying we had anything to fix. Quite the opposite; our daughter was the sweetest, kindest kid around, so much so that we mistakenly thought it had something to do with our extremely awesome parenting skills. A year from now, we would have a 2nd child named Henry who would destroy our arrogance (and our confidence) by not just resisting, but defying any and all attempts at being soothed, scheduled or diverted away from his original intention. But, right now, Henry was merely a glint in our sperm bank's eye, so we were smug in our greatness. I knew how to handle this situation.

My wife, Mary, did not feel the same as me, though. From the moment we started talking about having kids, Mary expressed (and by expressed I mean panicked about, loudly) concerns over whether or not our kids would hate us for being lesbos. Actually, she said gay, but I feel like lesbos is the kind of word an angry teenage girl would use.

To me, this wasn't really a problem. I knew that at some point, our kids would hate us. It may be because they don't have a dad, but it could just as easily be because we are chubby, or loud or because we insist on taking drug store reading glasses out of our backpacks every time there is even a single line of text in front of us.

Any and all of these things will eventually embarrass our kids, and they'll hate us -- just like we did with our parents. After my parent's divorce, when my dad would pick me up for our sometimes biweekly four-hour outings, I would suggest we go to a movie and during the movie I would sit 10 to 15 rows in front of him, because I didn't want anyone to see me sitting with him. After the movie, over pizza, I would talk to him, if and only if no one from my school was at the Pizza Hut.

This is just what kids do.

At some point I expected us to have to deal with the fact that we lacked a dad, but I thought it would be in 10 years when Maxine was 13 and slams as many doors as she now has in princess dresses... which is like a lot, yo.

But, the fact that Maxine was now walking up to random men on the street clearly meant we had to step up our game.

"Oh, hey, Maxine. Here's a new book called My Family. It's all about us! Ooh, this is going to be a good one!"

She smiled and clapped, excited to see that our family story was in print with colorful drawings that came from kids her age.

I think I was almost as excited as Maxine because I was parenting goddamnit. Look at me go. But, on page four I had the sudden realization that I was way more uncomfortable with the content of this book than Maxine was. I forged ahead, but when I got to the part about how some nice man gave us his sperm because you need both sperm from a man and an egg from a woman to make a baby, I had to stop myself from closing the book and yelling, "The end!"

Suddenly, my head was filled with vivid images of Maxine running around her Russian brownstone daycare yelling, "My Mommies borrowed sperm from a nice man so I could be born!"

I could just see the judgment in the daycare lady's eyes.

That's when it hit me. I had shame.

I am not saying I wished I were straight; I was comfortable with the fact that I had fallen in love with a woman, and we needed someone else's sperm. But, I didn't like that I was feeling a bright spotlight shining on our differences. The light was pointing at how we had used a scientific process to have our kid, and that was not how most people made babies. As I read the book, I couldn't help but think that not everyone was going to view our child as a modern day miracle.
I suddenly felt open to ridicule. Mean girls on the playground are going to make fun of my daughter and I could already feel the side-eye-stares coming from their mean-girl moms.

I'm not good with these types of situations -- I'm reminded of high school -- a time where I was made fun of mercilessly for my tomboy ways. Just underneath my classmate's taunts, I could hear the word, "dyke" being screamed. There was absolutely nothing that I could say to defend myself because we all knew it was true.

I hated this feeling. I thought I was past this. I thought I head dealt with my internalized homophobia when I came out years before.

Apparently, not so much.

So, I decided to just keep reading the book.

Every night, I put it in rotation between Good Night Moon and our other family favorite, I Like it When. We didn't debate the points of the story or even chat about it, but I read it and reread it every night before moving on to the rest of our nightly routine.

Over time, this book reminded me of the love that Mary and I had and how much we wanted to have a family -- how much we wanted to raise good people that would go out into the world and contribute. It reminded me that we made our kid of love just like everyone else. It reminded me that we are a loving and supportive family. And, over time, I found that my shame seemed to dissipate. Oddly enough, our daughter also stopped walking up to random men on the street and declaring that they were her father.

Two years later, I arrived at our local school to pick up my daughter from Pre-k. When I walked into the classroom, I saw Maxine happily playing Magna-Tiles with another girl. Her little friend saw me first and speed- walked over.

I bent over to the little girl.

She placed her hands on her hips pointedly and said, "Does Maxine really have two moms?" Her tone wasn't mean, but it was incredulous; as if two moms was mathematically impossible.

I looked the little girl in the eye and said, "Of course she does."

The little girl made a "huh, that's weird" face, shrugged her shoulders and walked back to the play area.

Maxine smiled, ear-to-ear, like she was the most proud girl in the world because she was different, special even and said, "I told you I had two moms." And then she gave the girl a hug and skipped over to me so we could head home.

So, I'm not saying that when Maxine turns 13 she won't hate us, but I am saying we'll deal with it. For now, the uniqueness (not differentness) of our family has become part of the lexicon of our household. It's just another descriptor that says who we are, like we live in Brooklyn, or we have a black cat named Lucy.

And while I no longer think we're the most amazing parents in the world, I do think we must be doing something right because last week, as we were leaving our building, our porter began telling us a story about his father, and my son, Henry, without emotion, or reaction said, "I don't have a dad." He then raised his hand and high fived the porter just like he does every other morning on his way to school.