Mark Twain remains the most frequently quoted American author, which means he is also the most frequently misquoted author. We see these misattributed quotes on Facebook, in blogs and tweets, and even in print. Dozens of quote sites on the Internet continue to post them despite noble attempts to set the record straight.

But, there is hope. One site, TwainQuotes.com, edited by Barbara Schmidt, goes to the trouble of verifying quotes as authentic and even alphabetizes them by topic. The Mark Twain Project lets researchers peruse Twain's letters and autobiography using keyword searches to track down sources. The University of Virginia hosts a site that also allows keyword searches of many of Twain's works. And Twain scholar R. Kent Rasmussen has published a thoroughly researched and reliable source, The Quotable Mark Twain.

When a good Mark Twain quote is needed to punch up a paper or spice up a speech, it is possible to verify it with a credible source.

On the popular television series, The Office, boss Michael Scott's go-to expression was, "That's what she said." Although several T-shirt websites claim Mark Twain said it first, there is no evidence he did, and certainly not in the context implied by Steve Carrell's Michael Scott. Technically, it can be argued that one of Twain's characters said it in "Ten Thousand Years Among the Microbes" or in "Those Blasted Children" or as "That is what she said" in The Mysterious Stranger -- but, again, not in the context suggested.

Following are 20 quotes frequently misattributed to Twain. No one can prove he ever spoke them, nor is there any evidence he wrote them. Fact-checking has never been easier, so why not verify before repeating? Remember -- friends don't let friends misquote Mark Twain.

A few examples of quotes Mark Twain DID NOT say:

1. "I wrote a long letter because I didn't have time to write a short one." (The actual sentiment was expressed by French philosopher Blaise Pascal.)

2. "There are three kinds of lies: lies, damned lies, and statistics." (Even Twain has misattributed. He originally credited Disraeli with this quote, but it appears to have been said by Leonard H. Courtney.)

3. "I am not an American. I am the American." (Twain was actually quoting his friend Frank Fuller.)

6. "It is better to keep your mouth shut and appear stupid than to open it and remove all doubt."

7. "The secret of getting ahead is getting started."

8. "I have never let my schooling interfere with my education."

11. "The coldest winter I ever saw was the summer I spent in San Francisco."

12. "Whiskey is for drinking; water is for fighting over."

13. "When I was a boy of 14, my father was so ignorant I could hardly stand to have the old man around. But when I got to 21, I was astonished at how much the old man had learned in seven years."

14. "Be careful of reading medical magazines; you might die of a misprint."

15. "Never pick a fight with someone who buys his ink by the barrel."

17. "You should never trust a man who has only one way to spell a word."

18. "A lie can travel halfway around the world while the truth is still putting on its shoes."

19. "A banker is a fellow who lends you his umbrella when the sun is shining and wants it back the minute it begins to rain."

And perhaps the most commonly misattributed quote is this one that has been making the rounds on the Internet since the mid-1990s and has even been included in numerous books:

"Twenty years from now you will be more disappointed by the things that you didn't do than by the ones you did do. So throw off the bowlines. Sail away from the safe harbor. Catch the trade winds in your sails. Explore. Dream. Discover."

Mark Twain did NOT say that.

The quote belongs to H. Jackson Brown's mother. See page 13 in Brown's 1991 book: P.S. I Love You: When Mom Wrote, She Always Saved the Best for Last.

Sadly, Google search results for "Mark Twain quotes" list popular sites that misattribute hundreds of quotes -- no sources provided. In all matters, my dad used to say, "You have to consider the source." Agreed. Verify veracity.

As Mark Twain did say in Following the Equator (1897), "It is my belief that nearly any invented quotation, played with confidence, stands a good chance to deceive."

That's what he said. 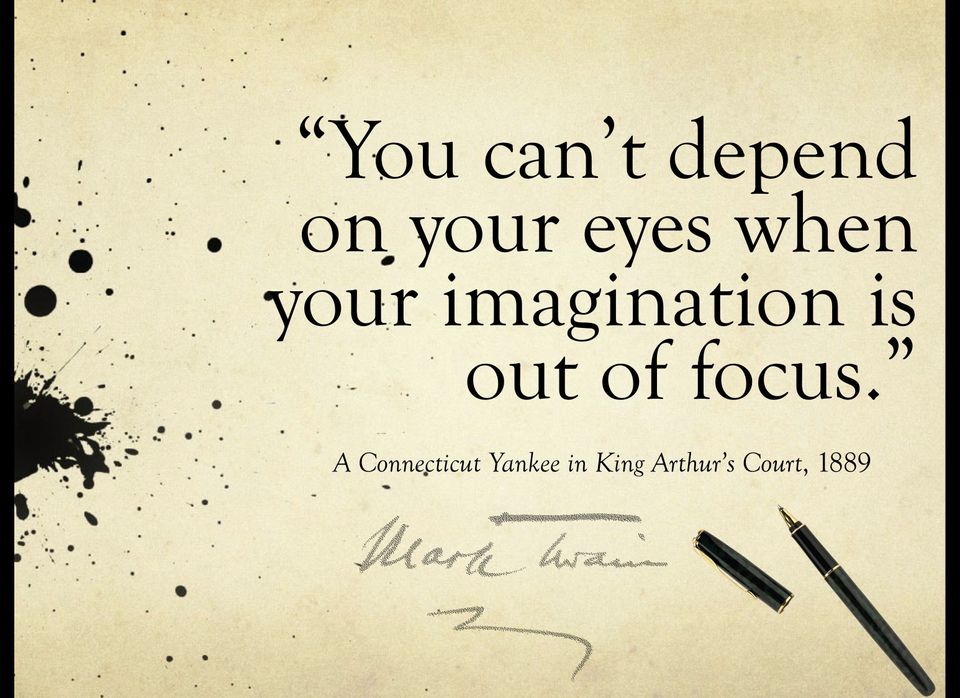