Of course, the term 'hearing people' only really exists in the deaf world, because hearing folk generally see themselves as being, simply, 'people.' But to us Deafies, there's something distinctive about them. We know there are things that only they would do.

Statistics show that five in six people are hearing. That's a whopping 50 million people in the UK, and nearly six billion people worldwide. They're literally everywhere.

So, listed for convenience, here are the 10 things we'd rather hearing people did a whole lot less -- their very most annoying habits.

Apologies in advance for the low-fi sketches -- I got a bit carried away.

1. Overhearing things they aren't even listening to 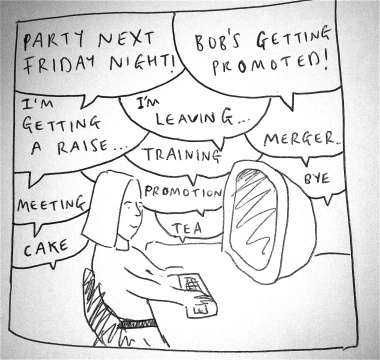 Whether there's an office meeting, a social gathering or a major news event, you can bet your bottom dollar that the last person to find out will be the deaf employee.

"But everyone knew about the party!" their colleague will later say, showing a remarkable lack of awareness of how he even found out in the first place -- when he overheard the boss talking to the secretary while he was typing at his computer.

Hearing people listen when they're not even trying to. They even learn things from the information they overhear. This phenomenon is called incidental learning.

Learning without even meaning to? That's just ANNOYING. 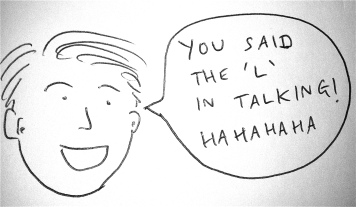 To hearing people, it seems crazy that a grown man, 31 years of age, say, maybe even the Editor of a website, could pronounce a word incorrectly.

So, as we mispronounce a word, they think the appropriate response is to laugh (as Callum Fox wrote about here) or correct us (as I wrote about in this article).

Forgetting, of course, that since we don't hear so well, we may not have heard quite how a word should sound.

It's embarrassing, but we can't help it.

So don't correct us. Let it slide.

We did the speech therapy. It helped, but clearly, it didn't fully work.

If a deaf person thinks I've put on weight, they tell me. 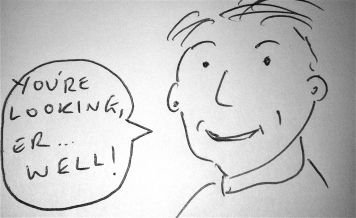 There's no place to hide with sign language. They point at me, puff out their cheeks, then their hands track a big round shape where their tummy is.

I can see just how fat I've become. Despite the initial awkwardness, I know in that moment that I need to cut down on the pies and get myself down the gym.

But if a hearing person thinks I've become a bit thick of tum, they do everything they can to hide it.

They look me up and down, do a few mental calculations, and then say "You're looking well."

Looking well? What they mean is, "You've put on a few pounds mate." You know it, and they know it.

So why can't they say it?

More on being direct: The sign of the fat man http://www.bbc.co.uk/ouch/features/the-sign-of-the-fat-man.shtml 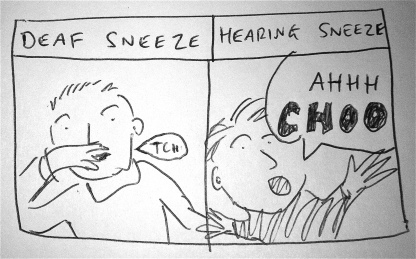 Perhaps the biggest hearing deception of all.

While deaf people sneeze naturally, hearing people feel compelled to add sound effects, in the form of that "ah-choo" noise.

All so they can be more socially acceptable.

Stop thinking you're a better person because you 'ah-choo,' my friend.

5. Looking away while communicating 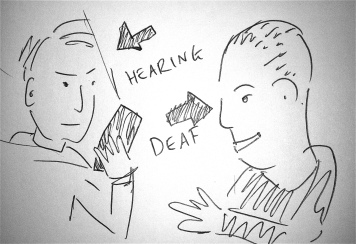 Hearing people look everywhere when you talk to them.

As if your conversation isn't interesting enough, they scan the room for other people who might have arrived. They glance at their iPhones in case they have a new message. Or they just stare at the blank wall behind you.

But, in a world of nearly six billion hearing people, one of them saw things differently, and perceived an advantage to the way deaf people interact.

We salute you, Bruno Kahne.

Kahne said in this Limping Chicken interview that hearing people could learn a lot from the way deaf people communicate, because deaf people give you their full attention.

He went on to run training courses in how to do this, and is now writing a book.

He's dead right. Because we lipread, we have to focus hard on people's lips (sorry if this makes you uncomfortable. By the way).

Because we're trying to figure out what you're saying, we can't switch off.

We give you our full attention.

Why not give us yours?

6. When you go a bit deaf, pretending you don't need hearing aids

This one's not aimed at hearing people per se, but rather, those who pretend they're still hearing, despite becoming a bit deaf.

What are they so ashamed of?

Rather than tell people that they don't understand things from time to time, they pretend they're not deaf at all. They live in denial.

Soon, their families become frustrated with them for not understanding anything, their neighbours wonder why the television has to be on so loudly all the time, and often, they retreat into a world of their own.

Rather than wear hearing aids and admit they're a bit deaf, they'd rather be thought of as a bit wacky and random. They'd rather be left out. It's funny in a way, except it's also very, very sad.

What's so bad about being thought of as being deaf, that you'd have to hide it? 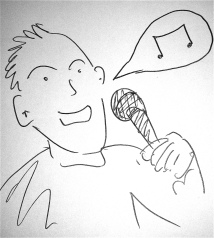 Ok, so this one isn't something we'd necessarily want to change. We don't want hearing people to start singing out of tune, that wouldn't be good for us, you, or anybody (although it'd be a lot of fun if it happened, en-masse, during an episode of The Voice).

We'd just like you to be a little less smug about being able to sing in tune.

When we sing along to a song, like The Beatles' "Let it Be," say, or a song from the musical Joseph, or even Happy Birthday -- just for the fun of it, just because we love the tune, or we're in the moment -- leave us be.

Don't tell us how bad we sound.

Don't act like we shouldn't even open our mouths in future for fear of offending your precious ears.

Don't -- whatever you do -- proceed to then sing it in tune, to show us how it should be done.

Accept it. Cover your ears.

Let us have our moment.

8. Not telling us your life story 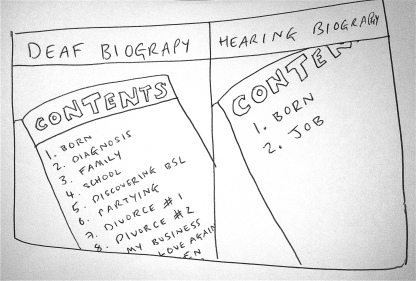 When you meet a deaf person for the first time, you don't just find out the standard bits of information about them: such as where they grew up, or what job they do.

You're also given exclusive access to their life story.

The exact genetic reason for their deafness. Their family history. Their school. A gritty breakdown of their last two divorces. The state of their current relationship, for good measure.

In roughly the first half hour.

On the other hand, when meeting hearing people, you just find out where they grew up and what job they do.

The rest takes a lifetime to find out.

Really knowing a hearing person takes real commitment, not only to years of friendship, but also years of piecing snippets of information together, while also lipreading what they're saying.

Why was your mother in law imprisoned somewhere on that family holiday?

We need to know. 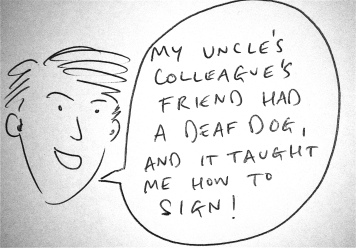 This one's pretty broad, but we make no apology for that.

Don't assume... that all deaf people are the same.

Some use sign language, and some lipread. Some like to use a sign language interpreter, others prefer speech-to-text. Some swing both ways on the above, but don't assume it's ok to call us 'swingers' as a result.

Don't assume... you're cleverer than us because we occasionally mishear something.

You might be cleverer than us, you might not. You won't know from judging how quickly we make sense of something you say. How about a game of chess?

Basically... don't assume. Or we'll assume things about you, too.

Or something along those lines. 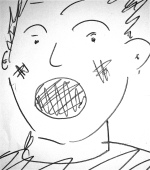 I'm finding it hard to understand you, my hearing acquaintance, so why not speak a little more clearly?

Stop mumbling and covering your mouth, or looking around the room.

Look at me, and maybe slow down a little bit.

Whatever you do, don't start SHOUTING at me.

It doesn't help me to understand you.

And it makes me feel a bit scared.

Enjoy reading this list? Now check out the 10 annoying habits of deaf people! It's only fair...

Have you noticed any annoying hearing habits not listed above? Tell us below!

DISCLAIMER: We apologize to deaf-aware hearing people who are guilty of none of the above, and also acknowledges that not all of you are like this. Just some of you. Quite a lot of you.

Charlie Swinbourne is the editor of The Limping Chicken, the UK's independent deaf news and blogs website, posting the very latest in deaf opinion, commentary and news, every weekday! Don't forget to follow the site on Twitter and Facebook. This article was first published on the site and is posted here by permission.