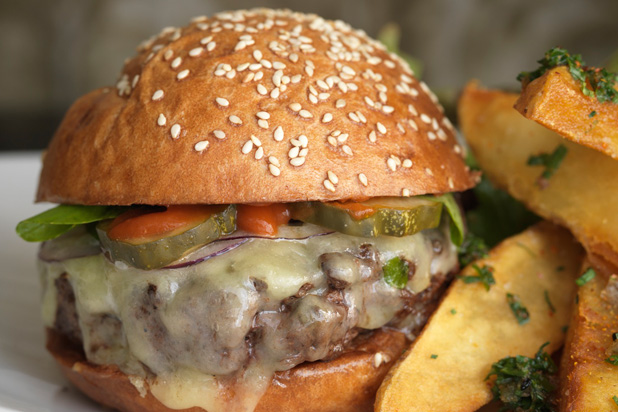 The hamburger is one of the culinary world's most storied, yet simplest, creations. It's just a patty of ground meat, on a bun. That's it. Yet this deceivingly simple dish is also one of the most difficult to perfect, and when it fails, it fails miserably. But when it succeeds, it can be life-alteringly delicious (Credit: Craigie on Main).

Click here to see The 40 Best Burgers in America

The burger as we know it traces its roots back to the Mongol Empire, and their tradition of mincing horsemeat was passed onto the Russians, who in turn brought it to the major port of Hamburg, Germany, in the early 19th century. The most common destination for ships departing from Hamburg was New York, and by the late 1800s restaurants in New York began serving Hamburg steaks, seasoned and cooked patties of ground beef, to German immigrants. According to Josh Ozersky's The Hamburger: A History, the oldest mention of a Hamburg steak on a menu was at New York's Delmonico's, a recipe developed by the great chef Charles Ranhofer.

The exact origin of the modern-day hamburger remains unknown, but there are several contenders for its creator. Perhaps the most well-known is Louis Lassen, who introduced a hamburger steak sandwich at his New Haven, Conn., restaurant Louis Lunch in 1900. Others claim that "Hamburger Charlie" Nagreen actually invented the dish at Wisconsin's Outagamie County Fair in 1885, and still others claim that the Menches brothers did it at an 1885 fair in Hamburg, N.Y.

Regardless of whomever first applied ground meat to bread, this quintessentially American food quickly caught on in popularity, not only because the concept of meat enclosed in dough is one that's nearly universally beloved (Cornish pasties, empanadas, Chinese roast pork buns, etc.) but because a burger is so customizable.

Everyone has his or her own perfect burger. It's the local burger place you grew up going to. It's the burger you ate that summer in your uncle's backyard. It's the burger you ate at three in the morning after partying all night with friends. Some will say that the perfect burger is a thin patty of ground chuck, cooked on a flattop until the exterior is browned and crispy, served on a steamed seeded Wonder bun with a slice of melted cheese and raw onion. Others will tell you that the perfect burger is a half-pound puck of short rib, sirloin, and brisket, adorned with balsamic caramelized onions, roasted tomato, and goat cheese, and nestled into a house-baked bun.

Even though the definition of a perfect burger is open to opinion, when you ask some of the country's most respected authorities on the subject, certain requirements become obvious, even though patty size and topping preferences may differ. The use of high-quality beef is crucial, for one, cooked with skill and care, served juicy and well-seasoned. "It should have spring if you poke the patty; a light crust is welcome, too," said one expert.

A great burger should also be well-proportioned and not overpowered by any one component. "The stack should not require an eater to unhinge his or her jaw," said one expert; "The perfect burger is greater than the sum of its parts and should offer synergy and balance," another agreed.

A truly transcendental burger, if we're going to get metaphysical here, also hits you on a deeper level than a run of the mill one, and you simply know it when you experience it. "The perfect burger is one that when it hits your mouth makes you forget about everything else that is happening around you," another said.

To come up with our ranking of America's best burgers we collected a list of our favorite burgers across the country, as well as iconic burgers we've heard about but have yet to try. Be it an offering from a high-end restaurant or a tiny, hidden hole in the wall, no burger was off-limits. We spent days combing through cities' best-of lists both in print and online, and reached out to a group of some of the foremost experts on burgers in America.

Our quest for America's best burgers took us down some interesting roads. We considered PYT in Philadelphia, for example, whose recent specials include a burger topped with bacon, goat cheese, and a Tastykake Koffee Kake, and one that replaces a bun with slices of deep-fried lasagna. We also came across Superior, Wis.' Anchor Bar, whose best-seller is a burger toped with Swiss cheese, onions, and raw cashews.

When it comes to burgers, the varieties really are infinite, which made it even more important that we assemble our list in the most scientific way possible: We divided our initial list of about 150 candidates into geographic regions, and recruited a panel of 30 noted chefs, restaurateurs, and food writers (including those mentioned above) to then place their votes for their favorites. The results were tallied, and our final list was then assembled.

We also made sure to keep it to just beef burgers, so while the lamb burger at New York's The Breslin would have ranked highly, that's a roundup for another day. You'll also notice that chains with more than 15 locations haven't been included, in order to give even the smallest burger joint its fair shake; those have been broken out into a separate slideshow.

So join us on a journey through 21 states in every region of this great country, as we present the finest examples of that quintessential and perfect American food, the burger. Click here for America's 40 Best Burgers.

The 10 Best Burgers in America
More:
slidepollajaxbest-burger-recipebest burgersTaste best-burgers-in-america
Newsletter Sign Up
An essential daily guide to achieving the good life
Subscribe to our lifestyle email.
Successfully Subscribed!
Realness delivered to your inbox