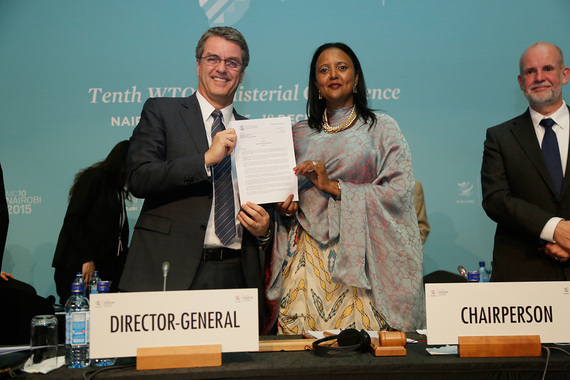 At the start of 2015, the prospects for an ambitious and successful outcome in Nairobi were dim and ominous. The pundits had forecast failure. The membership proved them wrong. We succeeded. We reversed the fortunes of the WTO and placed it on a clear trajectory of success. There is more work to be done but in Nairobi there was a sea change for the future of the Organization.

The Nairobi Ministerial was a negotiating Conference. It was neither ceremonial nor was it convened to endorse a predetermined outcome. Deadlock and unresolved issues were forwarded to Nairobi from Geneva. As we started the negotiations after the beautiful opening ceremonies the prospects were daunting. Some observers publicly declared that the omens for resolving the main issues around the Doha Declaration did not look good. Some even urged WTO Members to 'confront the prospect of definitive failure'? But members were undeterred.

Kenya's President, Mr Uhuru Kenyatta provided leadership and direction in his message to the membership by calling for a strengthened, relevant WTO, solving global problems and contributing to recovery and growth in the global economy with a successful outcome in Nairobi.

As the first African Chairperson of a WTO Ministerial Conference and the first to be held in Africa, it felt like the metaphoric Atlas carrying the weight of the World and more importantly how it would impact Africa, other parts of the developing world and the global economy.

The countdown towards that meeting would always comprise, in equal measure, foreboding and many sleepless nights combined with hope and a determination to ensure success however limited it may be. I was advised on the probability of no outcome.

As a salvage measure, several Minister colleagues, friends of Kenya, suggested a chairman's statement. The objective was to ensure that Kenya alone would not carry the cross of another failed WTO Ministerial. Although the odds were stacked against a successful outcome, Kenya was clear ab initio and in several key contacts around the world that Nairobi would be successful and that as chairperson I would not issue a Chairperson's statement.

It had to be all or nothing. I was dead set against writing an epitaph. It had also become increasingly clear that Nairobi provided the unique opportunity needed for the renewal and reinvigoration of the WTO. An organization that we all so passionately believe in. Above all failure was neither an option for the entirety of the African Union nor for Kenya and President Uhuru Kenyatta was clear on this.

The stalemate and inertia that had become commonplace had to be broken. The Jinx of no or minimum outcomes had to be banished. And "we would not declare victory in order to extract success from defeat" We needed to break the pattern of failure and It had to be executed in Africa, the so called weakest link in the rules based based Multilateral Trading System.

Nairobi was a classical negotiating situation. Chief negotiators came without revealing their bottom lines, largely restrained by domestic factors and pressures. Bridging those differences was considered by all trade experts to be impossible in the three day time available. The stakes could not have been higher. From clinching an elusive ITA to getting anything agreed on agriculture and the associated questions of public stockholding for food security and Cotton for the C4, to an equally challenging LDC package, or an acceptable future work programme for the WTO. And then there was the larger historic question of whether to reaffirm or not to reaffirm the Doha Round. It all seemed impossible.

But we rose to the occasion, designed a strategy and stuck to it with the assistance of a core group of Ministers, friends of the Chairperson and the Director General. I thank them for their contributions. We did not spare any effort nor waste any time. We had minimal sleep if at all and minimal nourishment.

For four days and three nights we negotiated and kept the entire membership informed and involved. There were no gaps. We could not afford them. The systemic support from the full spectrum of members in different formats and configurations was indispensable in the absence of which failure would have been certain. Their contributions were the litmus test of the premium they attach to the centrality of the WTO in global rule making. Doubts and questions about the superiority of the WTO in setting the bar for trade rules, vis a vis other arrangements were dissipated in Nairobi.

So what was achieved in Nairobi?

In all, the Nairobi meeting produced six Ministerial Decisions on agriculture, cotton and issues related to least-developed Countries.

First, a major breakthrough was reached in agriculture, with the immediate outlawing of export subsidies in developed economies and in developing countries by 2018 and LDCs by 2023. Export Credit and Food aid were also disciplined. This is a positive result for countries that rely heavily on agriculture for income and jobs. It represents a valuable leveling of the playing field and has the potential of lifting countless small holder farmers out of poverty. That is why the deal on agriculture was so widely popular and supported.

Second, another breakthrough, associated with agriculture but stand alone in its significance for Africa was achieved on Cotton, for long a question that had divided the membership. On the domestic support aspect, the Nairobi package acknowledges reforms by members in their domestic policy and regulations on cotton and underscores the scope for further reforms. The actual breakthrough was on export competition on cotton where Ministers decided on the prohibition of export subsidies immediately by developed members and developing countries to do so at a later date.

Fourth, in another significant outcome, members representing major exporters of IT products agreed, in the Information Technology Agreement, on a timetable for eliminating tariffs on various products, with all WTO members set to enjoy duty- free market access to the markets of the members eliminating tariffs on these products. Consequently, two-thirds of tariff lines will be fully eliminated by 1 July, 2016, with total elimination expected over three years. Affecting approximately 10% of global trade. For many countries in Africa active in the ICT space this agreement is a huge plus.

The fifth outcome of significance is for LDCs, the Nairobi package contains decisions of specific benefit to LDCs such as, enhanced preferential rules of origin and preferential treatment for LDC services providers. MC10 decided on the facilitation of opportunities for LDCs export of goods to developed and developing countries pursuant to unilateral preferences.

No less important Nairobi advanced the strategic objective of the organization of universality of membership by approving the terms and conditions of membership of Afghanistan and Liberia, two least developed countries.

We loosened the knot on the systemic question of the relevance of the WTO regarding the consideration of new issues. It is hugely significant that we accepted that some WTO members may wish to raise other negotiating issues in the WTO. However, coupled to this recognition was the decision that a consensus would be required before the launch of these negotiations. This formulation protects all interests and is an important step forward for the institution.

Finally, substantively, Ministers confronted head on the major negotiating question of the continuity of the fourteen year Doha Round mandate. The question was whether to reaffirm that mandate or not. There was an honest division among the members. As in all negotiating situations, where positions are unbridgeable the polar positions were acknowledged in the Nairobi Declaration. As the Chairperson of the 10th Ministerial this outcome was not fatal for the WTO. As in the expression "reasonable individuals can disagree".

It is clear to me that the successful results from Nairobi were not the end. The WTO has been reset and is now pointed in the right direction. We must now set ourselves to the huge task ahead of us. This requires leadership.

Coming on the heels of a successful COP 21, the WTO meeting in Nairobi has clearly demonstrated, the value and centrality of multilateralism.

Ambassador Amina Mohamed is the Cabinet Secretary for Foreign Affairs and International Trade, Kenya and was the Chairperson of the 10th WTO Ministerial Conference.