Alexander Osterwalder invented the Business Model Canvas, co-founded strategyzer.com and was the lead author of Business Model Generation which sold a million copies in 30 languages. 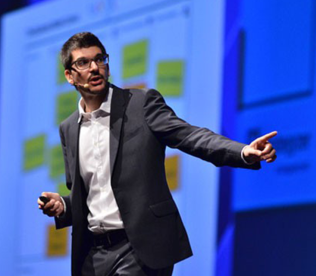 Alexander and I often collaborate on new ideas for corporate innovation. Here's his guest post on what bad habits to avoid inside of a company.
---
Big companies have great execution habits to manage and improve successful business models and value propositions. But the habits that foster execution can easily kill new growth initiatives inside your company.

Bad Habit #1: The current business model dominates the agenda
In most companies the future suffers at the expense of the present. Companies are great at improving their existing business model and value propositions, but fall short when it comes to inventing entirely new business models, value propositions, and growth engines. In fact, by the time a company realizes it needs to reinvent itself for future success, it's often too late. This happens because managing the present often takes oxygen away from inventing the future. Rita McGrath, a Columbia Business School professor says, "there's pleasing today's customers and there's developing tomorrow's business." You need to be excellent at both.

Remedy: Create a protected space in your org chart where you invent and test new business models and value propositions. Equip this "space" with power and prestige. Become an ambidextrous organization -- one that is excellent at managing and improving your existing business, alongside inventing new ones.

Bad Habit #2: One-size-fits-all decision making hurts speed & inventiveness
Companies that grow in size and scale proven products and services can quickly fall into a trap of slowness, unthoughtful risk aversion, and failure to experiment. As Jeff Bezos puts it, one-size-fits-all decision making "hurts speed and inventiveness" inside large organizations. In fact, Bezos constantly adjusts Amazon's culture to ensure that the company never slows down and loses its entrepreneurial and nimble approach to finding future business success.

Bad Habit #3: Insisting on untested and detailed business plans
Most established companies require detailed business plans for new ideas. This results in carefully crafted and thought-through documents with detailed spreadsheets and a great focus on how an idea will be implemented. However, the first goal of an innovator should not be to think hard about an idea and describe its implementation. First and foremost, an innovator's job should be to rapidly, cheaply, and continuously test and adapt ideas until there's enough evidence from the field to prove they will work. Only the latter helps avoiding big flops because it systematically reduces the risk and uncertainty of new ideas. Business plans actually maximize the risk of failure because of the focus on executing an unproven idea rather than testing it.

Remedy: Use business plans only for execution of existing businesses. Don't ask innovators for business plans. Instead, implement processes that force innovators to systematically prototype and test ideas, reduce risk and uncertainty, and ultimately provide the evidence that an idea will work and is worth doing.

Bad Habit #4: Opinions matter more than evidence
Senior leaders acquire a lot of knowledge and experience about their business over the course of their career. Unfortunately, this knowledge may be irrelevant when it comes to new value propositions and new business models. For example, the knowledge that Kodak's leaders acquired during their successful decades in analog film didn't equip them for digital photography. Quite the contrary. The rules to compete in the digital age are completely different. That's why it's so important for companies to "get out of the building" and interact with customers. Steve Blank, father of the Lean Startup movement, stresses that you will never know enough about your customers if you are holed up inside a boardroom. A good idea might still be a bad idea because customers don't care about it. Michael Schrage, a research fellow at MIT, emphasizes that "a testable idea is better than a good idea".

Bad Habit #5: Outsourcing customer discovery and testing
Large companies have a habit of hiring outside agencies to do market research and customer discovery. That's dangerous when it comes to developing new value propositions, business models, and growth engines. You can't hire outside professionals to test and learn from customer interactions and make decisions for you. New ideas require many rapid iterations between prototyping, immediately testing with customers, and then deciding how to adapt your idea based on the acquired insights.

Remedy: For radically new ideas you should defer hiring outside agencies until you've found product/market fit. Instead, roll up your sleeves and internalize the hard work of rapid prototyping, testing, learning, and deciding. Third parties can help you with the process, but they can't do the work for you.

Bad Habit #6: Senior leadership too busy for hands-on innovation
Senior leaders are very busy and time pressed people. Typically, they see the "getting out of the building" to test ideas with customers as a task to be performed by subordinates. But leaders have to be more than just sponsors of new business ideas. Decision makers are the ones who can make things happen. They are the ones who need to feel the market and talk to (potential) customers to learn that some of their initial assumptions or strong opinions might be completely wrong. Equipped with these market insights they can help move things faster.

Bad Habit #7: Obsessing about competitors rather than customers
Unfortunately, many companies are more obsessed by their competition than their customers. Your customers are far more important than your competitors. Your (potential new) customers can tell you how to beat your competitors. Customer have the evidence your organization needs to validate or invalidate new business ideas and potential growth engines. That doesn't mean you should completely ignore the competition. After all, business models and value propositions aren't designed in a vacuum. However, competitors should not be your primary focus. As Steve Blank says, "You can't drive forward by looking in the rear view mirror."

Remedy: Obsess over your customers first when developing and testing new value propositions, business models, and growth engines. Then, evaluate how these new ideas perform in the competitive landscape.

Bad Habit #8: Focus on technology risk at the expense of other risks
New business ideas face many different risks. The California design firm IDEO distinguishes between three types of risk when they assess prototypes: desirability, feasibility, viability. Desirability is about the risk of your customers not being attracted by your new value proposition. Feasibility is about technology and infrastructure risks. Viability is about financial risks. We added a fourth risk, adaptability. Adaptability is about the risk of a business model and value proposition not being fit for evolving external factors, like competition, technology change, or regulation (risk: external threats).

Remedy: Make sure you test all four types of risks: desirability, feasibility, viability, and adaptability.

Bad Habit #9: Innovation is career limiting
In many companies being an innovator is not an attractive career path. First, in most organizations any type of failure is seen as a negative for your career. Yet good innovation processes require rapid experimentation and failure to gain insights, adapt, and ultimately succeed. Second, corporate incentives are geared to rewarding execution, where failure is not an option. Third, in most companies, innovation is still seen as a department for pirates and "the crazy ones" who really add no value to revenue and profit. And finally, prestige in companies is measured by who commands the largest budget and staff. But great innovation programs always start small.

Bad Habit #10: Innovation is siloed from Execution
Companies struggle to get the "execution engine" and "innovation engine" to collaborate, rather than to compete. Rather than realizing that managing the present and inventing the future are equally important and should be equally resourced, they often fight for the same resources. Often the execution engine deprives the innovators from access to valuable resources like customers, brand, or skills. That means the innovators end up competing without any competitive advantage against the more nimble and agile startups.

Remedy: Create a culture where executors and innovators collaborate because they understand each other's value to the organization. Create processes and incentives that grant innovators access to customers, brands, and skills so they can outcompete the more nimble and agile startup ventures.

Bad Habit #11: Integrating new ideas into the execution engine too quickly
New ideas are fragile and they need to be carefully nurtured and scaled before they are integrated into the execution engine with its rigid processes, key performance indicators rules, and procedures. If you integrate new ideas before they fully mature you might kill them. For example, Nespresso, the successful daughter company of Nestlé, only survived and thrived because they were physically distant from Nestlé's headquarters.

Remedy: Protect new ideas until they fully mature; for example, like in Nestlé's case, by locating the project outside of the company's headquarters.