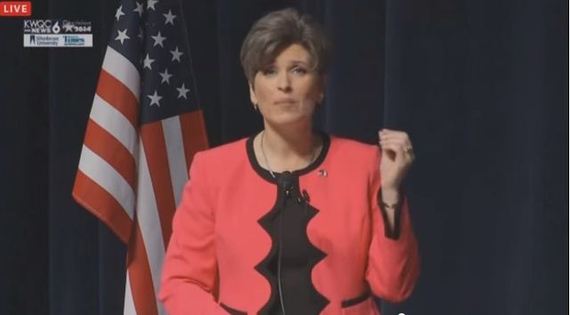 Joni Ernst is different because she's more dangerous. Unlike those other two faded Tea Party stars, Ernst comes across as slightly less unhinged, and thus more electable. And she has worked tirelessly since her June primary victory to distance herself from the hard right positions she had previously taken on most issues.

But although she's done a good job of hiding them, Ernst's ideas are as far outside the mainstream as any of the nonsense that spews from Palin or Bachmann's Twitter accounts. An ad released over the summer by the Democratic Senatorial Campaign Committee featured Ernst calling Palin the "type of people that we need in our federal government," and that she was "just absolutely ecstatic to have her endorsement" after Palin backed her in the Republican primary.

Ernst, a first-term Iowa state Senator, faces four-term Democratic U.S. Rep. Bruce Braley, founder of the House Populist Caucus, in a toss-up battle for retiring Senator Tom Harkin's seat. If she wins, the GOP will probably latch onto Ernst as its latest national figure. As the rise of Palin and Bachmann showed, the GOP desperately needs more women in its ranks to counter its image as the party of rich, old white men. Of the twenty current female U.S. Senators, sixteen are Democrats and only four are Republicans, out of 45 GOP Senators in total.

Here are the top twelve reasons Joni Ernst has had to battle the glaringly obvious perception that she's "too extreme for Iowa":

(1) Wants to abolish the Environmental Protection Agency, IRS, and the U.S. Department of Education. In an April debate, Ernst called for shutting down all three federal government agencies.

(2) Opposes abortion with no exceptions for rape or incest, and believes doctors who perform abortions should face criminal punishment. In 2013, Ernst co-sponsored a fetal personhood amendment to the Iowa State Constitution that would have outlawed abortion, and contained no provisions allowing for rape or incest exceptions. In a May debate, Ernst said, "the [abortion] provider should be punished, if there were a personhood amendment."

(3) Believes "the UN is behind" a conspiracy that involves, in Ernst's words from a November, 2013 campaign event, "moving people off of their agricultural land and consolidating them into city sectors and then telling them, 'You don't have property rights anymore'." This right-wing theory has been widely debunked as a myth.

(4) Not only opposes raising the hourly minimum wage in Iowa from $7.25 to $10.10, as her opponent Bruce Braley has called for, but wants to eliminate the federal minimum wage altogether. At a candidates' forum in March, Ernst said she thinks "$7.25 is appropriate for Iowa."

(5) Supports a flat tax on income, which would give enormous tax cuts to the super wealthy and shift the country's tax burden further onto middle class and low-income families.

(6) Wants to send U.S. ground troops back to Iraq. In the campaign's third and final debate earlier this month, Ernst said she agreed with those who had "advised that we keep troops on the ground." "There is overwhelming support coming from the American people," she claimed.

(7) Thinks President Obama "has become a dictator" who "is not following our Constitution," and that "he should face...repercussions, whether that's removal from office, whether that's impeachment." She expressed these views at a candidates' forum last January.

(8) Has repeatedly called for an Ebola travel ban, prohibiting all flights into the U.S. from West Africa, which experts and sane observers agree wouldn't work and would actually make the global outbreak worse, plus lead to more U.S. cases of the deadly virus.

(9) Believes George W. Bush's discredited fairytale that there were WMD's in Iraq when the United States invaded in 2003. "I do have reason to believe there were weapons of mass destruction in Iraq," Ernst told the Des Moines Register's editorial board in May.

In response to a 2012 questionnaire from a libertarian-leaning group, Ernst replied "yes" to the question "Will you support legislation to nullify ObamaCare and authorize state and local law enforcement to arrest federal officials attempting to implement the unconstitutional health care scheme known as ObamaCare?" - Salon, 10/3/14

(11) Wants to privatize federal student loans. At an Iowa State College Republican Forum in April, Ernst said, "our students...we need to ensure that they're able to find student loans at reasonable rates within private banking entities. So let's get the federal government out of the business of student loans." Asked about her views on college affordability in August, Ernst replied, "Perhaps all of our students don't need four-year degrees."

(12) Can't see a need to change current campaign finance laws, because she believes in "political free speech," as she stated at her third and final debate with Bruce Braley, who is a strong supporter of campaign finance reform. Interviewed by Rachel Maddow in 2012 about how Citizens United had unleashed a whirlwind of big money into politics, Braley warned that "very powerful, monied interests are trying to buy the government they want. And have no restrictions, literally, on what they can spend."

In the most recent fundraising quarter, Ernst raised more than any other U.S. candidate for office in a single quarter during this election cycle. From July to September, her campaign took in a whopping $6 million, outpacing Braley's $2.8 million haul by more than 2-1. By comparison, Senate Minority Leader Mitch McConnell only raised $3.2 million during the same period, despite being the top Senate Republican and facing a competitive, well-funded challenge from Kentucky Secretary of State Alison Lundergan Grimes.

Clearly, a lot of wealthy GOP donors very badly want Joni Ernst to be the next U.S. Senator from Iowa. And they are salivating at the possibility of her extreme right-wing views influencing the laws of our land at least through the year 2021. It's a thought that ought to give every sensible American cause for concern.