The New York Film Festival celebrates its 54th year by trying something new. For the first time in history, its Opening Night World Premiere will be a documentary. Even more noteworthy, this non-fiction film is by director Ava DuVernay (Selma) and it focuses on America's deep problem with its criminal justice/penal system and how it affects the black community. Screening DuVernay's thought-filled The 13th, helps NYFF make a social/political and cultural statement that may resonate for years. 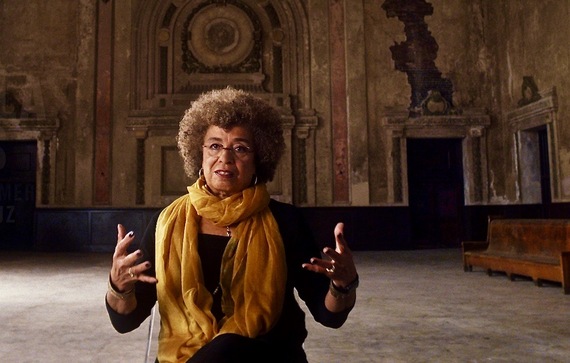 (Photo courtesy of Netflix)
Social activist and scholar Angela Davis is interviewed in the documentary The 13th.

Normally, analyzing racism, inequality, involuntary servitude, prison systems and police brutality is such a vast endeavor it would take a collection of books, a string of college courses or a PBS miniseries to begin to understand such complex subjects and their many ramifications. In 1hr 40 min, DuVernay masterfully takes on that arduous task, shares some illuminating analysis and starts a conversation.

With photos, archival footage and interviews, she presents something akin to a condensed post graduate course that delivers facts, figures, history, parallels, anecdotes, observations and controversial incidents that corroborate her thesis. What's on view is an equal dose of academic study, solid journalism and deep emotion that will provoke anger, sadness and hopefully motivation for change.

DuVernay's mission is aided by scholars (Henry Louis "Skip" Gates Jr.), political commentators (Van Jones), unlikely sympathizers (Newt Gingrich) iconic activists (Angela Davis) and politicians. United States Senator Cory Booker: "We are a nation that professes freedom yet have this hyper-incarceration system that is grinding into it our most vulnerable citizenry - and is overwhelming biased towards people of color."

DuVernay connects the dots between the liberation of slaves by the 13th Amendment signed on January 31, 1865, to the convict leasing that followed, then the Jim Crow system of apartheid, the FBI's war against black activism and today's rampant incarceration of largely poor black men. Over 100 years of systemic oppression, dehumanization and what Jelani Cobb, Director of the Institute for African-American Studies, calls "a mythology of Black criminality."

Some of what she points out has been said before, and she is reinforcing it. However, lots of the information she's bringing to light will be alarming news to most viewers: e.g. Did you know that the American Legislative Exchange Council (ALEC), a nonprofit organization of conservative state legislators and private sector representatives, drafts and shares model state-level legislation that legally lets businesses take advantage of free labor by prisoners?

The film is a revelation on so many levels. When it ends, the feeling of anger and sorrow is almost overwhelming. There's also a nagging feeling that you wish you had step-by-step instructions on how to help break the cycle and make a change. Even just as a coda with a list of some actionable steps would empower viewers. It would have been helpful if the film had mentioned the importance of: voting, running for office, community activism, joining police departments to make change from within, gun control, decriminalizing drugs, etc. Problems, like the ones depicted in this very observant film, only get solved when someone takes a first step.

Programming The 13th as the opening night film for the 2016 New York Film Festival was a stroke of genius and innovation.