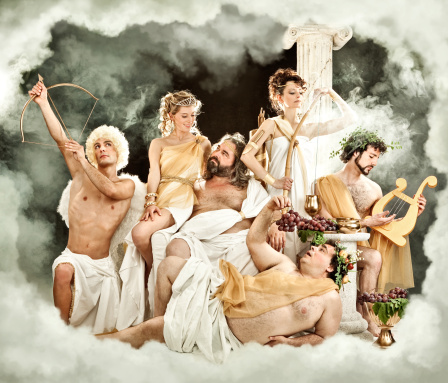 What do the Colossus of Rhodes, the Hanging Gardens of Babylon, and the Mausoleum at Halicarnassus have in common? Okay, granted, they are three of the only places in the world never considered for Taco Bell franchises. But they are also three of the fabled "Seven Wonders of the Ancient World." And my mother says I'm wasting my time watching Jeopardy. Hah!

The other Wonders are the Artemesion at Ephesus, the Olympian Zeus, the Tower of Pharos and the sole wonder remaining today -- the pyramids of Egypt. That one, unfortunately, does have a Taco Bell franchise, though I understand the camel chimichangas are to die for.

But just as these Seven Wonders were indicative of the ancient world's proudest, most impressive, highest levels of achievement -- the ancients also had things they were less proud of, nay, even by which they were embarrassed -- the Edsels, EuroDisneys, and Howard the Ducks of their day. Here then, just to keep history in perspective, are the 15 embarrassments of the Ancient World:

The Graffiti At Jericho, 9000 B.C. The first historical occurence of graffiti. Completely marred the beautiful walls of Jericho, with such slogans as, "Gilgamesh Loves Pepi," "Joshua Bites," and "For A Good Time, Call Angie."

The Sumerian Spitting Olympics, 3500 B.C. Contestants competed in a variety of events, including the "Hawking a Loogie Relay," "Who Can Make the Funniest 'Boinging' Sound Into the Spitoon?," and the "Phlegm Art Competition." Event slogan was, "Just like the regular Olympics, only moister."

Mesopotamian Moe, 2300 B.C. History's first and most successful used-chariot salesman. Would clinch the deals saying things like, "It's only been driven once, by a little old shepherd from Crete," "I stayed up all night rubbing it down with pure olive oil, so it's real cherry," and "Okay, so go back to riding your goat -- just see how many girls you get then, big shot."

Sherman of Stonehenge, 2000 B.C. A 300 foot-high stone sculpture of a grotesque fat man mooning Ireland. This not only did little to ease British-Irish relations, but also was the focal point of the irate local neighbors' "Tear Down Sherman of Stonehenge" campaign. Was briefly replaced with a sculpture of Cleopatra doing a lap dance before early feminists defaced it.

Assyrian Paint-By-Number Mural, 1260 B.C. World's first paint-by-number portrait of King Shalmaneser flossing. The King absolutely loved this revolutionary technique. His enthusiasm inspired its creator to originate silly putty, slinky, and the hula hoop. Humiliated by his inability to use the hula hoop, the King had the talented creator beheaded.

Homer's Judy, 850 B.C. Flush with success from his two epics, Iliad and Odyssey, Greek poet Homer spent the next four years on what he fully expected to be his masterpiece -- Judy, an epic poem about a double-jointed female gymnast who travelled the ancient world acting out history's greatest events through nude cartwheels and handsprings. Unfortunately, the woman upon whose life this was based sued Homer successfully to block publication.

Confucius Doorknocker, 460 B.C. When you used the doorknocker, it would swing through the door on the other side, banging into a servant's head. The servant would then wake up and announce your presence with a Confuciusism, such as, "Confucius say 'He who ignores Ho Tsi Fu at door, will never know what Fu wanted.'" After two trial months of the product, enthusiasm for it was lessened by a series of servant concussions.

Parthenon Pay-As-You-Go, 430 B.C. World's first pay-toilet system was briefly popular for its novelty and hipness. Dates would often end their evenings here. One day however, Pilobolus of Partha happened to remark, "You know, I just went outside against the wall -- you fools are just wasting your shekels." Rioting ensued and the pay-as-you-go was torn down.

Aristoxenus Misunderstood, 320 B.C. Greek musician originates world's first musical theory, defining rhythm as tripartite: speech, melody, movement. Hailed as a genius, Aristoxenus was discredited and stripped of his honors ten years later when his co-workers admitted they never understood his theories, and still don't, but didn't want to be the only ones to admit to it.

Temple to the Sun God's Nephew, Edfu, 230 B.C. World's most successful lobbying effort by Edfu himself, a charismatic speaker and in reality just an insurance salesman, who convinced the Pharoah both that Edfu was the Sun God's nephew and that the Sun God wanted the Pharoah to build Edfu his own temple -- with a bowling alley. The Pharaoh was later thrown out of the country after an inventor convinced him it was the will of the gods for him to spend half his country's fortune on chia pets.

World's First Fraternity. 90 B.C. Students at Athens U. formed Alpha Beta Gamma as a private social club, but the college ordered it disbanded due to repeated complaints of wild toga parties, panty raids, and hazing initiation ceremonies, one of which involved the inductees being forced to streak naked through the Acropolis, screaming "Excuse us, have any of you seen our clothing?"

Adoption of the Sidney Calendar, 74 B.C. For a 10-year period, the ancient world operated on this calendar system, consisting of just one month, containing one day. Among its many drawbacks: all holidays had to be on that day; everybody had the same birthday, so there could only be one big party once a year; and if you missed a day of work, you were docked for the entire year.

First Book of Algebra, 225 A.D. Diophantus of Alexandria produces the world's first book explaining algebraic equations. It was not understood until 476 A.D., and even then, it was sold packaged with a bottle of aspirin.

The First "God, You are So Incredible" Hymn, 390 A.D. Caught on in Rome almost immediately becoming wildly popular, and replacing the previously sung "These Chairs are Really Uncomfortable But We Get to See Each Other Wearing Our Best Clothing" hymns. Finally, the "Hallelujah" hymns gained prominence.

The Bladderscope, 650 A.D. Became wildly known as the least-popular medical instrument used in India. Common sayings about its use included, "Okay, I'll see a doctor, as long as he doesn't use the bladderscope on me," "Hey, if it's not so painful, let's see you volunteer for a bladderscope check-up," and "Dying is easy -- a bladderscope exam is hard."