From mountaintop monasteries to super-modern temples, these amazing places will make you believe. We've gone through the tips and photos of more than a million travelers on minube to find these places which inspire, astound, and simply take our breath away. From the jungles of Indonesia to the valleys of Tibet, here at the 19 most breathtaking holy places around the world. 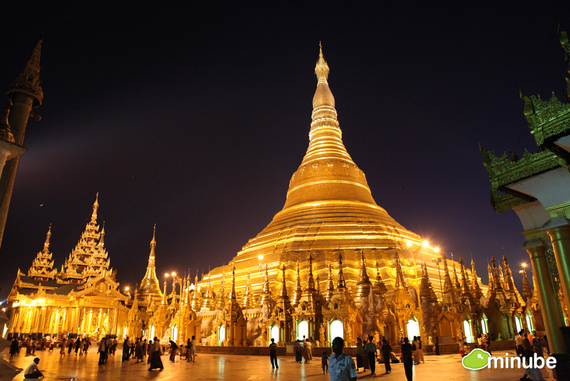 1.) Shwedagon Pagoda, Myanmar - Rising 100 yards above the city of Rangoon, Myanmar's Shwedagon Pagoda is, according to many travelers, one of the world's great wonders. The pagoda is famed for holding the relics of four Buddhas and savvy visitors should visit at night to enjoy the chants of the faithful, the wafting incense, and the great golden stupas shining in the spotlights. (Photo by Gerard Decq) 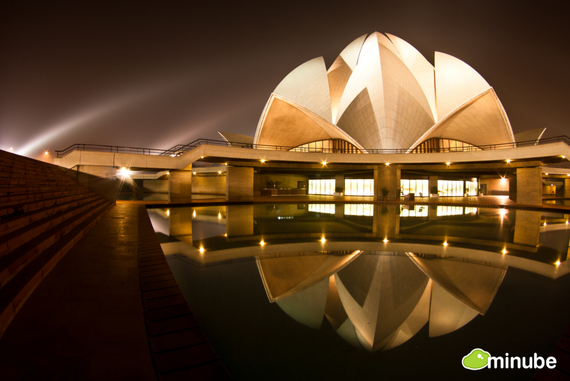 2.) Lotus Temple, India - The city of New Delhi isn't exactly known for peace and quiet, but the stunning Lotus Temple, home of the Baha'i faith, is a true oasis of tranquility. Built in 1980, the flower-shaped temple is surrounded by peaceful gardens and a large interior space is reserved for people of all faiths to come and meditate. (Photo by Sebastian D. Caicedo)

Click here for more photos of the Lotus Temple 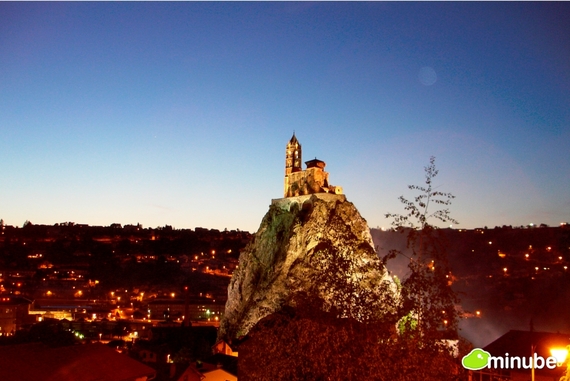 3.) Saint-Michel d'Aiguilhe Chapel, France - Southern France is dotted with scenic mountaintop churches, but none are quite as breathtaking as the chapel of Saint-Michel d'Aiguilhe. After climbing over 200 steps up a craggy volcanic rock, visitors find a wonderful 10th-century church and absolutely gorgeous views of the surrounding village. (Photo by Soleilhac Marie-Laure) 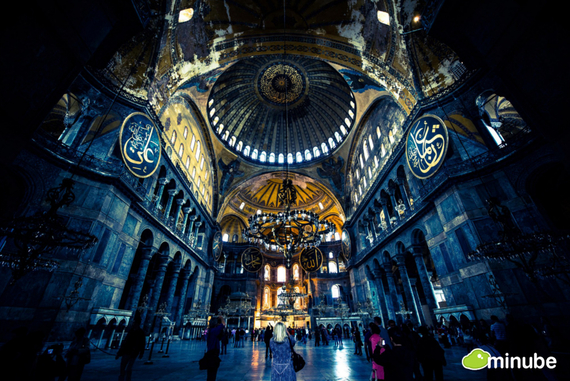 4.) Hagia Sophia, Turkey - What can we say about the Hagia Sophia? It's one of the oldest and most architecturally influential places of worship in the world. While it's famous for its awe-inspiring domes and Byzantine mosaics, the fact that travelers from all cultures and religions flock to behold her glories is what truly makes the Hagia Sophia special. (Photo by Dripta Roy)

Click here for more photos of the Hagia Sophia 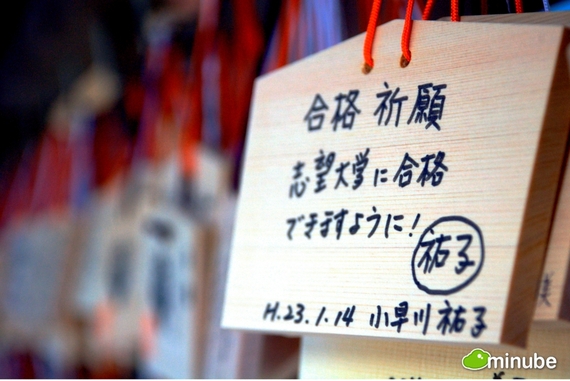 5.) Meiji Shrine, Japan - The Meiji Shrine is a Shinto shrine in Tokyo originally built in honor of Japan's first modern emperor, Emperor Meiji. While surrounded by Tokyo's ultra-modern skyscrapers, the Meiji Shrine is nestled in over 150 acres of peaceful evergreens and is traditional favorite of Tokyo residents, many of whom come here to meditate, attend a traditional wedding, or simply enjoy the fresh air. (Photo by Patrick)

Click here for more photos of the Meiji Shrine 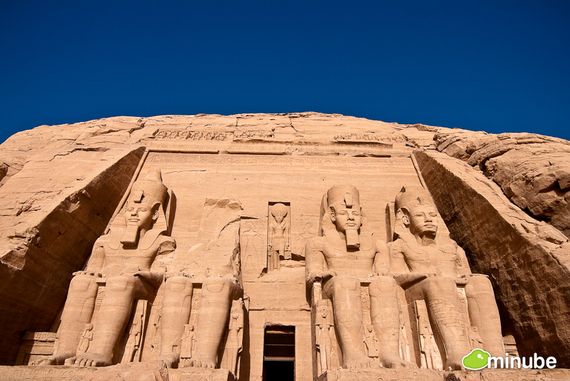 6.) Abu Simbel Temples, Egypt - Though built by the famous Pharaoh Ramesses II over 3,000 years ago, the Abu Simbel Temples and their stunning colossi are more famous than ever. The two temples of Ramses II and Nefertari were carved directly into the rock and their interiors feature gargantuan columns lined with hieroglyphics. (Photo by Jose M. Cuesta) 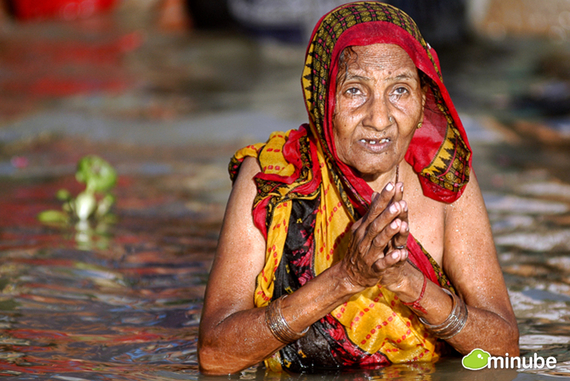 7.) Ghats of Varanasi, India - Varanasi is the holiest of India's sacred cities and famous for its ghats, terraced areas on the river banks where the faithful come for ritual baths, washing, meditate, and even cremations. Described by travelers as powerful, visceral, and overwhelming, a boat ride along the ghats at dawn is something that no traveler ever forgets. (Photo by Beatriz)

Click here for more photos of Ghats of Varanasi 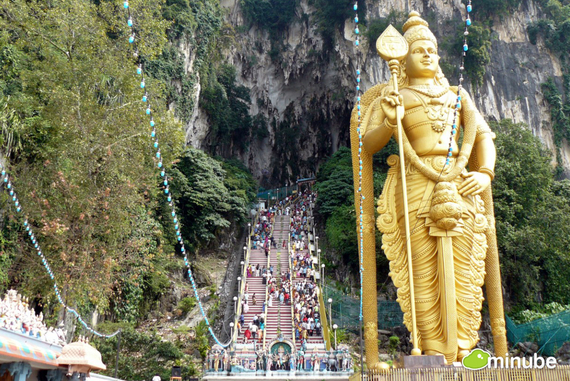 8.) Batu Caves, Malaysia - Located just north of Kuala Lumpur, the Batu Caves are one of the most amazing sight in all of Asia. The complex consists of massive limestone caves filled with intricate shrines, a 140ft. tall statue of the Hindu deity Murugah, and lots and lots of mischievous macaque monkeys ready to snatch a snack from unsuspecting tourists. (Photo by Macgreg)

Click here for more photos of the Batu Caves 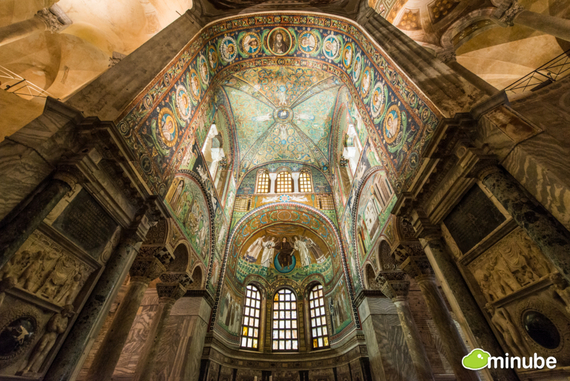 9.) Basilica of San Vitale, Italy - The Basilica of San Vitale in Ravenna, Italy is one of the most important churches in early Christianity, a UNESCO World Heritage Site, and an amazing experience for lovers of art and architecture. The hypnotically colorful mosaics are some of only a few in the world that remain from the time of Emperor Justinian I. (Photo by Ignacio Izquierda)

Click here for more photos of Basilica of San Vitale 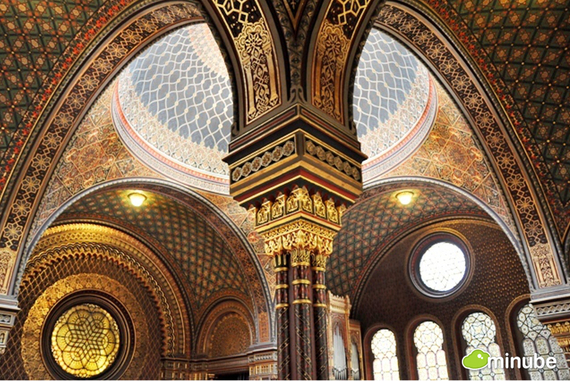 10.)Spanish Synagogue, Czech Republic - Widely regarded as Europe's most beautiful synagogue, the Spanish Synagogue in Prague is one of those places where you could literally spend hours admiring the Moorish-style geometric carvings and paintings covering literally every square inch of the interior. Don't forget to check out the statue of famous Czech author Franz Kafka near the entrance. (Photo by Alce)

Click here for more photos of the Spanish Synagogue 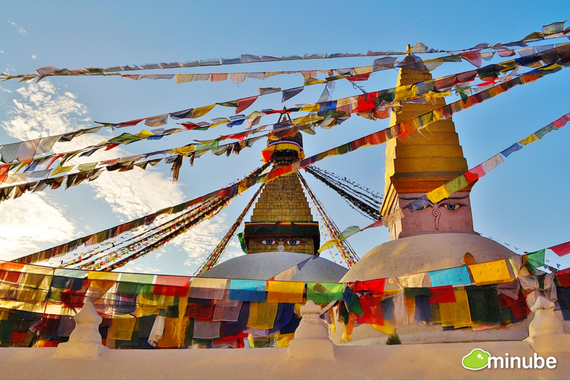 11.) Boudhanath, Nepal - Located in the outskirts of Kathmandu, Boudhanath is one of the world's largest stupas and a place of pilgrimage for Tibetan Buddhists the world over. The stupa is crowned by four sets of peaceful yet watching eyes and is surrounded by a whopping 50 Buddhist monasteries. (Photo by Nice Dalla-Valle) 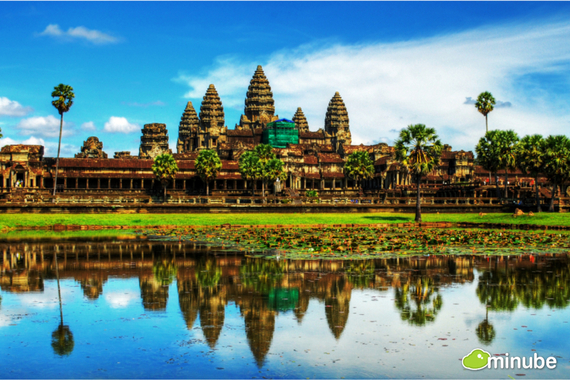 12.) Angkor Wat, Cambodia - The mighty Angkor Wat complex in Cambodia is another site which is tough to describe in words. To visit Angkor Wat is to immerse yourself in countless 900-year old temples, massive stone faces, sprawling jungles, and groups of young, saffron-robed monks. If it's not on your bucket list, it should be. (Photo by Natashi Basso). 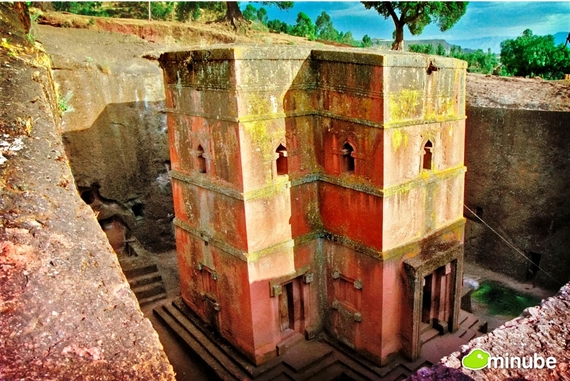 13.) Bet Giyorgis, Ethiopia - Bet Giyorgis ("Church of St. George") is a 12th-century church carved directly into the rock around Lalibela, Ethiopia. Bet Giyorgis, though, is just the most famous of 11 churches carved into the bedrock originally designed to emulate Jerusalem. Travelers can explore this most unique of holy sites via winding tunnels and passageways dozens of feet below surface level. (Photo by Alfonso N. Tappero) 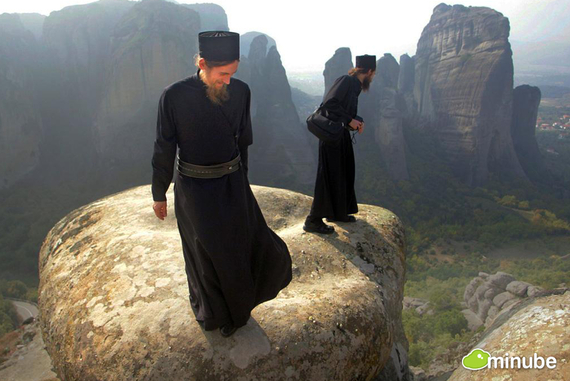 14.) Meteora, Greece - Near the village of Meteora in central Greece, massive monolithic stones jut into the sky creating one of the most gorgeous panoramas in Europe. The best part? The hulking cliffs are dotted with historic monasteries, many of which can be visited and are still in use today. After visiting the monasteries, travelers can make the hike back to the bottom while savoring the heavenly views. (Photo by Vlaidmir Bazan) 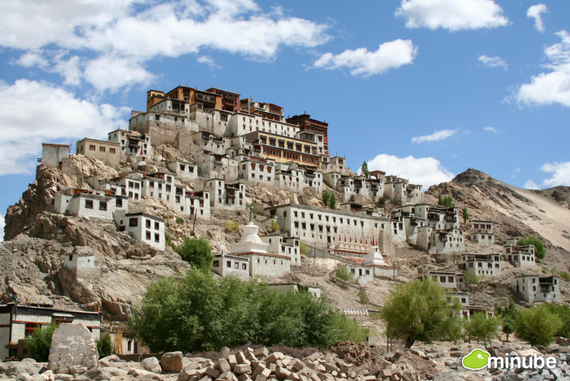 15.) Thikse Monastery, India - The Thikse Monastery is one of the most spectacular yet least touristy monasteries in the Indus River Valley near Ladakh, India. Those who've explored the Tibetan plateau can attest that coming around a river bend to see the white-washed monastery and its colorful prayer flags against the clear blue Tibetan sky is truly an inspirational sight. (Photo by Gerard Decq)

Click her for more photos of the Thikse Monastery 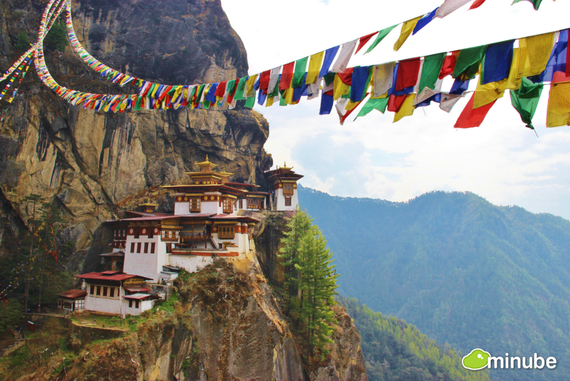 16.) Tiger's Nest, Bhutan - The Tiger's Nest complex in the small mountain state of Bhutan is perhaps the world's most famous hanging temple, and with good reason! After a tough three-hour hike, travelers arrive at this stunning monastery perched 3,000ft. above the floor of the Paro Valley. The interior shrines are no doubt amazing, but the view is one you'll never forget. (Photo by Thomas Willetts) 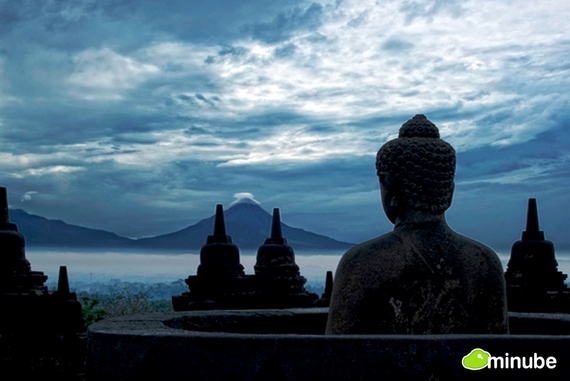 17.) Borobudur, Indonesia - Emerging from the jungles of central Java, the 9th-century Borobudur temple complex is a marvel of Buddhist architecture and the most-visited sight in Indonesia. At 7 stories high and decorated with over 500 Buddhas, Borobudur is the largest Buddhist temple in the world and home to what is surely one of the most beautiful sunsets anywhere. (Photo by Oliver P. Martin) 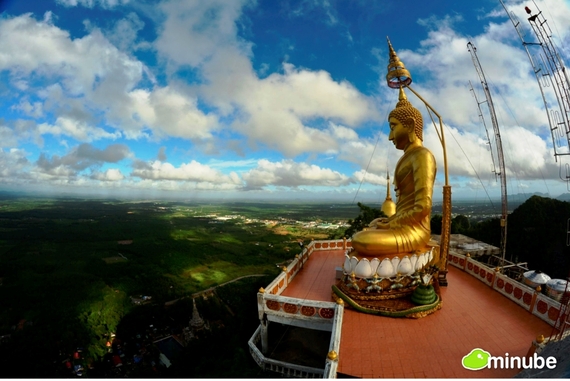 18.) Tiger Cave Temple, Thailand - Many travelers to Krabi, Thailand spend their time between the bar and the beach, but the area is home to one of the world's most breathtaking religious sites: the Tiger Cave Temple. Travelers must climb a jungle staircase lined with monkeys and hidden shrines before arriving at the glorious golden Buddha at the 2,000ft. peak. (Photo by Angelo Zinna) 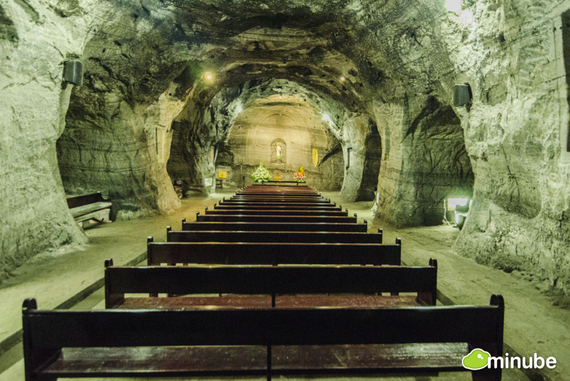 19.) Salt Cathedral of Zipaquirá, Colombia - The Salt Cathedral in Zipaquirá, Colombia is one of the most unique and otherworldly holy places in the world. The cathedral was built using the massive galleries of an old salt mine and is decorated with colored lights that add a mysterious and dramatic touch to the various chapels and hidden corners within. (Photo by Jose. M.M. Espinar)

How To Take Great Family Photos On An iPhone, According To Photographers